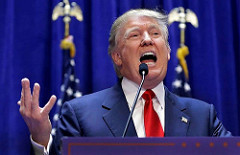 At a recent political rally, Donald Trump said "I am an evangelical. I'm a Christian. I'm a Presbyterian." He then said, referring to Ted Cruz, that "not a lot of evangelicals come out of Cuba, in all fairness."

No one can see into the heart of another person. What we can do, however, is evaluate their words and deeds. We should do so not to condemn, but rather to understand and move closer to the truth. No one who is a follower of Jesus can correctly claim that their words and deeds always match their professed beliefs. Mine do not. My concern is not whether Trump really is a Christian, though I admit I have serious doubts. Rather, my concern is whether his stated views and beliefs line up with Christian thought. And it is clear that many of them do not.

First, last summer Trump stated that he isn't sure he has ever asked God for forgiveness, as he doesn't "bring God into that picture." He soon backtracked. Asking God for forgiveness is a central aspect of Christianity across the many traditions. This is not relevant to his political views, but it is curious that many Christians support Trump and believe his claims about his Christian faith.

Second, Trump has stated that the United States should take out the families of terrorists: "...you have to take out their families, when you get these terrorists, you have to take out their families. They care about their lives, don't kid yourself. When they say they don't care about their lives, you have to take out their families." This policy would clearly contradict just war theory, which is a prominent Christian view related to declaring and conducting war. One of the tenets of just war theory is that it is immoral to intentionally kill innocent civilians. Given the nature of war, non-combatants will be injured and killed, but according to just war theory this should be avoided if at all possible. It should never be done intentionally. Trump's proposal is not only immoral, it is also illegal and would be ineffective. If we attack innocent women and children, we only provide evidence for the terrorists who claim that they are fighting an immoral enemy.

Third, Trump has proposed that all Muslims should be banned from entering the United States. He's also open to forming a database tracking all Muslims who live here. In addition, he will not rule out requiring some sort of special ID for Muslims. While this taps into the fears and irrational beliefs many hold about Islam, terrorism, and our safety, it is simply wrong to discriminate against people on the basis of their religious faith (or lack thereof). We certainly need to have better screening procedures so that we can identify individuals who may be a threat, given their views and affiliations. But to ban all Muslim immigration because of terrorism that emerges from misguided interpretations of Islam is like banning all Christian immigration because of attacks on abortion clinics or violent racist ideology emerging from incorrect interpretations of Christianity.

Fourth, Trump has a problem with women. His comments about Carly Fiorina's appearance and Megyn Kelly's blood are well-known. His sexism is not new. I was recently reading the classic book On Writing Well, when I came across the following anecdote from a writer who interviewed Trump at a spa he developed in Florida:

"Evidently, Trumps philosophy of wellness is rooted in a belief that prolonged exposure to exceptionally attractive young spa attendants will instill in the male clientele a will to live...Trump introduced me to 'our resident physician, Dr. Ginger Lee Southall'--a recent chiropractic college graduate...I asked Trump where she had done her training. 'I'm not sure,' he said, 'Baywatch Medical School? Does that sound right? I'll tell you the truth. Once I saw Dr. Ginger's photograph, I didn't really need to look at her resume or anyone else's. Are you asking me, 'Did we hire her because she trained at Mount Sinai for fifteen years? The answer is no. And I'll tell you why: because by the time she's spent fifteen years at Mount Sinai, we don't want to look at her'" (p. 221).

The notion that women are equal to men because they are also created in the image of God is an important theological truth, even though many Christians and Christian institutions have not lived up to this. The dignity of women is not grounded in their appearance, but rather their humanity. That Trump has the support of so many women is baffling, to say the least.

Finally, Trump appears to be a narcissist. This might work for reality television or real estate deals, but it is not a desirable trait for the President of the United States. The most important moral principle, according to Jesus in the gospels, is to love God with all of your heart, soul, mind, and strength, and to love your neighbor as yourself. The Christian understanding of love is that it involves sacrifice, self-denial, and preferring the good of others over one's own. It does not appear that Donald Trump understands this.

For these and many other reasons, Christians should oppose the candidacy of Donald Trump.