President Obama's proposal to provide free tuition for community college students has provoked a healthy discussion about an unhealthy situation: the barriers that young Americans face today as they enter adulthood. One barrier is the high cost of a college education, which leaves seven of every 10 graduating students with significant debt as they step out into the world.

There is a better way to address this problem, however. Congress should amend the President's idea to create the civilian equivalent of a GI Bill for young adults who engage in 1-3 years of national service. That single change would turn the President's proposal from a giveaway to an opportunity that serves both the individual and the country. 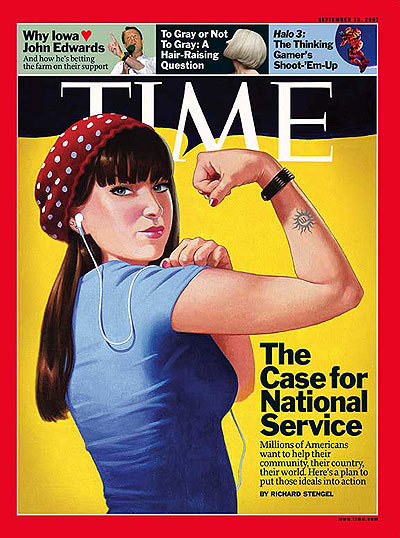 More specifically, the program would offer participants a stipend along with money for room and board while they serve. When their service was complete, the program would provide college or community college tuition for those who want further education, or money toward a first home or a business startup for those who already have finished college or who choose not to attend.

This modification of the President's idea would address several important goals. In 2013, nearly 70 percent of students graduating from public and nonprofit colleges left school with debt, owing an average of more than $28,000. It is not uncommon for student-loan debt to be above $100,000. As of two years ago, more than 1 million people in the United States were in that category according to the Guardian.

The high cost of post-secondary education is only one of several reasons why a national service program makes sense. Young Americans have faced some of the same frustrations and barriers that helped trigger the Arab Spring in 2010. During the Great Recession, youth unemployment reached an all-time high of 19.5 percent, not much better than the 23.4% jobless rate in the Arab region about the time the revolts began there. Young adults here have been called "Generation Jobless" and a "Lost Generation of Workers".

In our post-recession economy, the unemployment for men and women between the ages of 16 and 24 was still 12.3 percent in March, more than twice that of the adult population as a whole. Among adults in the 18-34 age bracket, unemployment stood at 7.8 percent in March, but 14.4% among African American Millennials and 8.8% for Hispanics in that age group.

There have been reoccurring discussions over the years about the value of national service and whether it should be compulsory or optional. In a special issue of TIME magazine in 2007, Richard Stengel came down on the side of compulsory:

The simple but compelling idea that devoting a year or more to national service, whether military or civilian, should become a countrywide rite of passage, the common expectation and widespread experience of virtually every young American.

Why? Most importantly, national service would instill the idea that citizenship means participating in and giving back to the country as well as enjoying its privileges. Our Republic is not a self-maintaining machine. Its health depends on the active and ongoing commitment of the American people to sustain it, if only with the resolve to vote in every election.

Second, national service would give many young adults a greater sense of their interests and career paths before they, or we, invest tens of thousands of dollars in their higher education. A more focused education would yield higher returns for graduates and for the nation.

Third, national service would be an education in its own right. In addition to teaching skills, it would create a greater appreciation for different cultures both at home and abroad. As Mark Twain put it, "Travel is fatal to prejudice, bigotry and narrow-mindedness." In other words, national service would help young adults become not only well-educated but also well-rounded people.

Fourth, the United States can use the help. In the context of climate change and clean energy alone there is enormous work to do. It ranges from helping communities prepare for, respond to and recover from weather disasters, to urban forestry that reduces deaths and illness in more intense heat waves, to helping restore ecosystem services that keep communities better protected against floods and drought, to replanting the millions of acres of forest that have been destroyed by pine bark beetles. Elsewhere in the world, there is energy poverty, a lack of access of drinkable water and to sanitation, a need for education, and a growing number of humanitarian crises caused by war and weather disasters.

Service options would include well-known programs such as the Peace Corps, but also lesser-known programs that serve important needs. Among them are FEMA Corps, a partnership between the Federal Emergency Management Agency (FEMA) and the Corporation for National and Community Service (CNCS) launched in 2012 to help communities with disaster preparedness, response and recovery; and the U.S. Forest Service AmeriCorps Partnership, which engages young adults and military veterans in helping to restore the nation's forests and grasslands. Beyond these established programs, the CNCS could be charged with qualifying other international, national or community service initiatives, including some created by the participants themselves.

The civilian GI Bill would pay tuition and fees for traditional education and training programs, but also for emerging programs that train America's workforce for the transition to a clean energy economy. The U.S. Department of Energy has identified a large number of training programs for renewable energy and energy efficiency jobs. One program, the Solar Instructor Training Network, includes 400 community colleges to provide training in solar energy system design, installation, sales and inspection. The Network's goal is to prepare 75,000 Americans for these professions by 2020.

The White House estimates the President's proposal would require about $45 billion in federal funds over 10 years, with states providing an additional $15 billion -- one more reason Congress should eliminate tax subsidies for the nation's largest fossil energy companies and put the money into more forward-looking initiatives.

Few investments are more important today than preparing young adults to prosper in the rapidly emerging carbon-constrained, clean energy economy and in the bargain, to appreciate that freedom and opportunity come with responsibility.