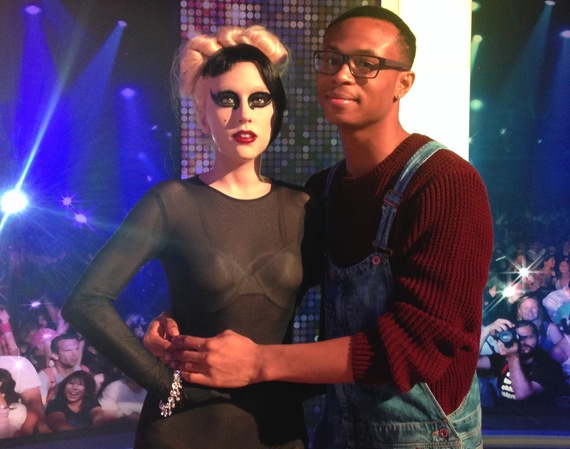 "I'll have a cheeseburger with a cup of blood on the side," said no hemophiliac, ever. Let me start this off by saying I am not writing out of anger or spite. During your recent interview on The Tonight Show Starring Jimmy Fallon when asked about your character on American Horror Story: Hotel, you said, "Mine in particular is a hemophiliac or "vampire," so I need to drink blood in order to survive." I understand that you meant no harm by this comment, but hear me out. I was born with this bleeding disorder and have never seen fangs in my mouth or have drank blood. I've come to understand that the only people that will truly comprehend the extent of hemophilia, are people living with it, so please don't feel singled out.

Hemophilia is a genetic disorder caused by missing or defective clotting protein within the blood. According to the US Centers for Disease Control and Prevention, Hemophilia occurs in approximately 1 in 5,000 live births. Currently, the exact number of people living with hemophilia in the US is not known. However, the CDC estimates there to be about 20,000 males with Hemophilia within the United States based on expected births and deaths since 1994. I have been an active member of the Hemophilia community for 20 years, attending conferences and seminars, and have seen zero pairs of fangs.

When we have any form of physical trauma, we have a risk of profuse internal and or external bleeding. The main medication used to treat the various forms of Hemophilia is a medication we call Factor. This medicine is administered intravenously, through a vein. My fellow hemophiliacs and I practice a routine regimen called prophylaxis, pushing us to take this medicine three times a week. Let me reiterate, we don't have to drink blood, we have to take shots of our clotting Factor, to survive.

Although our medicine is advanced today, the road to clean and reliable medicine was not easy. There was a time in which the demand for our hemophiliac product was so high it overpowered the quality of it. According to the CDC, until 1992, all factor replacement products were made from human plasma. Within B.L. Evatt's, World Federation Of Hemophilia's publication of, " The Tragic History Of Aids In The Hemophilia Population, 1982-1984," it is highlighted that our medicine was once infected with blood-borne diseases, due to unsuccessful screenings of the collected blood. This crisis unconsciously affected many innocent hemophiliacs, who wanted nothing more than to be healthy. I personally have never had a chance to meet my hemophiliac grandfather, who I was named after, because he died as a result of being effected by this crisis.

As I've said before, I'm not writing this out of anger or spite. The way Hemophilia is perpetrated within the media, school textbooks, medical world, etc. is very skewed. Gaga, I will always support you as an artist and overall person. It is understood that you spoke on Hemophilia the best way you could. Hopefully this will give you some insight to Hemophilia, our lack of fangs, and treatment for the disorder. The next time I take my clotting Factor, I'll be sure to throw my paws up.