"A very Gosling Easter to you and yours," tweeted @GoslingEaster Sunday morning.

The twitter account --unlikely run by the heartthrob and New York superhero Ryan Gosling himself-- made waves on social media Sunday, claiming to have laid 200 eggs below 14th Street carrying "Hey Girl"-themed messages inside. The account posted clues as to the eggs' whereabouts, and invited those who found them to tweet a picture of their treasure (below).

"Get over to my house already," read one note. "I'm dipping myself in chocolate for you," read another. The eggs--hidden in trees, ATMS and fire hydrants-- also carried pictures of the popular, meme-friendly star.

There's no word yet on who created the account. Many are crying PR stunt, while others are less cynically hoping "Baby Goose" really just wants lower Manhattan to have a lovely Easter.

Our savior Gosling was in the news last week for saving a journalist from an oncoming taxi, and over the summer when he broke up a fight on St. Mark's Place.

UPDATE: Turns out the Easter Bunny and Ryan Gosling were not responsible for the egg hunt. The mind behind the account is copywriter Jenna Livingston, who told Mashable the thinking behind the project: “I did this project to follow up with another project I did earlier in the year that went viral — Starbucks Spelling,” Livingston says. “I had a blast doing that, and interacting with people, so I figured why not try something else and see if it can go viral, too.”

Check out photos from @GoslingEaster's big day below: 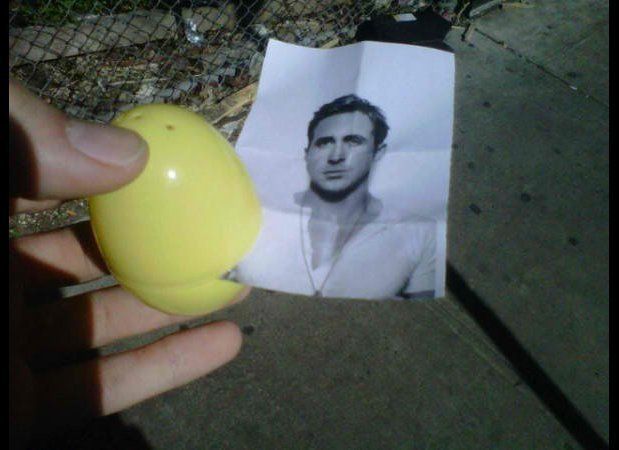