It's a tale of two states.

They sit side by side, each taking in the views of Lake Superior. Their economies both grew from foundations in manufacturing, farming and mining, and they each boast a strong history of organized labor. And in 2010, still reeling from the recession, they elected new governors.

Since his election, Minnesota Governor Mark Dayton turned his state's budget deficit into a projected surplus of nearly $2 billion. Wisconsin Governor Scott Walker has swollen his state's budget deficit to a projected $2 billion. Meanwhile, Dayton has boosted the minimum wage, invested in public education and supported workers' rights. (And Minnesota has the most union members of any state in the Midwest.)

Trickle-down economics doesn't work and frankly, it never has. If we want to restore a healthy middle class, we need a different approach.

And Walker? He has slashed funding to public schools, and is dismantling the state's public university system. On March 9, he signed a bill that makes Wisconsin the 25th so-called right to work state, which, research shows, contrary to the hype, drives down wages and destroys good jobs. Why? All in an effort to eviscerate Wisconsin's labor unions. 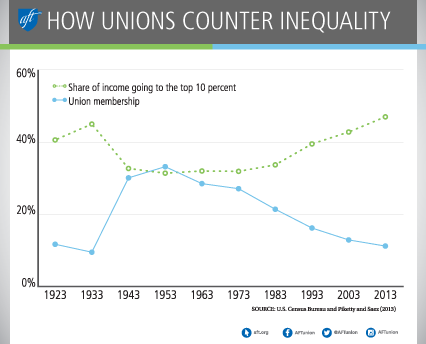 There's a moral to this story. As my high school students taught me, "You've got to walk the walk, not just talk the talk." If you want a strong middle class, then you can't take out the unions that built it. If you want good jobs with higher wages, then workers need a voice.

Trickle-down economics doesn't work, and frankly, it never has. If we want to restore a healthy middle class, we need a different approach, a virtuous cycle that begins with a high-quality public education that gives students the skills they need to get good jobs with fair wages, helping each generation climb the ladder of opportunity. Another crucial step is to enable more workers to form and join unions.

As Hillary Clinton recently noted, "The American middle class was built, in part, by the right for people to organize and bargain." She's right. When unions were at their peak, more workers -- upwards of 50 percent -- were in the middle class. Conversely, a decline in union membership - spurred on by trickle-down economics, ideological attacks and globalization -- is directly linked to the rise in income inequality.

At a time when only the wealthiest 10 percent have reaped the benefits of any gains in productivity, workers once again need a voice on the job. Collective bargaining can lift all boats, even those boats that aren't carrying a union card.

Look at wages. In the heyday of the American labor movement, non-managerial workers' wages went up 75 percent. As unions have been on the decline, these workers have only seen a four percent bump. Still, even today, union workers earn 28 percent more than nonunion workers. When two-thirds of our economic activity is driven by consumer spending, it's critical that working families have more money in their pockets to spend. Broadly shared prosperity will remain elusive as long as workers' buying power is limited.

And then there is retirement security. Eighty-six percent of Americans believe our nation faces a retirement security crisis. Unions bargain a secure retirement on behalf of workers, often in the form of pensions. Pensions both ensure that workers can retire with financial dignity and are important investors in our economy. For every dollar paid in pension benefits, there's $2.37 in economic output. Plus, long-term capital funds create hundreds of thousands of jobs in asset classes like infrastructure, venture capital and real estate. 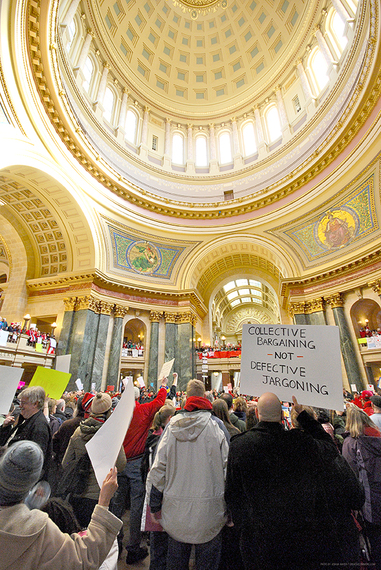 Workers in so-called right-to-work states make about $1,500 less per year. When wages are lower, workers leave the state, depressing job creation, and there's a sizable economic loss to the state. Marquette University economist Abdur Chowdhury estimates the impact of right-to-work on Wisconsin will be "a net loss of direct and indirect income of at least $5.8 billion annually."

Governors and state policymakers have a clear choice. They can push ideological policies to break the backs of unions and further disempower workers, have their deficit grow, workers' wages sink and their state ranked at the bottom for business and economic climate, as Walker's Wisconsin is. Or they can -- like Minnesota, which is ranked in the top ten in the nation for its business and economic climate -- strengthen unions and workers' rights, invest in public education and infrastructure, and create more good jobs.

It's a clear choice, and if we care about working families accessing the American dream -- it's not a hard one.