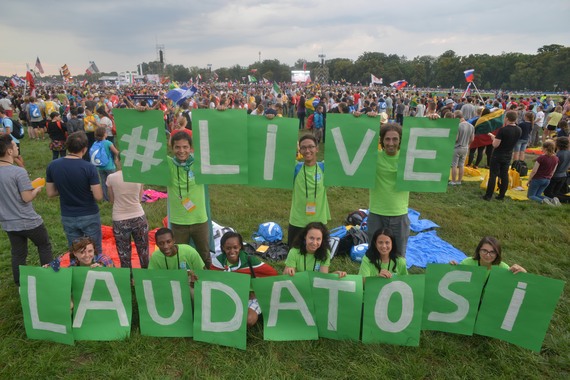 What a week it was. Catholic World Youth Day - actually a six-day festival taking place from 26th to 31st July and featuring concerts, workshops and huge masses presided over by Pope Francis himself in Krakow, Poland - has been and gone, and myself and three million other young pilgrims are wending our way home.

It was hard not to leave this particular World Youth Day without mixed feelings. On one hand, it was a fantastic celebration, bringing young people together from all nations in what is itself a powerful symbol of cross-cultural unity. New friendships have been made, bridges have been built, and millions have left Poland proud to be Catholic and with a sense of renewed faith.

At the same time, however, the mood during that week was in many ways extremely somber. Events like the murder of a priest in France and Pope Francis's visit to the site of the former concentration camp at Auschwitz remind us that our world is and always has been a deeply troubled place.

Our planet is also confronted with a severe ecological crisis, which was equally apparent in the last month as floods ravaged China, wildfires spread through California and droughts hit Honduras. Pope Francis wrote in his Encyclical Laudato Si' in June 2015 that our Earth 'cries out to us because of the harm we have inflicted on her by our irresponsible use and abuse of the goods with which God has endowed her' (2). From air pollution to more frequent and more intense extreme weather events, our obsession with endless consumption and our addiction to the fossil fuels that contribute to climate change, is taking its toll on the things we love most. 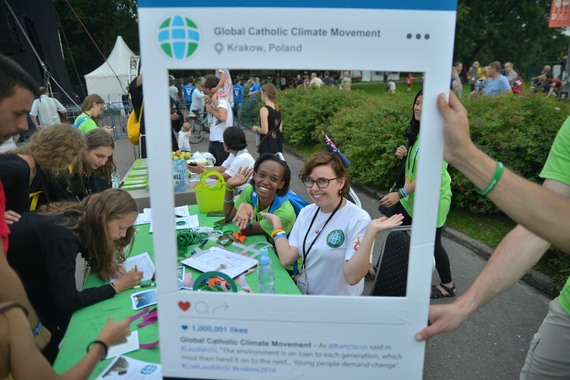 The Laudato Si' Eco-Village provided young Catholics in Krakow with a space to talk about the Pope's Encyclical. Photo credits: Bogusz Bilewski.

All of these problems are interconnected - that is the real message of Laudato Si', and it is one that the Pope drew attention to again at World Youth Day in speeches, by travelling to events by eco-tram, and in his video shown on the big screens before the final mass calling on young Catholics to pray for creation. Our attitudes to economics and our consumption patterns cannot be separated from climate change and from the forced migration of the poorest and increased risk of conflict that it causes. Furthermore, the impacts of our abuse of the planet affect everyone, regardless of the fact that some countries and lifestyles contribute more to these impacts than others and that the poorest are hit disproportionately hard.

The Pope also made it clear at World Youth Day that this is not just an academic problem that we can solve from our sofas - he called on young people to get out into the world, engage in social activism and politics, and make a difference. It is my hope that young Catholics will respond to the Pope's call to care for creation by taking action together with other Christians throughout September, during the special time of the Season of Creation.