FORT WORTH, Texas (RNS) What people here are wondering today is what in the world went wrong with Aaron Alexis?

The man who shot and killed 12 people had his problems. But friends who worked and lived beside Alexis say they don’t recognize the man who went on a shooting rampage Monday at a military complex in Washington, D.C., and eventually was shot dead in a gunfight.

Alexis’ life ended in Washington, where he lived in a Residence Inn in the southwest part of the city and worked as civilian contractor for the military. But much of his story is centered in Fort Worth, where he seemed to be an easygoing guy who practiced Buddhism, meditated for hours and hung out with friends who spoke Thai, as he did.

“He was a good guy to me,” said Nutpisit Suthamtewakul, who met Alexis three years ago at Wat Busayadhammavanaram, a Fort Worth Buddhist temple. The two became good friends.

By some accounts, Alexis led a somewhat reverent life during his early years in Fort Worth, working at the nearby Naval Air Station, meditating and studying Thai. Somsak Srisan, 57, a friend and landlord, met Alexis at the temple and became endeared to him. Alexis told Srisan he hoped to become a Buddhist monk someday. “Keep studying,” Srisan told him.

When Alexis needed a place to live, Srisan rented him the two-bedroom brick home he owned in a wooded lot behind the temple. Alexis lived there for about eight months, from 2010 to 2011. He paid the $600 monthly rent on time each month and adhered to Srisan’s strict rules of no drinking, no smoking, no partying, he said. Alexis also attended temple two to three times a week, meditating with other congregants for an hour at a time, Srisan said. Sometimes, he would flirt with the female congregants, he said.

But in early 2011, Alexis lost his job at the naval station. Unable to make rent, he moved out of the house behind the temple and came to meditation groups less frequently, Srisan said. Srisan told Alexis he was sorry to see him leave the job, which offered good benefits and a steady paycheck.

“He said he didn’t like the system,” Srisan said. “He said, ‘I don’t need to get too involved with that.’ ”

Alexis moved in with Suthamtewakul, who owns the Happy Bowl restaurant. Late-night drinking sessions ensued as the pair would go through one six-pack of Heineken after another, Suthamtewakul said.

They lived in White Settlement, a Fort Worth suburb about 11 miles west of downtown. Known as one of Texas’ most authentic cowboy cities, Fort Worth boasts historic stockyards, where cattle are still run down city streets twice daily. Dallas, Fort Worth’s larger sister city, lies about 30 miles east with more people, a bigger skyline — and more nightlife.

Sometimes after work, Suthamtewakul and Alexis would drive to Dallas for private parties at friends’ Thai restaurants.

“He wanted to speak Thai,” Suthamtewakul said. “He was very focused on practicing the Thai language.”

But Alexis left the Navy because he didn’t like waking up early, Suthamtewakul said. The classes stopped, as well.

As Suthamtewakul moved four times over the next three years, Alexis moved with him, struggling to keep a job.

Alexis didn’t contribute to the rent but would come to Suthamtewakul’s restaurant and help with deliveries for free, including to some of Fort Worth’s roughest neighborhoods, Suthamtewakul said. Often, Alexis would have his .45-caliber pistol tucked in his belt.

Suthamtewakul had to advise him to hide the weapon sticking out of his belt so customers wouldn’t see it. Alexis would talk often about the need to protect himself and how to use guns. He occasionally practiced firing the weapon at a local firing range, Suthamtewakul said.

From the first days they met, Alexis would talk about people coming to get him.

“He always thought someone was trying to hurt him,” he said. “He was afraid of people.”

Alexis briefly had an Asian girlfriend in the Navy who stayed with them for a week about two years ago. He was, by all accounts, happy, Suthamtewakul said.

Suthamtewakul trusted and liked Alexis enough to ask him to be his best man at his wedding in December. In July, with Suthamtewakul’s new wife now living with the pair, Alexis moved out.

Kevin McDonald, owner of Kevin’s Hometown Furniture, next to the Happy Bowl restaurant, said he would often chat with Alexis outside the Happy Bowl. Alexis would be taking a cigarette break and McDonald would chastise him, telling him he should quit.

McDonald knew Alexis had been in the Navy Reserve and the two would talk politics and current events, ranging from the attack on the U.S. Embassy in Benghazi to the latest news out of the White House, he said. Alexis didn’t have heated opinions on any of the topics.

“Nothing out of the ordinary,” McDonald said. “I probably made more negative comments on President Obama than he did.”

Michael Ritrovato, 50, said he and Alexis became friends about four years ago at a Buddhism festival in nearby Keller, Texas. He would see him often at the Happy Bowl. Fellow New Yorkers, Ritrovato and Alexis talked about jobs and girls and got together at Ritrovato’s house to watch the New York Giants play in the Super Bowl.

“He loved to have fun,” Ritrovato said. “We would have a few beers together.”

But last year, Alexis’ fun-loving attitude soured, he said. After landing a job with a computer company that took him to Japan, Alexis called Ritrovato to complain that the company hadn’t paid him in weeks. Earlier this year, Alexis called again to say his car had broken down and he didn’t have enough money to fix it, Ritrovato said.

Ritrovato said he tried to get him a government job several times, but Alexis would foul up the application process. Four months ago, Alexis called again with more car and money problems.

Kasem Pundisto, head monk at the Wat Busayadhammavanaram temple, said he noticed a change in Alexis.

He was sociable and talked in Thai regularly with the other monks. But he also brooded at times.

Alexis was in good spirits when he lived in the house behind the temple and meditated regularly, Pundisto said. But his mood seemed to change after he moved out. He attended meditation less regularly.

About six months ago, Alexis asked Pundisto for a ride to the auto mechanic to pick up his car. On the drive over, Alexis confessed that he was not happy with his life and that he yearned to return to the monks.

“It looked like he had something heavy on his mind, like he was trying to keep it all in his head,” Pundisto said through a translator. “I told him, ‘Relax, come back to meditation.’ ” 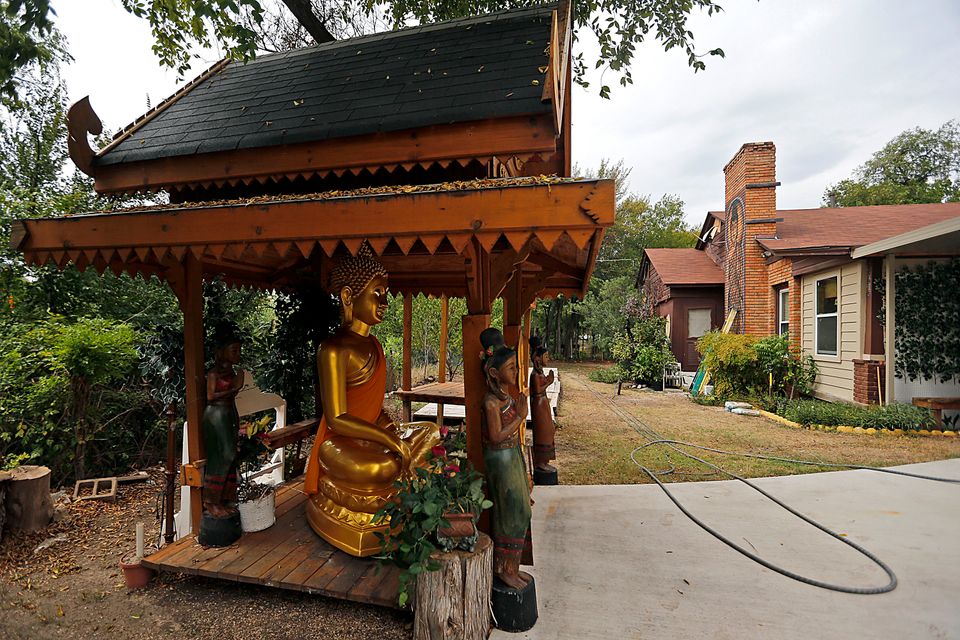