The Supreme Court doesn't seem to care about much besides the very richest when it comes to campaign finance law. In the 2010 decision Citizens United vs. FEC, the court ruled that no amount of money can corrupt a politician, hence there shouldn't be any limits to spending in elections, because having spending limits is basically just like muzzling some poor corporation's political speech with an unconstitutional ball gag. There have been concerns over a conflict of interest in the Citizens Untied decision, after revelations that Chief Justice John Roberts had in fact been discovered as an infant and raised in the woods by a pack of corporations.

To some, going through the process of passing a new amendment is too daunting to find it viable. But given the widespread support for overturning Citizens United, this is necessary to stop the Supreme Court from continuing to eviscerate common sense anti-corruption laws. In the recent decisions Hobby Lobby vs. Sebelius and McCutcheon vs. FEC, the Supreme Court doubled down on the dubious precedent of Citizens United: that corporations have constitutional rights just like people, and that letting a rich person spend as much as they want in elections was what the founders intended when they wrote the First Amendment.

It might seem radical to have a Constitutional Convention over something like Super PACs, the unenforceable slush funds that have flourished as the latest billionaire accessory. But you know what is even crazier? Passing a Constitutional Amendment BANNING ALCOHOL. Can you imagine a tougher sell than banning cocktails? Doesn't leveling the playing field in elections seem pretty reasonable now?

In this edition of Activist Comics, the need for an amendment is visualized through adapting a Superman comic book cover where the Man of Steel is being made into a monkey by a mutant gorilla. 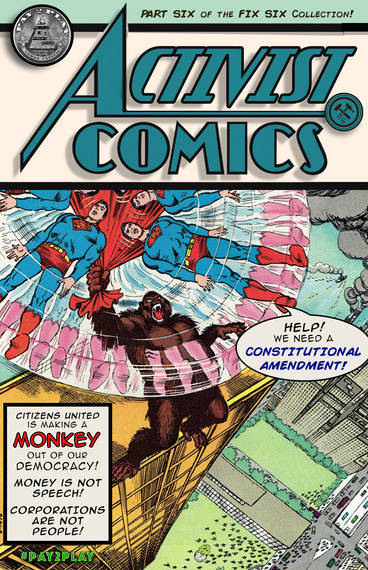 What would this amendment look like? There have already been different versions introduced to Congress, and even the Senate debate about an amendment to overturn Citizens United fell short of including the tenets that Money≠Speech and Corporations≠People.

Below is what that amendment could read like, as proposed by Move to Amend, which was introduced into Congress with love on Valentine's Day, 2013. And to make it feel as important as possible, here is the amendment presented as the opening scrawl from Star Wars.

A new CONSTITUTIONAL AMENDMENT is one of the Fix Six solutions featured in PAY 2 PLAY: Democracy's High Stakes, a new documentary about standing up to money in politics. Out 12/2 on DVD, available now in iTunes, Amazon, Vimeo, and Disinfo.