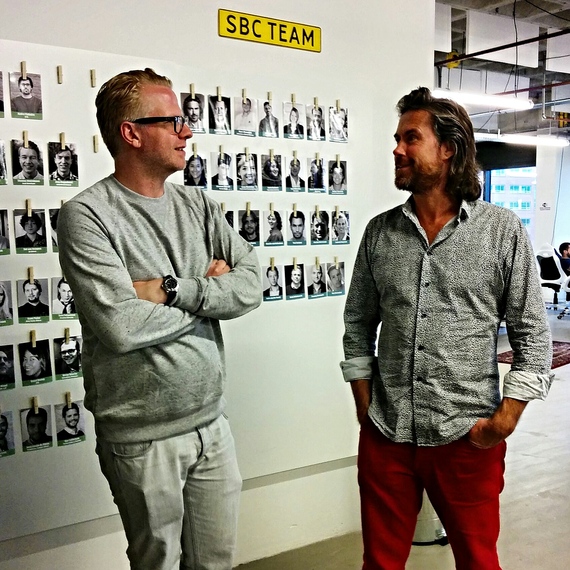 In April, I before I met with Deputy Mayor Kajsa Ollongren during The Next Web conference in the Netherlands, I was introduced to Patrick de Zeeuw, CEO of Startupbootcamp Amsterdam and Co Founder of Startupbootcamp Global. At the time this article was being written, de Zeeuw has worked with 281 startups boasting a 73% funding rate, raising an average of 600,839 euros each.

Founded in 2010 in Copenhagen, Startupbootcamp has ten programs in eight cities, as well as an alumni and mentor network from 30+ countries across the globe. Programs are currently active in Amsterdam, Berlin, London, Barcelona, Copenhagen, Eindhoven, Sittard, Singapore and Istanbul, with other cities and vertical programs to be announced soon. In 2014, Startupbootcamp was awarded the 'Best Accelerator' title by popular industry vote at Europe's premier startup event, The Europas.

After our meeting in Europe, I conducted a email interview with de Zeeuw to understand his approach in helping startups succeed.

What do you look for when you invest in a company?

First of all, I look at the team. Does it have a strong leader/talented entrepreneur; do the co-founders have complementary skills, backgrounds; have they worked together before and overcome difficulties? All of our founders undergo a Facet5 psychological test that we analyze with a professional psychologist, which we then discuss with the founders. Next, we conduct pre-mediation sessions aimed to discuss and solve issues before they become serious problems. I've had pre-mediation with all of my co-founders and it works. Tensions can rise during every stage a startup goes through: start, growth and exit. Often the founders need guidance during these stages to avoid major founders issues or team explosions. Don't forget: About 50% of startups fail because of team issues. If you can avoid those issues the success rates increase.

Second, I look at the concept/product. Is the timing right; is the market saturated already? Timing is one of the most crucial things launching a startup. I've experienced this myself many times -- Companies I've launched too soon or too late eventually failed. Companies that I launched at the right moment, just when the wave started, became successful. If timing is right you can grow on a rising wave. You just need to stay up and stay on top.

What do you look for when you invest in a company?

Then I look at the team again. Can they build a great product and a great company that can scale fast and furious? Can they attract the right talent that fits to the company culture? Is the leader inspiring; can he/she sell the vision to investors, clients, employees, etc.?

Eventually it's about two main things:

At Startupbootcamp, we have invested in almost 300 startups since we launched in 2010. With about 100 of them, I've intensively worked with and still work with. The companies that are doing very well have great teams with very strong leaders that guide the startup through the storms they all encounter. They find solutions for each challenge and solve problems. These companies also managed to launch at the right moment.

To give a few examples of startups that fit this profile, I mention:

What are the top three pieces of advice you give to companies in Startupbootcamp?

1. Validate your assumptions and make fact-based decisions.
2. Appoint a professional pre-mediator from the birth of your startup.
3. Raising funding is not a goal by itself, neither is it a form or recipe for success. Investors want influence in exchange for the capital they invest. Make sure you date a lot before taking an investor onboard; it's sort of a marriage which can be fun but also painful. Investors can make or break a company. Make sure you pick an investor that stands by you when times get rough and tough.

Which three mistakes do you commonly see, and how should they be resolved?

1. Too little focus on making revenue.
2. Poor/no communication -- Between founders, founders and investors, founders and clients/users.
3. No caretaker onboard; someone who looks after operations, culture, oiling the machine.

Issue 1 is plain and simple: Cash is king at a startup and revenues bring cash. If you have revenue and make profit, all other things get less complicated: fundraising for growth, hiring talent, expanding internationally etc. I talk about this a lot with our alumni. Once they start making revenue, they experience what I've told them. They have to experience it themselves to really get it.

Issue 2 and 3 can be resolved by bringing onboard a talented woman that is either a co-founder or joins the founding team. I truly believe women are better caretakers, organizers and are more sensitive to things that really matter in building a startup into a growing company. I've experienced this my whole life and still see it happening every day.

How does a company in a saturated market succeed?

Team. Look at Google -- They came into the market when there was quite a lot of competition in search engines (Yahoo, Alta Vista, etc.) and email (Yahoo). The Google team created superior products and the users switched.

Look at what Elon Musk is doing with Tesla. Cars have been around since the T Ford was launched. Automobiles is a saturated market, but Musk brought innovation to the industry and built the best car to date. People love it and buy it.

What do you look for in advisory board members?

How important are mentors?

They can be very important if they bring the four things that I mentioned above. But there has to be dedication and a good match of personalities with the founders. I think each founder should have a mentor. The CEO should have a fellow CEO (can be of a startup as well) as a mentor, which s/he can relate to. Same for CTO, CFO, CMO.

What makes your program so successful?

Its run by entrepreneurs who've all gone though the phases of starting up several companies themselves, grown them, raised funding, IPO'd, and encountered bankruptcies or company close downs. These experiences are the basis of our programs. It's hard to advise startups or more mature companies and be credible as a founder of an accelerator if you have not gone through all these experiences yourself.

How do you define innovation?

Make the impossible happen and go against the (main) stream

Can innovation be taught?

I think innovation comes from entrepreneurs or from people with entrepreneurial drives. Can this be taught? Not sure. When I was a kid, I was always inspired by entrepreneurs and pro sport players -- They both are a bit crazy since they mostly set very high goals for themselves. I started as an entrepreneur when I was 15, learned a lot and then had the opportunity to work with the three most inspiring and entrepreneurial people in the media industry for six years. Did I learn from them; for sure -- One of the things was to think really big. Did I already have entrepreneurial drive? Yes.

So I think you need drive, energy, guts and inspiration more than skills to become be an entrepreneur. Skills can be learned, the others not.

Have you ever seen an overnight success?

Not really, depends on definition of success. To be honest, almost all startups go through ups and downs, pivots, etc. before having serious success and traction. You need to be very persistent and have tremendous drive to create success and most importantly sustain it -- Which is more difficult than creating success.