One of China's most visible and outspoken contemporary artists, Ai Weiwei has had a fraught relationship with Chinese authorities, who placed him under house arrest last fall and demolished his studio. Last month, a Chinese online poll for "artist of the year" was scrapped by Sina.com when it became apparent that Ai was going to win by a landslide. Yet his international reputation has only grown stronger, especially after his extraordinary -- if dusty -- porcelain sunflower seeds filled the Tate Modern's Turbine Hall last fall. 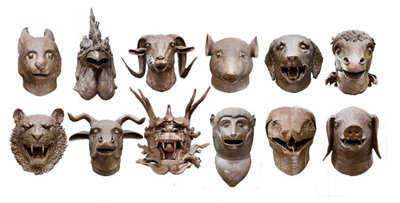 The menagerie of beasts in Ai Weiwei's "Circle of Animals/Zodiac Heads" / Courtesy the City of New York, AW Asia

Now, Ai Weiwei is sending his first major public art installation to the United States. The monumental piece, "Circle of Animals/Zodiac Heads," will begin its travels in Central Park's Grand Army Plaza, in front of the Plaza Hotel, from May 2-July 15.

"Circle of Animals/Zodiac Heads" is inspired by a fountain-clock designed by two European Jesuits at the behest of emperor Qianlong in the 18th century. Located at the Old Summer Palace just outside Beijing, the piece featured the animals of the Chinese zodiac, each spouting water at two-hour intervals. In 1860, the Summer Palace was ransacked by French and British troops during the Second Opium War, and the animal heads were looted. Today, seven heads -- the rat, rabbit, ox, tiger, horse, monkey, and boar -- have been located, but the other five remain missing. (When the rat and the rabbit were offered at the sale of Yves Saint-Laurent's collection at Christie's in February 2009, Cai Mingchao, an adviser to China's National Treasures Fund, purchased them for $19 million but refused to pay.) 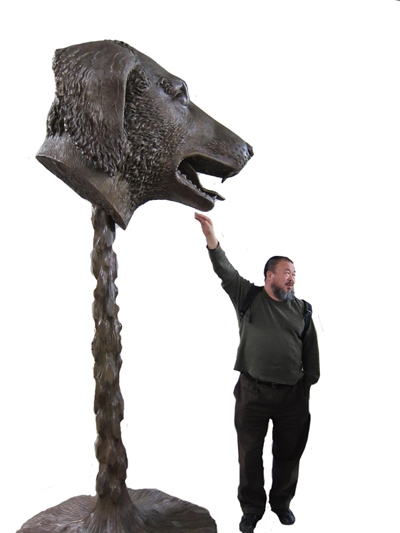 Artist Ai Weiwei with one of the sculptures
/ Courtesy the City of New York, AW Asia

Ai Weiwei has reinterpreted the zodiac animals on an oversized scale. The 12 heads are cast bronze and positioned on bronze bases. Each head weighs approximately 800 pounds and measures approximately four feet high and three feet wide. The head and base together measure ten feet high. "My work is always dealing with real or fake, authenticity and value and how value relates to current political and social understandings and misunderstandings," the artist said in a statement. "However, because "Circle of Animals/Zodiac Heads is composed of animal heads, it's a work that everyone can understand, including children and people who are not in the art world."

The work is presented by the Chinese contemporary art organization AW Asia in cooperation with the City of New York. New York mayor Michael Bloomberg said in a statement that he is "proud that New York is host to this monumental work by Ai Weiwei before it travels the rest of the globe." Larry Warsh, AW Asia founder, remarked in a statement that "the artist has a great fondness for New York, having lived here in the 1980s, so Grand Army Plaza by Central Park is a fitting place from which to launch this world tour."