Is Alec Baldwin a good sport? At a pre-screening cocktail party at Mary Jane and Charles Brock's East Hampton residence, a property complete with croquet and golf courses, Alec Baldwin M.C.'d a competition, kids against adults putting on the green to benefit the Hamptons International Film Festival. Of course one of the kids was Sky Sudberry, a 9-year old from Texas, second place at the World Championship of Junior Golf at Pinehurst, N.C. with poise to kill and a killer grip. As she was planning her swing, Baldwin was hacking a pretend cough. Sky just took it in stride besting him in this lawn competition. She is, after all, one of 8 kid sport stars in a new movie, The Short Game, directed by Josh Greenbaum, to open on September 20. To put it mildly, the documentary is killer cute, and funny, and as Alec Baldwin put it at the Q&A following the Guild Hall screening, he learned a lot. 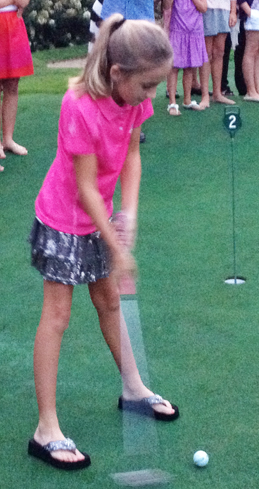 With wife Hilaria on hand, ecstatic with their new baby Carmen and showing shots on her I-phone, Baldwin had lots of questions for Sky Sudberry: My daughter is one week old, should I enroll her now to prepare her for golf? Sky--you could see she was sensible, unfazed by this celebrity's patter--indicated he could wait. But there was one close-to-the-bone life lesson that he should act on immediately. In the film, another kid golfer Allan Kournikova, the younger brother of tennis star Anna, does not hide his glee when another player plays badly. His coach has to tell him to stifle his Shadenfreude. Baldwin asked Sudberry if she too was happy when an opponent misplayed. I just think, I have an open door, she replied, tactful. And do you show that? No, I say it in my head. Ah, best to say things in your head, repeated Baldwin. I can learn from that. Do you, by any chance, read The New York Post?