While I was in Ireland teaching a criminal justice course this past semester, I had the opportunity to take a tour of an Irish prison.

The Irish prison service states one of its key missions is to protect human rights: the rights of the public and the rights of the offender. A tour of a temperature-controlled prison in the Irish city of Cork revealed prisoners had access to Wi-Fi, educational programs, drug treatment and counseling. Clients interact with staff on a first-name basis. Prison food is high-quality and health care is equivalent to what is available to the general public. As you may know, none of this is true in American prison systems.

As a criminology professor and U.S. prison system researcher, I get a front-row seat to the atrocious conditions that American prisoners live in day in and day out -- overcrowding, violence, rape, a funding deficit and a disappointing health care system, among other problems.

Early Calvinists were known for their intolerance of others' perspectives.

In the Irish prison, workout rooms, in-cell TVs and quality food were all present. As the prison staff discussed their jobs, they noted that all of their prisoners eventually return to society and that the staff's job is to keep them from returning to prison after their release.

Having studied prisons in the U.S., I've found it is clear we do not share that ideology. America views prison not only as the punishment, but also as the place for punishment, deliberately making prison more difficult in hopes of reducing recidivism. However, when comparing Ireland, which had a recidivism rate of about 62 percent in 2007, and the U.S., which had a recidivism rate of 67 percent in 2005, you quickly see that our "get tough" strategies haven't made return rates any lower. 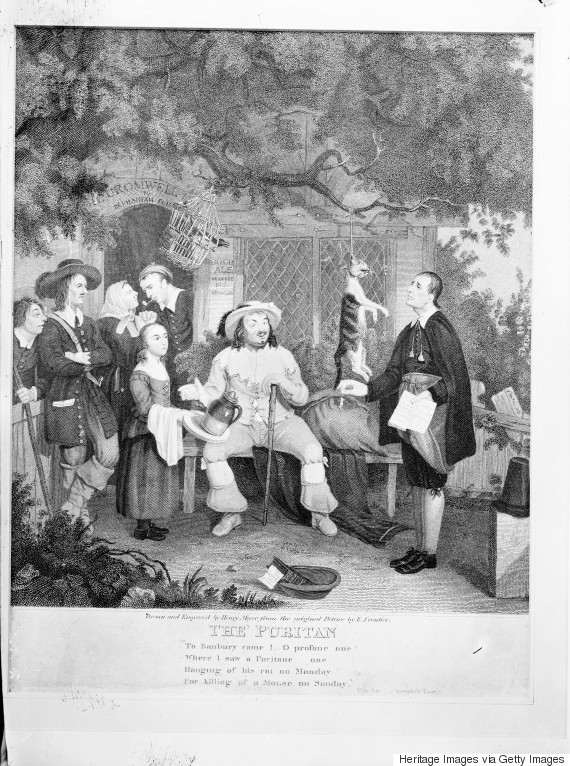 'The Puritan', (c1810-c1847) is shown hanging his cat for killing a mouse on a Sunday. (Photo by English Heritage/Heritage Images/Getty)

Could this difference in the idea of punishment be related to some foundational ideology rooted in the religious history of these countries?

I started to reflect upon German sociologist Max Weber's book "A Protestant Ethic and a Spirit of Capitalism" during my time in Ireland. Weber suggests that a major branch of Protestantism called Calvinistic Christianity laid the foundation for modern industrial capitalism by proposing beliefs and values that would lead adherents to adopt a "spirit of capitalism."

Calvinistic Christianity is the belief that Calvinists took on as a reaction to the Lutheran movement and the Roman Catholic Church, with a theology that proposed a strict adherence to the Bible and right living. While other sects of Christianity preach right living, early Calvinists were known for their intolerance of others' perspectives. In addition, they dropped the more sacramental notions of sin and forgiveness found in Anglicanism, Catholicism and Lutheranism and adopted a personal relationship of understanding between the penitent and God.

In Protestant sects, such as Calvinist Christians, the sinner has no assurance of divine forgiveness or acceptance.

With Weber's theory in mind, I began to consider the role of religion in the creation of the modern American criminal justice system. Of all the common law nations, only the U.S. had its origins rooted in a form of religious fundamentalism, known as Puritanism. Puritans believed that strict adherence to sacred scripture was the only real faith. A pure faith was a biblical faith, and that was generally rigid and unwavering in its adherence to their interpretation of scripture. Although the U.S. was and is a country without a dominant religion, many colonists incorporated beliefs rooted in Calvinistic Christianity into the new nation and its laws.

Even though Pew Research Center data from 2014 shows about 70 percent of the U.S. population practices Christianity, down from about 78 percent in 2007, the religion -- Calvinist Christianity in particular -- remains a cultural power in the country. Foundational ideologies of right and wrong and punishment and redemption remain rooted in this religious tradition. These concepts are at the forefront of our country's attempt to deal with criminals. While it is certainly true that religion is weakening in the United Kingdom, with 46 percent of citizens identifying as Christian in 2012 from about 59 percent in 2011, the U.K. and all other common law countries do not house their cultural roots in Calvinist Christianity.

The Church of England, like the Roman Catholic Church, recognizes the role of private and public confession for the forgiveness of sins. In these institutions, the penitent acknowledges his or her sin to a priest and is absolved, or washed clean, by the act of the church. Once the sinner is forgiven, they are assured that he or she is "right with God," will never again need to confess that sin and are free to go on with life, assured of salvation. 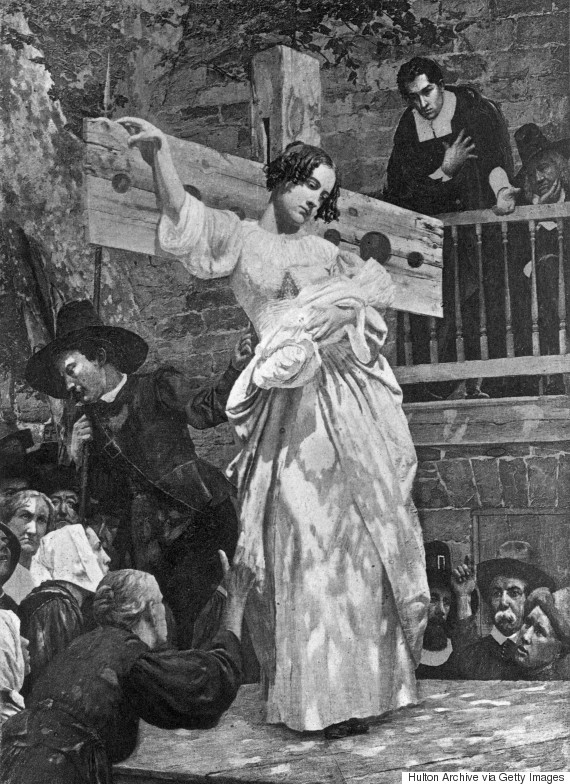 In the 1850 American novel "The Scarlet Letter," Hester Prynne is condemned by a Puritan New England court for adultery. Her punishment is to stand, holding her out-of-wedlock daughter, upon the scaffold in the town square for three hours and to wear a scarlet A embroidered upon her clothes for the rest of her life. (Hulton Archive/Getty)

In Protestant sects, such as Calvinist Christians, Weber points out that the sinner has no such assurance of divine forgiveness or acceptance. In fact, Protestants who join a non-sacramental sect must trust that their confessions of guilt were heard by God, accepted as valid and actually absolved. They are told that their confession to God is "heard" but no human being is touching them, absolving them or telling them that a sacramental change has occurred. The forgiveness for most Protestants happens not in the public arena of a church, but in the private recesses of the mind. This personal confession, according to Weber, creates a level of insecurity about whether or not one has actually received God's forgiveness, which then forms a collective anxiety for Protestants who are not in sects that believe in a sacramental type of forgiveness.

Calvinists dealt with this anxiety by strict adherence to rules for "right living." For example, Puritan punishment in Nathaniel Hawthorne's "The Scarlet Letter" is to force a woman caught in adultery to wear a red letter "A" around her neck. Violations of the rules were dealt with authoritatively. Since Calvinist sects and their deviants dominated the American religious ideology for hundreds of years, this could be one reason for the differences in punishment ideologies that trickled into criminal justice systems.

What emerges in the U.S. is a penal system grounded in a Protestant fundamentalist religious history, with a strong sense of right and wrong and a penchant for justifying abuse.

This was produced by Zocalo Public Square.