This Saturday an organization called AmericaSpeaks is sponsoring a "National Town Meeting" on the budget deficit in twenty cities. Although organizers claim to be non-partisan, a review of their materials reveals an ideological bias in some key sections -- a bias that's likely to manipulate attendees into "spontaneously" deciding that the social safety net must be cut (with some limited tax increases possibly thrown in for camouflage.)

AmericaSpeaks (the odd formatting is theirs) is part of a well-coordinated media campaign. It's no coincidence that the self-described centrist group Third Way sponsored an event this week in Washington, just before this "town meeting," which also emphasized "defeating the deficit." That event was called "Back in Black," which happens to be the name of a song by rock group AC/DC. Given what's likely to happen if we slash spending even more in this troubled economy, they might have done better to name it after another one of the band's favorites: "Highway to Hell."

The "town meeting" is being touted as a politically-neutral chance for people to be heard but, while their materials are genuinely objective in some places, the presentation is manipulative in others. "America" may "speak" on Saturday, but organizers seem to be writing its script, encouraging participants to make the right statements for media consumption. The objective may be to promote the idea that "ordinary Americans" are more worried about the deficit than they are about jobs, health coverage, or financial security. Consider this table: 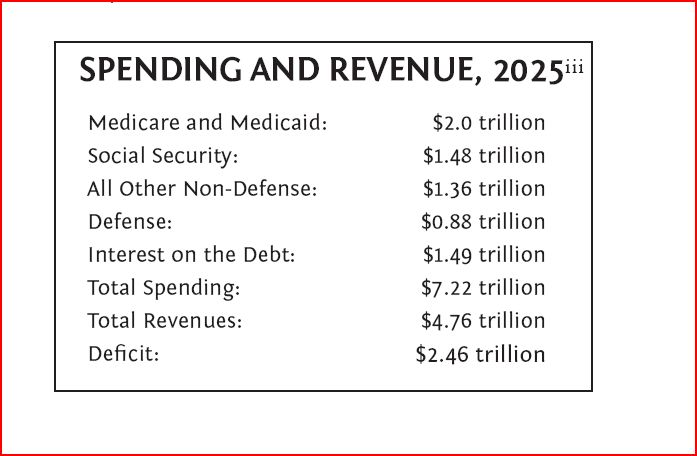 That Social Security figure looks shocking. But the table doesn't tell you that Social Security is a separate program, an independently-financed social insurance fund that can pay all of its planned benefits until 2037 or 2042 (depending on which assumptions are used), after which it can pay 75% of those benefits. For attendees who don't have that information - that is, most of them - it will look as if this self-funded and independent program is eating the Federal budget alive. 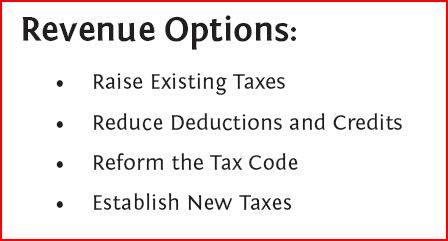 Several, undoubtedly more popular options are missing from this list, like "restore taxation to pre-George W. Bush levels" or "increase taxes on the extremely wealthy." (You don't see an option for "taxing banks and hedge fund managers to pay for their bailouts" in there, either.)

The workbook's section on "Changing the Health Care System" stacks the deck pretty heavily, too. It lists only three options: First comes something called "Premium Support," which paraphrases a radical privatization approach pushed by the Cato Institute. Then there's "Single Payer" (not the more popular phrase "Medicare For All"), which is given a three-sentence summary whose third sentence reads as follows: "Federal policymakers would make the major decisions about the health care services that Americas (sic) would receive and how these services are distributed among people of different ages, incomes, and so on."

The workbook repeats stale, misleading talking points from the health reform debate. It doesn't explain that "Single Payer"/Medicare For All would be no more intrusive on medical decisions than today's extremely popular Medicare plans, or that it would eliminate profit-driven corporate decision-making from the health process.

Their third medical choice was "More Regulation Under the Current System." It reads in part, "Policymakers would regulate this system much more, with government boards providing stricter rules on the service (providers) must deliver ..." Instead of presenting this mythical proposal, which no one has actually proposed, they could have described the real proposal from which this Frankenstein variation has been invented. It's called "evidence-based medicine," and it would involve discovering which treatments are most effective and encouraging their use. While there's a genuine debate to be held about evidence-based medicine, it shouldn't involve scare tactics.

Needless to say, there's no mention of other popular cost-saving proposals, like the public option plan that would put the government and private insurance in competition. Polls show the public option was supported by 71% of Americans and more than half of all Republicans.

In other words, the workbook's designed to manipulate attendees into rejecting "nutty proposals from the left and right" so they can be guided into conversations about cutting Social Security and raising premiums or out-of-pocket costs in Medicare and Medicaid.

Why? Why would anyone encourage the public to support slashing needed programs while so many people are hurting? Paul Krugman keeps dispelling many of the Social Security myths the organizers continue to repeat. He did it again a couple of days ago in discussing the President's Deficit Commission, which is one intended audience for Saturday's event. The AmericaSpeaks agenda flies in the face of recommendations from Krugman, fellow Nobel winner Joseph Stiglitz, and other economists who believe we need to stimulate the economy before moving aggressively on the deficit.

As Dean Baker explains, some of this posturing is probably intended to impress the bond markets. These bond markets include the speculators that recently crashed the economy and were bailed out with trillions of taxpayer dollars - trillions of dollars that AmericaSpeaks probably won't mention on Saturday.

Who benefits from this campaign? Anybody who makes a lot of money and doesn't want to pay taxes will benefit from slashing government programs. Corporations who can cut pensions even further once working Americans stop expecting financial security in their old age. And Washington insiders who, insulated from the public's pain, want to demonstrate their "courage" and "toughness" by demanding sacrifices from the least among us.

MoveOn is encouraging its members to attend the Town Meetings, in the cities listed here, either as enrollees or to participate in rallies held outside. In an email blast to its subscribers, MoveOn said that "we need a strong showing to preserve the promise of Social Security for generations to come" and suggested its members register. They're right. Saturday's event has been designed to lead well-meaning people toward some cynical conclusions, and other points of view will be needed to bring a more honest perspective to the proceedings.
_______________________

Richard (RJ) Eskow, a consultant and writer (and former insurance/finance executive), is a Senior Fellow with the Campaign for America's Future. Richard also blogs at A Night Light.