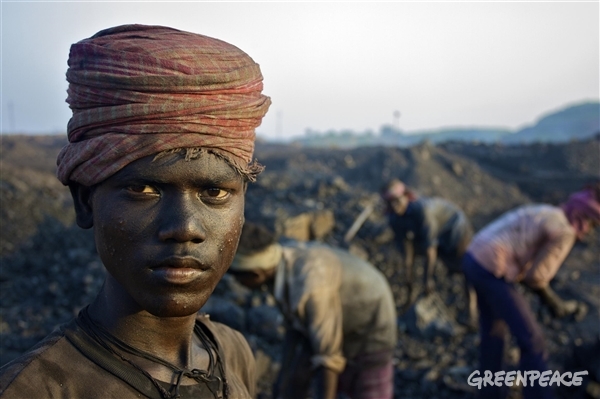 Co-authored by Ashish Fernandes, a campaigner with Greenpeace

Green is in on Wall Street. Or so you'd think, if you believe the sustainability policies of some of the United States' biggest banks. Bank of America, Citi, Goldman Sachs, JP Morgan and Morgan Stanley all have paid lip service to environmental sustainability and the transition to a low carbon future. Yet these same institutions have all lined up for a piece of a controversial share offering from one of the world's largest coal miners - Coal India Limited. Supporting this sale means aiding environmental and social injustice in some of India's poorest regions. If American banks care at all about the policies they've espoused, they'd stay well clear of Coal India.

Coal India Limited is one of the largest coal miners in the world, and almost all of its coal comes from destructive open pit mines, most of them in the forested regions of Central and Eastern India. Forests that tribal communities depend on for their daily livelihood. The same forests that inspired Rudyard Kipling's Jungle Book, and that today still harbor tigers, leopards, sloth bears and elephants.

When Coal India descends on these remote locations, what follows is predictable: tribals displaced and left with no source of livelihood, forced to move into cement and tin boxes that serve as houses, forests clear-felled, streams and rivers fouled. A few of the displaced might be "lucky" enough to get manual labour jobs in the pit that replaces their forest. Their children often end up working along side them or scavenging coal to sell in the informal market - a shocking violation of India's child labor and safety laws.

This company's business model is devastating: destroy forests and endangered wildlife, uproot ancient tribal cultures, forcibly displace those who refuse to move, all to replace the aforementioned forests and cultures with an industrial wasteland. Above all, don't let respect for human rights or the environment get in the way of production. All this to produce coal, the burning of which is responsible for approximately 100,000 deaths a year in India. This is the company that Bank of America, Goldman Sachs and others are so eager to lend their services to.

If ethical and environmental reasons aren't enough to steer clear of coal, there are serious financial risks that Coal India poses to any investor. The company's stock price has nosedived. Production continues to lag far behind demand. The government of India continues to subsidize coal by keeping the prices artificially low even as cost of production increases, meaning that the share price is likely to remain under pressure and shareholder value is not unlocked.

The financial problems faced by coal are not particular to India, but are part of a larger global shift. A shift first begun at international financial institutions like the World Bank who have withdrawn support rapidly over the past year. Now large institutional investors like Goldman Sachs are also predicting that coal is going to be eroded by environmental regulations, renewable energies and energy efficiency, warning that the window for profitable investments in coal is rapidly closing.

However none of this has stopped the big banks involvement in a government of India plan to sell 5% of its stake in Coal India in order to raise over a billion dollars on international markets. Reports from India indicate that Bank of America, Goldman Sachs, Credit Suisse and Deutsche Bank are all prepared to help raise that money, by managing the share sale. The previous share offer in 2010 attracted over two billion dollars in international capital, but given the company's struggles since then, and a global downturn for coal, this time it might not be such an easy sell.

The CEOs of Bank of America and Goldman Sachs will need to justify their involvement with Coal India while continuing to claim a commitment to social justice and a more sustainable, low carbon economy. They will trot out tired myths about the poor in the developing world having no choice but to rely on coal. The problem is there is simply no moral justification for supporting coal production in India - it's not the poverty fighting saviour the industry claims it is.

With the moral justification for coal gone, and the economics quickly souring, the financial case for moving capital out of the coal sector has never been stronger. The question is will American banks read the writing on the wall?