Next week, the world's Catholic bishops will descend upon Rome for an Extraordinary General Council of the Synod. This rare meeting of church leaders has been convened by Pope Francis, who has signaled a willingness to change the Church's direction to meet contemporary challenges to family and marriage. In a country where about a quarter of the population identify as Catholic, how does the American public's attitudes about marriage, divorce and cohabitation accord with those of the Catholic Church? And what do American Catholics think? From the Roper Center for Public Opinion Research archives:

In a 1954 poll, 53% of Americans told Gallup they "believed in" divorce. Despite the cultural upheaval of the 1960s, in a pair of Virginia Slims polls conducted with men and women in 1970, a similar number of both sexes said they favored divorce as a solution if a marriage isn't working out. Over time, the proportion favoring divorce increased slightly, then declined. 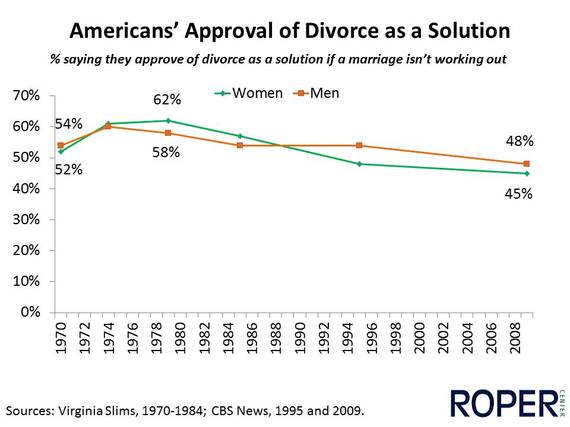 Americans may be split on divorce as a solution to marriage problems, but most do not see it as inherently immoral. In a 1987 LA Times poll, just 27% of Americans overall said they believed divorce was always or often a sin. Over twenty five years later, only 21% of all Americas in a 2012 Pew poll said divorce was morally wrong.

In 1977, Time/Yankelovich, Skelly & White asked Americans if living together outside of marriage was wrong. Just over half said it was not, 44% said it was. Since then, attitudes have softened considerably. In 2012, a majority of Americans were ready to back not just cohabitation, but cohabitation without any promise of eventual marriage. Just 29% of Americans in the General Social Survey disagreed with the statement: "it is alright for a couple to live together without intending to get married."

Americans' personal experiences are in line with their beliefs. A 2007 Newsweek/PSRA survey found that 28% of Americans had been divorced one or more times, while 44% in a 2013 Pew poll said they were currently living with a partner or had done so in the past.

Despite the Church's strict teachings on the subject, Catholics view the morality of divorce similarly to other Americans. In the 1987 LA Times poll, Catholics were just as likely as the general public to say divorce was a sin (27%), and Catholic attitudes were again in line with the total population in 2012, with just 19% of Catholics thinking divorce was morally wrong. Interestingly, in that Pew poll, Protestants were slightly more likely (28%) to say that divorce is morally unacceptable. Catholics were also unconcerned about what was once called "living in sin": just 20% in the 2012 General Social Survey disagreed with the assertion that it was alright for a couple to live together.
American Catholics may share the general public's attitudes, but when it comes to divorce, they are slightly less likely to have acted on them. Fewer than one in five Catholics in the 2007 Newsweek/PSRA poll said they had ever been divorced. As for cohabitation, 37% of Catholics are doing so currently or have in the past, according to the 2013 Pew poll.

What Pope Francis should do

Despite the low number of Catholics who express disapprobation toward divorce, only a bare majority (52%) in a CNN/ORC International poll conducted after Francis' installation as Pope thought he should allow Catholics to divorce and remarry without getting an annulment. Some Catholics appear to separate the issue of the Church-sanctioned dissolution of a marriage in annulment from the issue of legal divorce from, ascribing a moral dimension to one and not the other.

Or perhaps American Catholics' relatively low interest in changing policies on divorce simply represents a choice of priorities. The same CNN/ORC asked Catholics about a number of other things they might like to see the new Pope do. High numbers wanted to see new policies allowing priests to marry (64%) and allowing Catholics to use birth control (76%), but above all, addressing sexual abuse by priests (90%). Such strong support for a new direction in this area is not surprising: for American Catholics in recent years, the sex abuse scandal has swamped other issues as the most important problem for the Church. 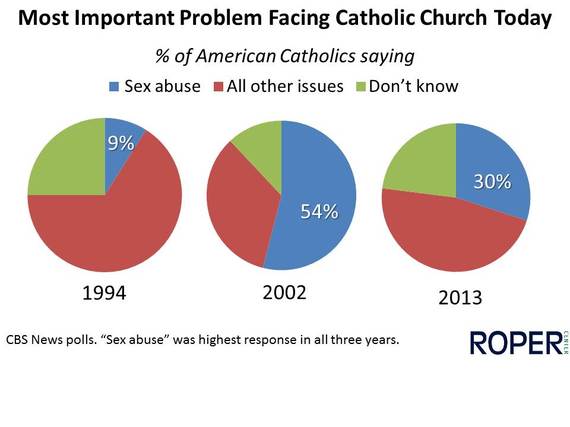 A Moral spokesman for all people

US media are likely to pay close attention to events at the Vatican this week, for Americans, even non-Catholics, show high levels of interest in the Papacy. Almost six in ten respondents in a February 2013 CBS News/NYT poll said they were following the resignation of Benedict and the selection of the new Pope very or somewhat closely. The interest is not mere curiosity; the American people see the Pope as having an important role in the world. In a 2005 CBS News poll, 59% of Americans said they considered the Pope a moral spokesman for all people. Only a third saw him as a spokesman for just Catholics.

And Americans appear to like what this new Pope is saying, giving Pope Francis higher approval ratings than his predecessor Benedict XVI, though he has yet to reach the peaks of popularity of John Paul II. Catholics are even more positive, with 89% saying they approved of the new Pope in 2014. 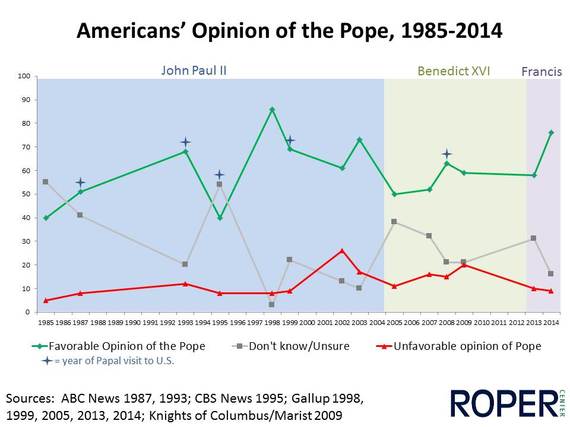 Click through the slideshow to see most and least Catholic states in the United States:

PHOTO GALLERY
Most and Least Catholic States In America
Download
Calling all HuffPost superfans!
Sign up for membership to become a founding member and help shape HuffPost's next chapter
Join HuffPost