This type of ignorance isn’t bliss.

Americans have a tendency to overstate the number of Muslims living in the United States -- and at least 13 other countries are dealing with the same misconception. 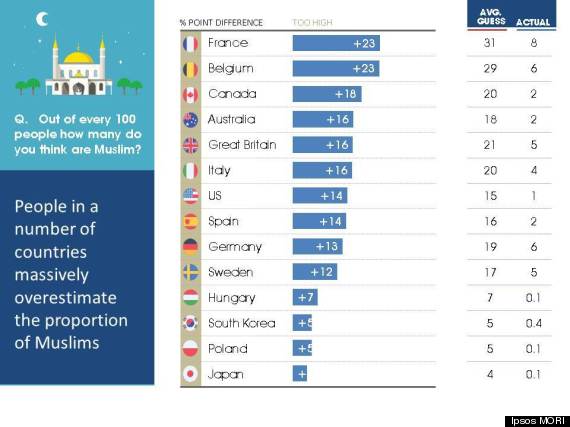 Only 1% of America’s more than 319 million residents are Muslim, according to the research group Ipsos MORI. But during a recent global survey, Americans told researchers that the Muslim population is 15 times greater than it really is.

On the other hand, Americans grossly underestimated the number of Christians living in the country -- with an average guessing around 56% when the true figure is closer to 78%.

The countries that fared the worse at accurately guessing the number of Muslims within their borders were France and Belgium, both of which guessed 23 percentage points too high.

Japan did the best, falling only 4 percentage points away from the truth.

While the figures only represent guesses, the research group’s managing director Bobby Duffy said that these misperceptions may have a real impact on policy-making.

“We are sending a message about what’s worrying us as much as trying to get the right answers,” Duffy told the Guardian.

Edgar Hopida, communications director for the Islamic Society of North America, says the Muslim community is feeling the ramifications of these misconceptions very deeply -- with some politicians trying to pass anti-Sharia laws and police departments expanding surveillance on Muslim organizations.

“There are segments of the community that fear that Muslims are taking over,” Hopida told The Huffington Post. “We need to dial down on the rhetoric and dial down on hysteria.”

Along with the questions about faith, the researchers also asked participants to guess at percentages of immigrants, murders, teenage pregnancies, and a number of other factors.

The United States actually came in as the second most ignorant country on Ipsos MORI’s “Index of Ignorance,” following Italy which came out on top. Swedes managed to guess the most accurately.

The Ipsos MORI survey used an online panel to survey 11,527 people between August 12 and August 26, including more than 1,000 adults in the United States.

American Muslims in the Arts