There are a number of things I take issue with in the blog post"The Framing of Gender Apartheid: Amnesty International and Prostitution" by Tiana Bien-Aime, Executive Director of Coalition Against Trafficking in Women.

But first, I want to highlight concerns and beliefs we share: I am also concerned by any assertion that paying for sexual consent is a human right, and I agree that exploitation and abuse by third parties is unacceptable. I am concerned by trafficking as well as economic coercion into the sex trade. I am concerned by the economic and social marginalization of women, especially indigenous women, women of color, migrant women, and women in the global south. I agree that the sex trade should never be viewed as a solution to poverty and global inequality and unemployment. And I agree that no one should have to enter the sex trade because there are no other viable economic options and that states need to remove barriers from exiting the sex trade.

Amnesty staff share our concerns, and they were formative in shaping Amnesty International Council's "Decision on State Obligations to Protect, Fulfill, and Respect the Human Rights of Sex Workers." Further, Amnesty's International Council requires that these concerns are integrated into Amnesty's final position on sex work.

What I take issue with is the reduction and decontextualization throughout Bien-Aime's blog of Amnesty's support of decriminalization and of the circumstances and conditions of people engaged in commercial sex and of women globally. 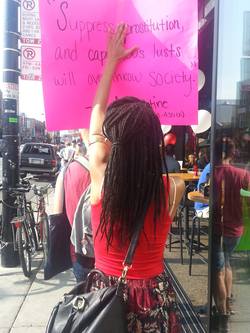 In her blog, Bien-Aime focuses on Amnesty's support for "decriminalization" and excludes the other 690 words in Amnesty's resolution as well as the thirteen points that contextualize it. Had Amnesty simply called for decriminalization without also addressing the broader context of discrimination and exploitation and violence and economic and gender inequality, Bien-Aime's imagined dystopia might have had weight. Yet Amnesty did not, and it is hard to see how the existence of the sex trade - with protections against trafficking, exploitation and violence, with simultaneous uplifting of systematically marginalized groups and gender equality, with the imperative to reduce economic push factors into the sex trade and barriers to exit - would lead to the Atwoodian dystopia Bien-Aime paints.

Bien-Aime also reduces the groups that shaped Amnesty's policy to "pimps" and "playboy culture." If Amnesty developed a human rights position based solely on the input of third parties and sex positive feminists, I would also be outraged. But they didn't. The ICM resolution was developed over a two-year period of global consultation, and support for the inclusion of decriminalization in that policy came from the Global Alliance Against Traffic in Women, the Association for Women's Rights in Development, Lamda Legal, the Women's Global Network for Reproductive Rights, the American Jewish World Service, and dozens of other anti-trafficking, LGBT, women's, sex worker, and human rights organizations (not to mention thousands of sex workers) globally. The Coalition Against Traffic in Women, as well as other organizations and individuals that oppose decriminalization also participated in the consultation process, and I believe their concerns were heard and shaped attention to economic coercion and trafficking and exploitation in Amnesty's final resolution. 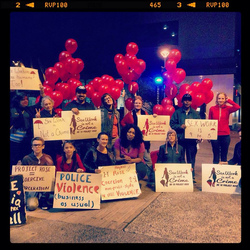 On the one hand, Bien-Aime views the conditions of "poor, low-caste and invisible girls and young women" in the Indian sex trade independently from the material conditions and other economic options available to these women. But, as One World Action asserts, "Dalits are often bonded labourers. Over generations they have been relegated and forced to do menial, degrading and subservient jobs such as cleaning, sweeping and removing human excrement." This begs the question: if clients and third parties were suddenly criminalized, would the lives of poor and low-caste women improve?

Research, in India, in Chicago, around the globe, suggests that it wouldn't. These studies repeatedly point to Amnesty's conclusion: that supressing the sex trade or "eroticizing equality" does nothing improve the lives of marginalized individuals in the sex trade--that their lives can only be improved by holistically addressing the economic and social framework of their lives. And from my work with Sex Workers Outreach Project, I know that people enter the sex trade from across social strata, and that their work conditions and vulnerability to exploitation and violence often parallel the other options they have. If some sex workers freely choose to enter sex work and if conditions and vulnerabilities are diverse, shouldn't we focus on expanding the framework from which all women choose, and focus on improving the conditions of all individuals who sell sex, regardless of what led them to do so?

On the other, Bien-Aime reduces the source of societal gender inequality to the sex trade, writing that "as long as women are for sale, no woman will be viewed as equal in corporate boardrooms, in the halls of legislature, or in the home." Yet to me, it seems that the sex trade has a marginal role in perpetuating gendered roles compared to other industries: fashion and film and media. Further, if our concern is the representation of marginalized women in leadership, it seems irrational to focus on the sex trade rather than discrimination, based on race or class or caste or gender identity, as the primary barrier. 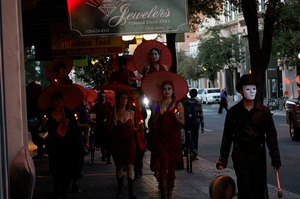 Currently, the ILO estimates that 21 million individuals are trafficked in labor globally, 4.5 million in the sex trade. Children in India as young as 6 are compelled to enter agricultural work. In the United States, sex workers experience an occupational mortality rate 400 times greater that of the average worker. Globally, sex workers are disproportionately vulnerable to violence and discrimination, and in Canada, Sweden, and Norway, the criminalization of sex worker clients leads to displacement, disruption of screening practices, and an even greater vulnerability to violence. In Russia, over a third of sex workers report being coerced to have sex with a police officer, and in Chicago, African-American street-based sex workers are as likely to engage in coercive sex with a cop as they are to be arrested. In Nigeria, police bulldoze sex worker homes on the grounds that those homes are being used for commercial sex. In India, real estate developers, charities, and police collaborate to bulldoze red light districts, leaving sex workers tens of thousands of sex workers homeless. In Norway, sex workers face eviction and rental discrimination for using their homes for commercial sex as landlords face increased scrutiny under laws that criminalize brothel-keeping. And in the United States, increasingly severe third party laws are commonly used to prosecute sex workers who work together, share a flat with others, or even place their own advertisement or work out of their own flat. 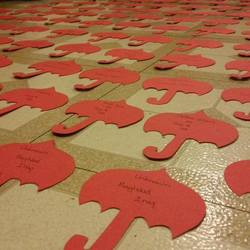 Bien-Aime ends by stating that a " visionary human rights organization crafts its mission on what we'd like the world to be, not accommodate the untold suffering that exists." I believe Amnesty International did just this. By incorporating the cultural, gender, and human rights of marginalized groups into a policy to address the human rights of people involved in the sex trade, Amnesty's vision for the future is a world where every individual chooses work from a spectrum of viable options. A world where women (and people of color, and indigenous communities and ethnic minorities) are no longer subjugated. And a world where engaging in the sex trade no longer means vulnerability to discrimination and isolation and exploitation and violence--where the marginalization and exclusion and vulnerability of sex workers-- is no longer accepted as an eternal, unchangeable fact.

Addressing inequality and a complicated web of intersecting oppression and addressing societal discomfort with the inclusion of people who engage in commercial sex is harder than blaming the sex trade for the exploitation and marginalization of women and calling for it's abolition. It's harder, but it's a strategy I support, and it's a strategy I view necessary to protecting the human rights of millions of people around the globe.