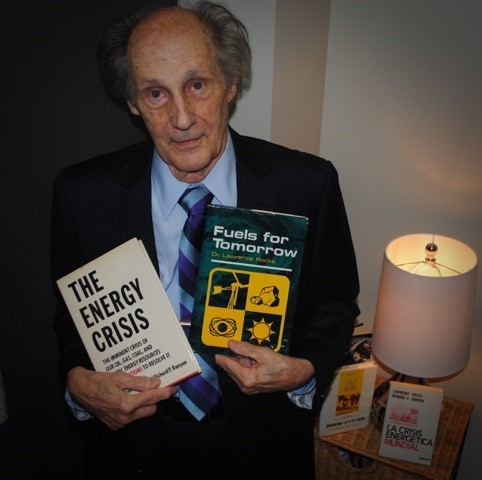 "An idealist is one who, on noticing that a rose smells better than a cabbage, concludes that it will also make a better soup." - H.L. Mencken

Discussions about climate change and the environment seem endless, and they are unfortunately dominated by celebrities and conservative pundits, all of them highly opinionated yet sorely lacking any credentials on the subject matter. This intractability from both sides has led to continued polarization resulting in a stalemate that serves no one.

Being a political centrist, I am always looking for a sensible middle ground, so I sought out the advice of Dr. Lawrence Rocks, who helped create the Department of Energy and authored the bestselling book, The Energy Crisis.

Dr. Rocks and I had breakfast recently in a midtown coffee shop where he gave me his pragmatic and simple assessment regarding the environmental debate. "We drill for oil because people need it," said Dr. Rocks. "It's misguided goodwill to assume we can exist without certain necessities, so you can't leave people out of the equation."

Dr. Rocks agrees that our climate is being altered but says we must consider that 20 - 25 percent of the carbon dioxide in the atmosphere is a result of 7.2 billion people and farm animals. These 7.2 billion people need to breathe and have cars and homes which require steel (made from coal), glass, aluminum, chrome, rubber and wood.

My response to this was to ask Dr. Rocks a simple: What should we do? Fortunately, he provided me with some succinct answers.

• Solar electricity has failed for 40 years because it's not suited for our power grid. Instead promote solar architecture as an energy conserver, which will launch a building boom.

• Eliminate biofuels because the energy input is greater than the energy output and thus an energy waster. Methane from bio-wastes are a far more serious "climate changer" than carbon dioxide.

"Everyone is trying to vilify everyone else instead of working towards a solution," said Dr. Rocks. "There's optimism, and then there is starry-eyed optimism and we need to be pragmatic if we are going to successfully address environmental concerns."

Following our breakfast, Dr. Rocks joined me on my AM970 radio program, where we discussed climate change and the environment in detail. A podcast is available here.