If "a picture is worth a thousand words" then please, allow me this view: 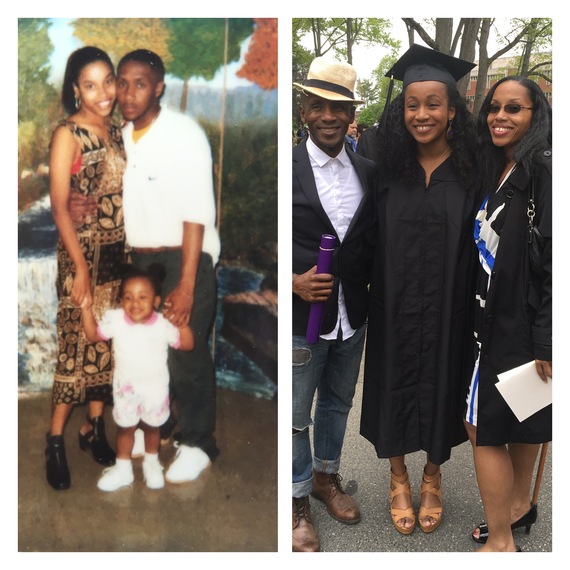 In the juxtaposition of pictures, observe the one on the left, what do you see? At first glance, you will probably come away with an impression--one that will vary tremendously based on your social learning. But "isms" aside, the consensus would probably be a young couple, of color, and their ultra adorable little girl (that's KJ by the way).

Now observe the second picture, you see the same couple with KJ, they are older, she is graduating --from Amherst. Her degree is in Political Science and French. She will work at a lucky law firm before choosing a law school at a future date. She has lived in France, and has traveled more than most people at the tender age of 21.

KJ is by all accounts an exceptional child --as a parent, I know I am somewhat biased in my praise, but believe me, she is! Allow me to take you once again to the pictures.

Observe again the one on the left; it was taken in Greene County in the summer of 1996. Greene is some three hours upstate from New York City. It's most beautiful in the spring and fall where the panoramic mountain ranges serve as nature's muse.

However, the pretty forest backdrop you see in the picture? Well, that's just an illusion --placed there to intentionally mask the inhumanity of the situation.

The picture on the left was taken in the Greene Correctional Facility visiting room. If you look again closely, you will notice my standard (and mandatory) state green pants. So as you can now imagine, my relationship with KJ for the first nine years of her life was anything but normal!

I was 19 years old, trapped on Rikers Island, without bail, facing life in prison when KJ came into the world. It's been almost 22 years, but I remember that day like it was yesterday. It was July 20, 1994, a Wednesday. Heather was due any moment, so that morning, when I called and called, but was unable to reach her, I suspected it was time.

I made Heather a promise when I first learned she was pregnant -- it was thanksgiving night, 1993. We stood in the cold parking lot in front of her building in Coney Island to save me from the inquisition of her mother. I looked her in the eye and promised I would be there for our baby. I made many promises that night, but most I would not keep.

KJ came into the world at literally my darkest-moment--I felt isolated, trapped, depressed, I wasn't far from giving up, but something changed when I met her for the first time in that Rikers Island visiting room. I knew from that moment I would fight! Her birth reignited my faith, my belief that things would work out.

But they didn't, at least not right away. I had her picture in my bible when the judge looked at me, seemingly for the first time, then declared (in all sincerity) that he was doing me a favor by sentencing me to only 7 years to Life in prison as a first time, non-violent, drug offender .

This man, never once questioned the circumstances that lead to my arrest, or even seek to understand how incarceration would impact my family--especially KJ, who wasn't even yet one month old at the time of my sentencing.

I would miss 9 years of birthdays, and milestones too numerous to capture with mere words. Much of our relationship was cultivated through prison visiting rooms and collect calls. But it wasn't all hell. Heather, a true warrior, was determined that KJ had access to her father no matter the circumstance: 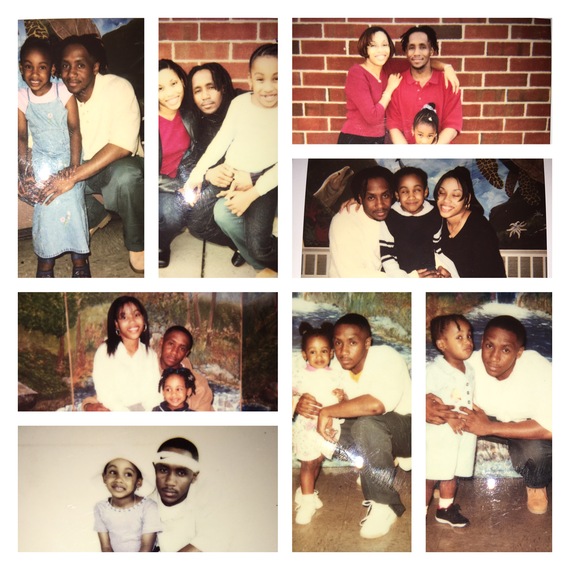 So from Coxsackie to Attica, and any other prison in New York State for that matter, Heather was there. Sometimes spending her entire weekend traveling just so that KJ and I would have a relationship. Sending picture after picture, letter after letter over 9 years. She was the glue! She embodied love, and thus gave me an opportunity to be a father to my daughter even while incarcerated.

Today, when I look at her graduation pictures, I feel a lot of emotions. First, I feel immense pride at the resiliency, strength, courage, and beauty that KJ has manifested into the world; I also feel eternally grateful to the tribe of family, friends, and schoolteachers etc. who have helped to raise my daughter. But I also feel saddened!

Millions of children report having a parent incarcerated. More black men (aka fathers) are incarcerated today than were enslaved in 1850. Women (aka mothers) are the fastest growing prison population. Most of the research tells us that children impacted by parental incarceration, will have tattered lives with a significant likelihood of future incarceration--but this doesn't have to be so!

KJ doesn't have to be the exception. Even in the face of a system as destructive as mass incarceration, we have a formula --its "love"...not in theory, but in praxis.

It's the same formula Baldwin gave to his nephew James, and implored him to pass to his children, and their children's children.

It's the same one our ancestors used to survive the "door-of-no-return", the transatlantic journey, and countless centuries of unspeakable suffering.

And it's the same one that we will utilize today, and everyday forward to unify our families in this fight for our collective humanity!

KJ, I love you more than words do justice! I am so proud of you! You are truly a warrior in every sense of the word. You are an example not only for your siblings (Kam and BK), but an example for the millions of children experiencing a parental loss at the hands of mass incarceration.