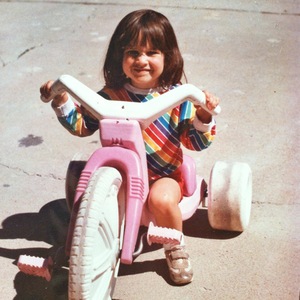 I think sometimes about what it would be like to start over knowing what I know now. I obviously would have been the coolest and happiest girl you'd ever met. But, ultimately I lack a time machine, and how weird would a 12-year-old with a 30-year-old brain be anyway. So, instead, I share my experience in the hopes that maybe you, our younger gay, lesbian, bisexual and trans* youth, might benefit.

For some context: When I was in high school way back when, personal cell phones had just become a thing. And they were incredible. You could use it as a phone, an address book AND it had the game Snake (look it up). Texting cost a gazillion dollars, so we were limited to 50 or so per month (and that was generous). Also, the internet was brand new. Our parents had to pay for it by the minute and sometimes it look longer than that to load a single webpage, but you could talk to people on other continents, and I'm pretty sure that was the birth of the emoticon.

The point is, the world -- even only a dozen or so years later -- is a very different place for today's LGBT youth. I totally get that. For better or worse, young people today have the ability to see and be seen unlike any generation before them. They have the world at their fingertips, and they will die knowing more than any of us, because they grew up in an information era where few questions have to remain unanswered.

So, for you younger LGBT kids, the generation that can Google almost anything, I want to share some things that you might not be able to search and find on Wikipedia or Urban Dictionary -- things that oftentimes you can only learn from experience. Because, so much is different for you today and yet so much remains the same. I think about your need for love and care, and it looks exactly like mine, and like the generation before me, and the one before theirs. Your desire to belong is one we, too, have experienced, as will generations to come. And your fear of rejection, although very real, is not new.

The things I so badly wish I had known then seem simple at first glance or with hindsight, but they weren't easy lessons learned. There are only three of them, so indulge me:

We are not alone. When I got called a "dirty Jew" at school, I could come home and be comforted by my family who would remind me that I wasn't alone; they were like me. And my parents would wrap their arms around me and tell me about the rich history and culture of Jewish people and their achievements and tribulations. I felt like I belonged to something bigger and better than those school bus slurs would suggest.

But, on the other hand, my parents and sister are straight, and so were most people in my life. Because the assumption is that we're all born straight, I didn't even let myself think I could be anything else

Yet, I knew I was different. I really couldn't understand what it meant to have butterflies in my stomach over a crush on a boy. Their butts, for some reason, held no appeal. That feeling in the movies and in songs, I just didn't feel it. It kind of scared me, because I figured one of two things was happening: I was either dead inside or everyone was lying about these feelings of twitterpation. Neither option promised me a life of happiness, and that loneliness and lack of hope was something awful.

So, maybe nobody in your immediate family is LGBT, or in your group of friends, or at your church, but there are thousands and thousands of us like you. Our stomachs know butterflies and our hearts know love, just not for a person of the other sex. And there are beautiful people achieving great success who were born into bodies that don't match their gender identities. We are young and old, people of color and white, near and far and many of us work tirelessly to create a world were no kids have to experience that despair. We are here with you.

We are stronger than we think. And this I promise you. You see, I was one of those kids who didn't think I was made for this world. I'm here, though, because my dad came home from work early the day I tried to quietly escape into nonexistence. That, and quite unbeknownst to me, I was strong enough to accept help and support. Please trust that I know the feeling of being too tired to breathe, and too sad to care. But I also know that it is possible to not always feel that way.

To those who might be growing tiresome of the weight, I have one request: Please muster any ounce of energy you've got and find a safe adult in whom you can confide. Right away. And to those, LGBT or otherwise, who are not similarly suffering, please look out for those who are. We can do anything when we have each other.

We are worth it. For a long time we have had to fight this notion, often perpetuated by our clergy and elected officials, that there is something fundamentally wrong with us. Many, as a result, feel undeserving of love, health and companionship. But nothing is further from the truth. Nothing.

So, perhaps our walk through life may not be paved with golden bricks, but we are no stranger to challenges. When we stumble, we get back up, because we are not alone. We are strong. And we are worth it.

For those looking for additional resources, use those lovely smart phones and computers to check out:
Download
Calling all HuffPost superfans!
Sign up for membership to become a founding member and help shape HuffPost's next chapter
Join HuffPost