When paleontologists discovered the 47-million-year fossil of a prehistoric horse in 2000, they didn't yet realize a rare treasure was hidden inside.

Now, high-resolution X-ray technology has revealed the Eurohippus messelensis mare was pregnant. In fact, the size of the unborn foal discovered in the fossil indicates that it was close to term, and its position in the mother's uterus indicates the mother and foal did not die during labor.

“Almost all of the bones of the fetus are still articulated in their original position," Dr. Jens Lorenz Franzen, a researcher at the Senckenberg Research Institute in Frankfurt, Germany and leader of the team that conducted the new analysis, said in a written statement. "Only the skull is crushed." 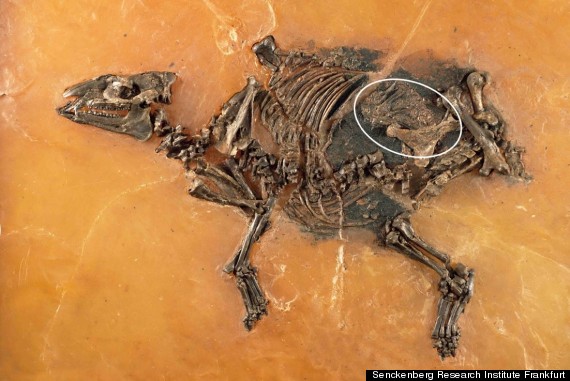 The fossil of the 47-million-year-old mare, which was discovered in Grube Messel, Germany.

During the analysis, the researchers detected the remains of the ancient mare's uterine wall and the broad ligament, which connects the uterus to the backbone. The researchers also identified the horse's placenta, making it the second known example of a fossil with this structure preserved.

These structures indicate that reproduction in the tiny ancient horse, which was roughly the size of a terrier, was similar to reproduction in horses today, according to the researchers. 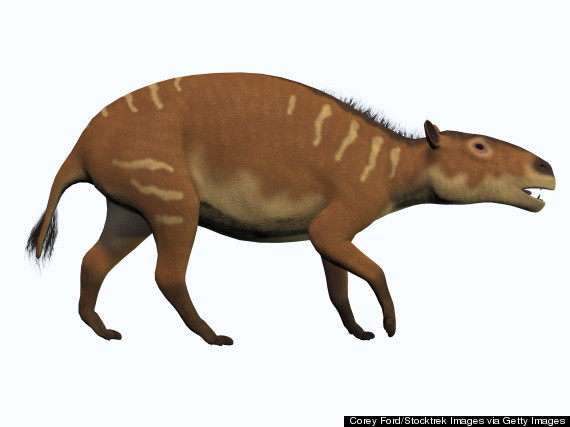 The remains were first discovered in the Messel Pit, a fossil-rich site 20 miles southeast of Frankfurt. Fossils of more than 1,000 species of plants and animals dating back to the Eocene Epoch--between 57 million and 36 million years ago--have been found on the site, according to UNESCO.

Scientists believe an ancient lake at the site may have contained poisonous volcanic gases which killed many of the animals, including the Eurohippus specimen. Since no oxygen was present at the bottom of the lake, anaerobic bacteria there then decomposed the body to create a remarkably detailed and intact fossil.

The new findings were presented Nov. 6 at the 2014 annual meeting of the Society of Vertebrate Paleontology in Berlin.