UNION SQUARE -- It's easy to pass by the Decker Building at 33 Union Square West or the building at 860 Broadway, now housing a Petco, without knowing their historical significance in the world of Pop Art.

There's no sign explaining that Andy Warhol had his "Factory" here, first in the Decker building, in 1968, before moving a block away in the 1970s to Broadway and 17th Street to make his silkscreens, print his magazines and do his screen tests.

Warhol finally has his tribute: The Andy Monument.

The pop art icon, who worked in the Union Square area until 1984 and passed away in 1987, is returning to the area in the guise of a ghostly silver 10-foot-tall sculpture by Rob Pruitt.

The shiny chrome statue towers over the pedestrian plaza at 17th Street, across from the park and near the spot where he was shot by Valerie Solanas in 1968.

Pruitt fashioned the statue, commissioned by the Public Art Fund, by using digital scanning of a live model -- his friend and Cincinnati art collector Andy Stillpass -- and hand sculpting.

He imagined Warhol in 1977, dressed in Levi's 501s, a Brooks Brothers blazer, wearing a Polaroid camera around his neck and carrying a Medium Brown Bag from Bloomingdale's, which in Pruitt's mind, is filled with copies of Interview magazine. Warhol founded the magazine in 1969 and would often hand out copies on the street, Pruitt said.

Also, Pruitt recounted Warhol's fondness for Bloomies. The artist, who considered it heaven, famously once said, "Death is like going to Bloomingdale's."

Warhol's world, filled with artists, junkies, drag queens and other social misfits, attracted people like Pruitt to come to New York. He came here in 1982 to go to Parsons, leaving the suburbs of Washington, D.C. where he had four cats -- Andy, Halston, Calvin and Liza -- named for Warhol's pack of Studio 54 friends.

"It's kind of inexplicable how that information got to me in pre-Internet existence," said Pruitt, who first met Warhol at a book signing the artist held at a D.C. bookstore. Pruitt bought a bunch of Brillo boxes and Campbell's soup cans for the artist to sign, which Pruitt still has in his childhood bedroom.

Pruitt believes the statue -- only slated to be on view through Oct. 2 -- will become a pilgrimage site.

"I think it's a wonderful bookend to the Statue of Liberty," said Public Art Fund president Susan Freedman. "He was a beacon that brought people to New York in a very different way... for another generation of seekers and people feeling like outcasts."

Jennifer Falk, the executive director of the Union Square Partnership, anticipates there will be even more than the 150,000 daily visitors passing through Union Square because of the statue.

Warhol joins the park's statues of George Washington, the Marquis de Lafayette, Abraham Lincoln and Mahatma Gandhi, who is often dressed up by parkgoers.

But not everyone knew what the statue was about.

"It's eye catching to say the least," said Kay Kim, 35, who was strolling her baby past the statue.

She first asked if it was an advertisement for Bloomingdale's. "It has a Medium Brown Bag," she pointed out. "I thought it was one of those animated people that stand still. I'm waiting for it to move." 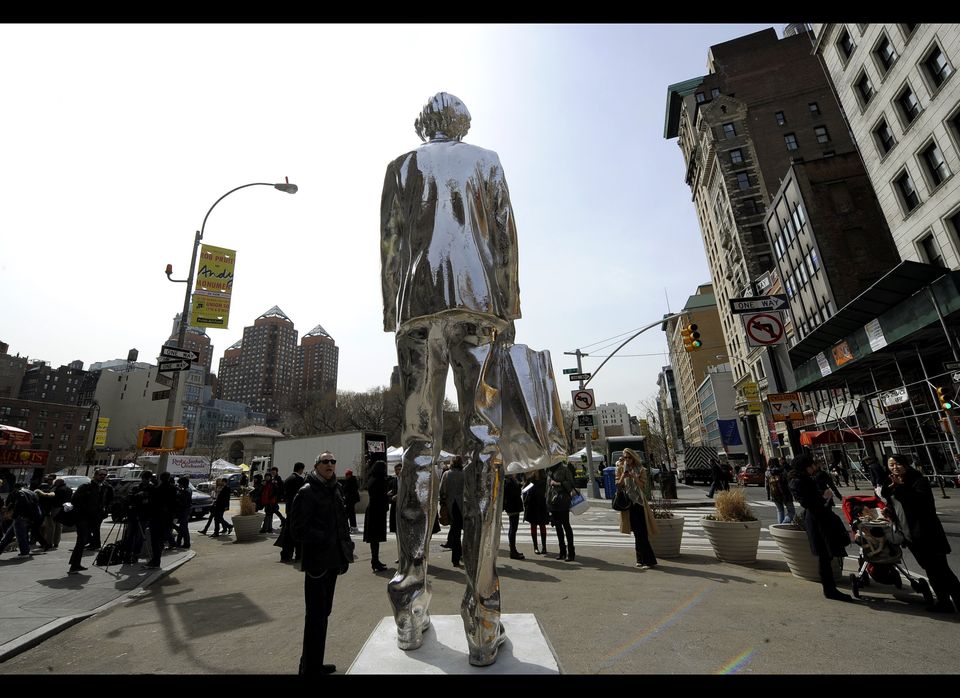 1 / 5
The Andy Monument, by artist Rob Pruitt,
The Andy Monument, by artist Rob Pruitt, his homage to Andy Warholthe father of Pop Art and one of New Yorks enduring cultural icons is unvieled in front of Warhols former Union Square Factory studio in New York March 30, 2011. The artist made the stature as he imagined Warhol in 1977 dressed in Levi's 501s, a Brooks Brothers blazer, wearing a Polaroid camera around his neck and carrying a Medium Brown Bag from Bloomingdale's. AFP PHOTO / TIMOTHY A. CLARY (Photo credit should read TIMOTHY A. CLARY/AFP/Getty Images)
Getty