"I happen to be a huge 'Lord of the Rings' fan. I do an annual marathon of the extended editions."

I've heard Anna Kendrick mention this before, but it never ceases to surprise me. After all, that's a really long time to invest every year to watching a series of movies. Then again, this is someone who, as she states here, has seen "The Avengers" twice in the theaters. I think it's safe to go ahead declare that Anna Kendrick is a nerd, just like us.

I've read enough interviews with Anna Kendrick to get a sense of when she's into a movie that she's promoting and when she's not. The interesting thing here is that most actors really aren't into the idea of promoting an animated film because, for them, it was just a couple of days in the recording booth. Having said that: I got the impression that Anna Kendrick is really into "ParaNorman." To the point that it didn't feel like she was promoting "ParaNorman" as much as she just wanted to discuss "ParaNorman."

In "ParaNorman," Kendrick voices Courtney, the sister of Norman, a young boy who has the ability to talk to the dead -- which eventually leads him and a group (including Courtney) on an adventure to save their town from an angry witch. Just why that witch is so angry sets up a surprising third act that pushes "ParaNorman" to a different, superior level. Here, Kendrick discusses her first animated film, why she considers "Twilight" her "day job," and what movies she watches in her free time when she's not watching "Lord of the Rings." Oh! And she was restrained enough not to hang up on me when I brought up the fact that she was in an episode of "Viva Laughlin."

The HuffPost office is currently having a party. If you hear Gotye in the background, I swear that is not me jamming Gotye.
[Laughs] No worries. I'm leaning over a balcony, so if you suddenly hear nothing on the end of the line, it's because I've dropped the phone and it's about to crash on some poor tourist's head.

That would be unfortunate, but I would have a scoop.
You'd have some dirt on me.

I have to say, "ParaNorman" was not what I was expecting at all.
No, it's funny. When I saw the trailer and then I saw the movie, I realized -- and I think they're right to do this -- it presents itself as kind of a "kids try to save the town from zombies." But, really that whole plot line kind of exhausts itself by the halfway point of the movie. And there is all of this other kind of mystery and adventure to be had and figured out. And I think that's so great. I remember someone saying something about trying to write a screenplay: What they thought was an entire screenplay really should have just been the first half hour. And I thought that was so smart, to not just rest on, "This is what's supposed to be happening at the half hour mark and this is what's supposed to be happening at the hour mark." I feel like there is so much going on in this movie. And there's chaos in the movie in the way that I associate specifically with thriller films -- not really with horror, adventure films. So it's great that they set up so many things that have all of these payoffs later on that felt like you weren't even going to go there. And the third act has this kind of scale to it that feels like the very fabric of the universe is kind of coming unglued. And that's all in a movie you thought was just about zombies invading one small town.

You haven't done voicework before. Is what you just said why you wanted to do this one, or do you really have no idea before you start an animated film?
To be perfectly honest, I had never been offered anything before. And I was absolutely thrilled at the idea of doing it before I even read the script. But, then, reading the script, I got really excited at that moment where I realized that it is kind of a "kids on an adventure" movie. Which was my absolute favorite kind of thing growing up. And even now, the end of "Harry Potter and the Order of the Phoenix" ...

And it has a "Goonies" element to it, too.
Completely! That's absolutely a good example ... of kids on an adventure where the adults don't know what's going on and don't know what the stakes are. So, I love that. And a lot of the additional elements of the movie that my character is not in, I just didn't picture it being quite so fantastical on such a big scale. It felt more like a quiet wrap up and I didn't realize what a crescendo it really was. So, yeah, it was an amazing surprise to see what they ended up doing visually and emotionally at the end of the movie.

In this movie something quite terrible happens to a young girl. I'm not sure audiences will see that coming.
No! Yeah, I agree. But I don't think any of it is too heavy because I always appreciated when I was a kid when there would be adult scenes that I got to be a part of. And that it's not just a ghost story for no reason. It's about the fact that actions have consequences. And that's a much bigger theme then just "zombies are rising from the grave." The idea that acting out of fear can have lasting consequences is a very adult theme.

And I won't say whom, but there's a character that is openly gay. Which got a great reaction from the audience.
Yeah and we did a lot of safety versions where we tried other things. But we were all really rooting for the idea that that would be his wrap up. So we kind of did it under duress a little bit, just to cover our asses. But everyone involved, frankly, wanted that to be what ended up happening.

If someone asked me to guess, I would have no idea what movies you are looking forward to. Like, are you looking forward to "The Hobbit"?
I happen to be a huge "Lord of the Rings" fan. I do an annual marathon of the extended editions. I was talking to Joe Swanberg recently about movies that we're seeing and how we just realized in the last six months I've been seeing so many escapism movies that it's a little embarrassing. Like, I've seen "The Avengers" twice in theaters. But, you know, I'm just going through a weird phase, I guess. Just a couple of nights ago I saw "Beasts of the Southern Wild" and I remember driving way out of my way to see "Enter the Void" in theaters. So, I try to keep it eclectic.

I assume you're looking forward to "The Company You Keep."
Yes, very much so. I have a very small part in it, but that was like a dream come true when that phone call came in. You know, it was a really exciting prospect and I was shooting two other movies at the time and my agent was like, "You don't have to do this. You're going to run yourself into the ground a little bit." And I was like, "I do have to do this. I absolutely do!"

I find it interesting that you were on an episode of "Viva Laughlin."
Oh, yeah. It wasn't that good because, honestly -- the thing is, because I started working ... I think people think that from your first job to wherever you're at now, you kind of maintain the same level. I did a show when I was a kid, then I did this weird movie "Camp," then "Rocket Science." But there were times I needed to eat and I needed to pay rent ... and I did "Viva Laughlin" and that's what happened. Do you know what I mean?

I know the show was panned, but I only bring it up because the format of television characters breaking out in song is now is such an accepted format.
Oh, yeah, that's true. Isn't it?

Right, but people didn't like it. And now "Glee" is one of the most popular shows on television.
Yeah. You know, I didn't have a great experience on it personally, either. So, the whole thing is kind of wrapped up as a weird experience generally. I don't know. Like, I needed to pay for flights to go to my cousin's wedding. It was a practical business thing. I was just talking to Olivia Wilde about like, "Wouldn't it be nice if everything you have ever done in your career was something you were really proud of?" So, really, I think there's maybe three people in the entire world who can say that. And I think that makes you more human to have had experiences based on ...

I mean, that can help you, right?
Yeah. It helps you just relate to other actors and you learn something those bad experiences.

I didn't know about your bad experience, so thanks for actually answering that question instead of your phone mysteriously actually dropping off of that balcony.
[Laughs] Oh! "What? I can't hear you! Bye..."

Last year, before "Breaking Dawn Part 1" came out, I had to watch all of the "Twilight" movies because I had never seen them before. It's startling when you show up on screen. I mean, every time I thought, Anna Kendrick really is in this movie. In other words, I don't associate you with those movies at all.
Yeah, I kind of refer to it as "my day job." There are people -- probably the majority of people who know who I am -- think that is the only thing I've ever been in. Then there are people like you who didn't know that I was in them. So, it's funny, it feels like my "day job" because it feels unrelated to the rest of my career. So, yeah, you know, it was this thing that I got attached to and I went on the ride. And I'm really glad to have had the experience, while, simultaneously, not being swallowed up by the kind of juggernaut that it is. I've kind of had the best of both worlds.

The Avengers Twilight Anna Kendrick The Hobbit Lord Of The Rings

Anna Kendrick, 'ParaNorman' Star, On Her Yearly 'Lord Of The Rings' Marathon And Why 'Twilight' Was Her 'Day Job'
Comic-Con 2012 Photos 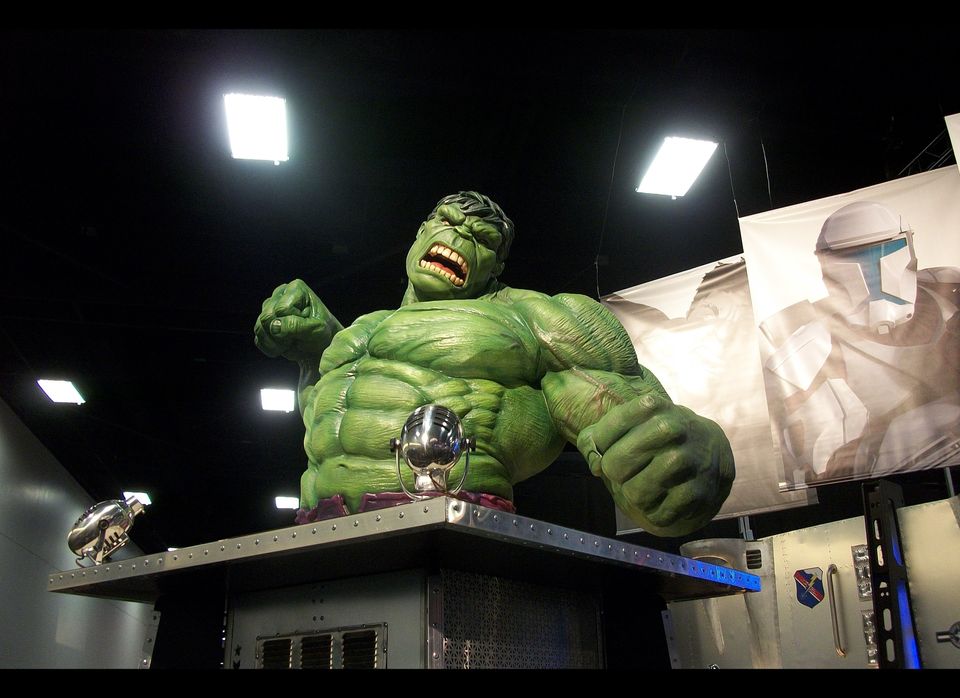