Bigotry should have no place in elections, but alas it often does. As the mayoral race in Houston enters its final stages homophobia has emerged as a potent political issue. Annise Parker, 53, is a Rice graduate who served as a council member and controller with 20 years experience in the oil and gas industry, while her opponent Gene Locke, 61, is a former City Attorney and current law partner at Andrews-Kurth. Both candidates are Democrats. If elected, Parker would be the most notable openly gay elected executive in the nation.

The Houston Chronicle Reports that the finance chair and a finance committee member of Mr. Locke's campaign heavily assisted in the funding of a PAC that sent out a mailer telling voters to oppose Parker because she is supported by the "gay and lesbian political caucus." Mr. Locke has been criticized for seeking the support of conservative Steven Hotze, who is known for opposing gay candidates and causes. Locke's two finance committee members contributed $40,000 of the $56,000 collected by Hotze's PAC recently.

Gay Baiting
This is particularly disturbing because it occurs around a time when "gay baiting" has taken center stage. An unenlightened electrician, apparently acting on his own, sent out 35, 000 color flyers with a large photo of Parker taking a prior oath of office with her partner of twenty years looking on under the all caps headline: "IS THIS THE IMAGE HOUSTON WANTS TO PORTRAY?" 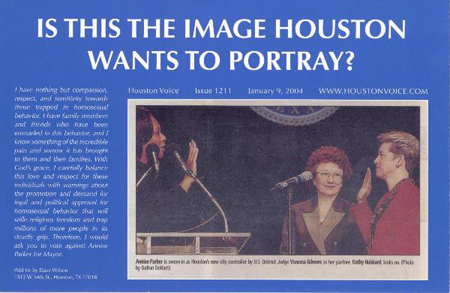 He has a point, some of the best mayors of our other large American cities like New York, Los Angeles and San Francisco have been led by traditional straight folks who only get involved in cringe-worthy public divorces from their wives after the election. Parker, who with her committed partner have two children, could send the wrong statement about how families with kids in America should actually be kept intact with two loving parents!

Unfortunately, that may be what many voters think. A 2007 Gallup poll asked respondents if they would vote for a "generally well qualified person" from their own party for president if they had various characteristics and here are the results:

A later Zogby poll found six out of ten Americans would vote for a gay candidate.

Parker who is openly lesbian, has not dwelled on gay issues in her campaign, focusing instead on public safety and jobs. When asked about employee benefits for gay couples Parker, like her opponent, said she would leave that to a voter referendum. She called her sexual orientation one of many data points that voters could use in an evaluation of her.

Four decades after Harvey Milk was murdered, and the year he was posthumously awarded the Presidential Medal of Freedom, America still has issues relating to how we evaluate one's identity as a condition for civic participation. When those who hate our President seek to smear him they manufacture bizare pitiful rumours that he's a Muslim or that he murdered a gay lover to keep him quiet. When Keith Ellison became the first Muslim elected to Congress he was castigated by intolerant radio show host Dennis Prager for undermining American civilization by not using a bible to take his oath of office.

Painful History
Houston, like many places, has a painful history related to homophobia, and it would be useful for political players to take note of it. The current discourse is somewhat more elevated now, than it was in 1985 when an unsuccessful "straight slate" sought to unseat municipal incumbents in the city who voted for employment rights for gays and lesbians. Former Houston mayor Louie Welch made gays an issue that year as he sought to unseat incumbent Kathryn Whitmire. Among his thoughtful proposals was a compassionate anti-AIDS strategy: "shoot the queers."

On July 4, 1991, Independence Day, seven years before Mathew Shepard was murdered, Paul Broussard became the "first" reported gay hate crime victim in the city. Ten young males, nine of whom were high school students, went to the predominantly gay Montrose section of Houston to "go beat up some queers." Armed with a knife, steel tipped boots, and a 2x4 spiked with nails the group accosted three gay men, asking them for directions to "Heaven." Shortly, thereafter Paul Broussard, a handsome 27year old banker, would succumb to abdominal stab wounds he sustained in the attack. The police department implemented a decoy project in the area that was scrapped after two weeks because "gay" undercover cops were attacked by assailants armed with mace, brass knuckles, and tree limbs. Just last month an openly gay 16 year old was brutally attacked by schoolmates trying to "beat the gay out of him." with fists and a pipe.

Straights Have A Role
We in the straight community should make it such that young gay and lesbian Houstonians believe they have a better chance at getting a shot at the mayor's office than a beating with pipes or knives. The issue I have is primarily not a political one, but rather an ethical one. Our Center (with the exception of support for hate crime laws) is generally faithful to its narrow mission to be careful not to carve out specific mainstream positions on most individual issues that are being civilly sorted out in the political marketplace. I personally can (and do) disagree in good faith with some thoughtful compassionate friends who oppose certain gay candidates on their policy positions, gay marriage on definitional concerns, and hate crime laws on judicial economy.

However, we must differentiate those who stake out different principled positions in good faith disagreements, from those who use wedge issues as building blocks to seek the near total exclusion and delegitimization of our fellow gay citizens from meaningful and fair participation in our diverse democracy, as well as those who use politics to bolster homophobic violence and hatred. Moreover, some of the most vocal politicians who support the ugly contention that gays and lesbians threaten their families have been among those most hypocritical in their legislative and familial activities themselves.

Gay, lesbian, bisexual and transgendered people are part of our families and our American mosaic. If Parker wins, gays and lesbians will be justifiably proud, but I think most Houstonians will hopefully make their decision primarily on the vision that each accomplished candidate has for their city, not the gender of who either may love at home. Hopefully, in the not to distant future similar sentiments on sexual orientation will be expressed by a political leader like these words by a losing conservative nominee last year:
In a contest as long and difficult as this campaign has been, his success alone commands my respect for his ability and perseverance. But that he managed to do so by inspiring the hopes of so many millions of Americans who had once wrongly believed that they had little at stake or little influence in the election of an American president is something I deeply admire and commend him for achieving.
This is an historic election, and I recognize the special significance it has for African-Americans and for the special pride that must be theirs tonight.
I've always believed that America offers opportunities to all who have the industry and will to seize it. Senator Obama believes that, too. But we both recognize that though we have come a long way from the old injustices that once stained our nation's reputation and denied some Americans the full blessings of American citizenship, the memory of them still had the power to wound.... There is no better evidence of this than the election of an African American to the presidency of the United States. Let there be no reason now -- (cheers, applause) -- let there be no reason now for any American to fail to cherish their citizenship in this, the greatest nation on Earth. (Cheers, applause.)
Senator Obama has achieved a great thing for himself and for his country. I applaud him for it, and offer in my sincere sympathy that his beloved grandmother did not live to see this day, though our faith assures us she is at rest in the presence of her creator and so very proud of the good man she helped raise.
Senator John McCain, Concession Speech, November 5, 2008