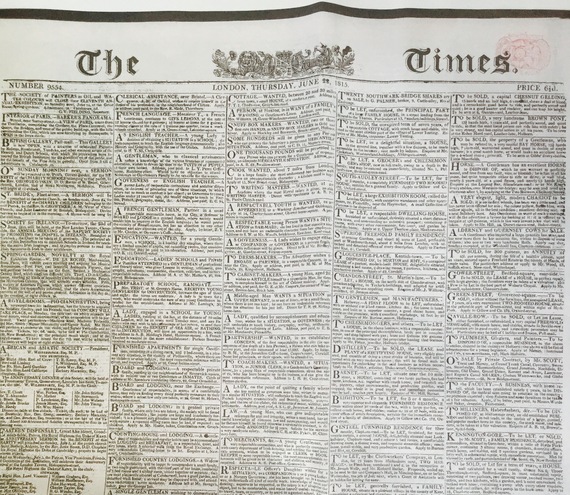 Britain has always been known for its vibrant newspaper culture. In London alone, there are 10 national titles that sell more than 9 million copies a day. And this in a country of 64 million people.

The New York Times, by way of comparison, sells 639,000 copies a day - in a country of 320 million. The British love their newspapers. On top of the 10 national titles, there are an astonishing 68 regional dailies that sell another 2m copies, and then there are 9 Scottish papers, 6 Welsh and 3 Northern Irish. Add to that the free dailies like Metro, The London Evening Standard and City AM, and you have a circulation of more than 15 million papers a day or 1 newspaper for every 4 people or so. Compared to America, nothing short of remarkable.

But now, even in Britain, the newspaper business is on the ropes.

The Financial Times (sold last week to the Japanese), reports that British newspapers, particularly the local ones, are in serious trouble.

"More than 80 British local newspapers have closed or become online-only in the past five years. The biggest remaining titles have lost one-sixth of their print circulation in 12 months, according to the Audit Bureau of Circulation." (from the FT, linked above)

The core of the problem is and has been for some time, the loss of advertising revenue. And, as papers have migrated online, the revenue from online advertising simply does not begin to match the kind of revenue that newspapers once saw, in a pre-Internet age, from printed ads. It's a death spiral.

Since their invention, the core of newspaper revenue has been the classifieds. In 1995, Craig Newmark, working on his own out of a small apartment over a garage, began a website entitled Craigslist. There, he posted community events and opened the site to anyone who wanted to advertise anything. It began as a simple, one- man operation, but it would go on, in a fairly short period of time, to eviscerate the global newspaper business.

Until Craigslist, classifieds were the lifeblood of newspapers - both from a revenue point of view and from a readership point of view. The front page of The Times (of London) pictured above, is from Thursday, June 22nd, 1815 - the day that Napoleon was defeated at Waterloo. That was a pretty big news story. But you will note that the front page of The Times was dominated by the classified ads! You have to go to page 3 to find the Waterloo story! 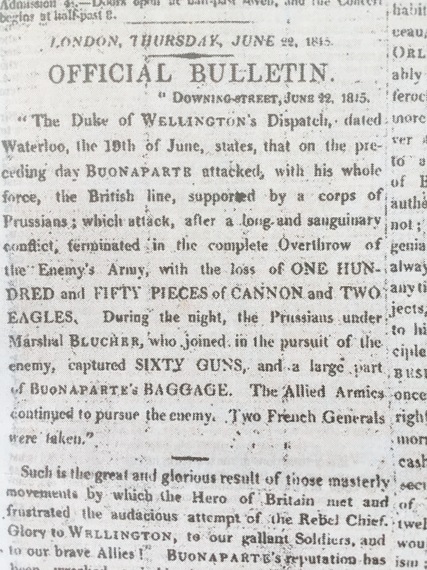 These guys knew where the bread was buttered, so to speak.

Now, when Craig Newmark grabbed the classified business, the San Francisco Chronicle, the biggest newspaper in San Francisco (and just down the street from Craig Newmark's garage) could have crushed Newmark and started their own online SFList, or whatever they wanted to call it. They could have done this with virtually no effort at all - they had a very big staff. Two or three people and a small investment and they would have been done. They had the traction, they had the brand, they had the readership. What they lacked was the courage to depart from the model they had been comfortable with for so long.

Today, Craigslist is valued at $5 billion, give or take. The Hearst Company will not say what The San Francisco Chronicle is worth, but my guess is it is a lot less than $5 billion. Newspapers have all been losing money for years, which is tragic - and dangerous in the long run to society.

But what can newspapers do?

They can take a lesson from the Craigslist experience. And yes, it is too late to start getting into the online classifieds business - that ship has sailed. But at the end of the day, what is a newspaper? It is a focus for things that a community thinks are important. (Note the front page of The Times of London).

Newspaper are now desperately trying to move their content online, from paper to screens. But they are still running their businesses in the same way - a small handful of reporters goes out and find stories and publishes them - whether on paper or screen it makes no difference.

But the digital world has moved on. If we look at the most successful online companies that are pure online plays (as opposed to transplanted businesses like newspapers), we see something they all have in common: Craigslist, Facebook, Instagram, Twitter, Airbnb - the list goes on and on - all of them - all of them - get 100% of their content from their users. All of it. There are no 'staff writers' at Facebook or Instagram.

If newspapers, particularly local newspapers, want to survive - then they must also embrace the way Craigslist and Facebook and Twitter work - as aggregators and editors and publishers - as opposed to as 'reporters'.

That is, they must 'publish' (and the online world is infinite), the musings, reporting, writing, photographs, video and much more, of everyone in their community who has something to say. This is not, of course, the traditional definition of a newspaper. But that model was created in the 18th Century and it is time to put it to bed. There is room for a voice of the community, but now, everyone wants their chance to speak. And why not?

That is where their future lies - if they have the courage to embrace it.