Seven years ago, two tall Lithuanians, with their video camera, arrived in our SoHo loft. They were sent by filmmaker Jonas Mekas to shoot a video clip of my husband, Shael Shapiro, a SoHo architect who had been instrumental in the neighborhood's historic evolution as an artist community. The video was to be shown at "George Maciunas: Father of SoHo," an exhibit at the Jonas Mekas Visual Arts Center (JMVAC) in Vilnius, Lithuania's capital.

Arturas Zuokas, former mayor of Vilnius and a television war correspondent (1989-1994) and Kristijonas Kucinskas, director of the JMVAC arrived at a strange moment. After many years, we were nearly finished researching and writing Illegal Living: 80 Wooster Street and the Evolution of SoHo, http://www.illegalliving.com, the story of SoHo told through the biography of one building where Jonas Mekas had his theater on the ground floor, George Maciunas had his office in the basement, and Shael Shapiro lived in a dark, third-floor loft facing back. We had traveled across the country and even to Hawaii to interview former residents and done extensive research at the Smithsonian and the Getty Museums. There was only one problem: we did not yet have a publisher.

Within seconds of hearing about the book, Zuokas extended his hand in a handshake and said: "We will publish it." What followed was a mad dash to the finish line with the book, published by the Jonas Mekas Foundation, arriving in time for a May 2010 launch in Vilnius, followed by a second book launch in SoHo in the fall in 80 Wooster Street.

Early on, it was clear that Zuokas was a man who made things happen: creative, inventive, unorthodox, charming, and even whimsical: a man who scooted around town on a Segway, a man who sailed his boat on the Mediterranean, Adriatic, Baltic and North Seas. A man who opened the first McDonald's in Vilnius. A man who led plans for the historical preservation of Vilnius' Old Town. A man who spearheaded large scale projects of economic and cultural significance including the European Capital of Culture 2009 program, and the founding of the JMVAC, with its collection of Fluxus art.

So it was no surprise that when we found ourselves back in Vilnius this May for the launch of the Lithuanian Edition of Illegal Living. Zuokas was there, hosting in his SoHo T-shirt, as was Gintaras Sodeika, the new Director of the JMVAC and Rasa Razgaitis, Zuokas's assistant during his years as mayor, who is now the Project Manager for the JMVAC.

After the launch, which featured horn players and champagne and a cube sculpture of boxes of books in the middle of the gallery, I sat down with Zuokas (a three-term mayor) who is currently running for Parliament in the October 2016 elections and who served there previously from 2008-2009. Zuokas had something on his mind: the newest global trend -"where politicians are trying to act like stars. "Politicians are on the wrong path," Zuokas explained, "They are all trying to be heroes. They are always trying to have more likes on their Facebook site or more clicks on the Internet."

As an antidote to Donald Trump's show-biz theatrics, Zuokas believes that countries should focus on the economics of happiness. A recent visit to Bhutan where he met with local officials, reinforced this principle. "It is not only a measure of society's achievement, of how much money a nation has-- its GDP--"it is more appropriately a measure of how people feel." Even the UN has begun to assess this with their World Day of Happiness.

Why do Denmark, Norway, Holland, Finland and Sweden lead the globe in world happiness? Zuokas asks? The answer, he says, is partly due to their well-developed public services and their focus on long-term goals. But it is also because their government officials do not focus on themselves. There are, Zuokas said, many way to increase happiness.

One way is to do an analysis, when adopting a new law, to see how the new regulation will affect not just the economy but how people feel about it. If you increase GDP by cutting down a forest, will that make the people happy? Another example, if you bring in a foreign businesses, say from China, and Lithuanians become their labor force, will that increase their happiness.

A member of the Lithuanian Liberty Alliance, one of two liberal parties in the country, Zuokas wants his party to be to first to ask people, are you happy or not? To answer the question, though, he believes that people need education. "We have one of the lowest GDPs in the EU. Our median salary in Lithuania is 760 Euros including taxes a month, behind only Latvia and Poland. Among the 28 countries in the EU, Lithuania's GDP is 26th, only Bulgaria and Romania are behind us."

Zuokas, the magician, has several remedies up his sleeve. Different countries have different systems for paying politicians, he said. In Lithuania, for example, salaries are fixed and paid for by collecting enough taxes. Zuokas would like to change this model. Why not have salaries that are half fixed and half linked to real results? "Every year when the budget is approved, if everything has grown according to plans, politicians will get the other half of their salary. This goes for Mayors, too." The premium will be paid in the beginning of the next year, only after the country measures the national index of happiness. "It's not very different than tourist hotels," he said. "They are always surveying guests and asking how good is our services?"

Another area that Zuokas would like to transform is the attitude of young people in Lithuania who, perhaps as an inheritance from the Communist system, aspire to become public servants rather than to start their own businesses. "It is not trendy to do something by yourself. We need to motivate them," he said.

Beyond Lithuania, Zuokas believes that the happiness factor can have a major effect on global conflicts. Everywhere, in Russia, in the Middle East, in ISIS, even in America with its strange election campaign. "It's hard," he said "to see a person like Donald Trump as a candidate for president of a great country."
Zuokas believes that the reason for all of this conflict is "bad education, plus the fact that it is now fashionable to be powerful, to be aggressive, to have a gun in hand." As a first step, Zuokas's party is thinking about preparing a special book for the African continent where harmony is often illusive. "The idea is to present an integrated book for the younger generation which would help teachers in schools understand the value of peaceful neighborhoods. The goal would be to learn to live with differences."

Zuokas admits that Europe faces many dilemmas. "We need a strong, united Europe," he said, "based on the principle of our joint history. In Lithuania, we don't have many immigrants but we have agreed to receive 1200 and take care of them. Immigration is a big issue."

Admitting immigrants is not easy for Lithuania. "We are not a well-developed country to provide services." Zuokas would like to push bigger countries -the United States, France, Great Britain, even Germany, maybe less so. It's easy to send fighter jets to bomb countries but what comes after that? Tom Cruise, in the 2007 movie, Lions for Lambs, pushed Congress for hundreds of millions to finance fighting the Taliban in Afghanistan but, at the end of the film, Cruise came back to Congress and asked for $500,000 to build a school and they said no."

It has been an evolutionary process for Zuokas who introduced the idea of happiness in Vilnius in 2008. At the time, one component of the sharing economy, where citizens use government resources equally, was an orange bike-sharing system, which has since become one of the city's most valued modes of transportation. A May 2011 Public Service Announcement Don't Make Me Get the Tank! featured Mayor Zuokas riding over a Mercedes that was illegally parked in a bike lane.

Zuokas said that he was deeply influenced by one sentence of the Dalai Lama, who has visited Zuokas's home in the Uzupis neighborhood of Vilnius twice. "There doesn't exist a path to happiness," the Dalai Lama said. "The path is the happiness." 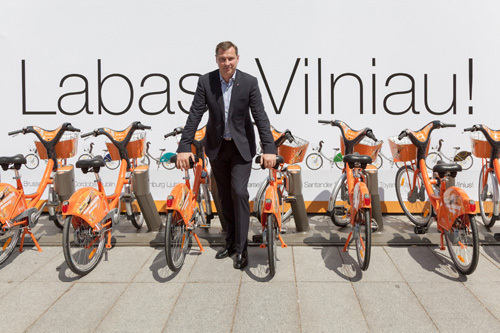 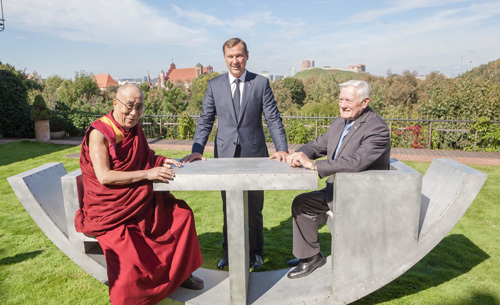 At home with the Dalai Lama and the former President of Lithuania, Valdas Adamkus. 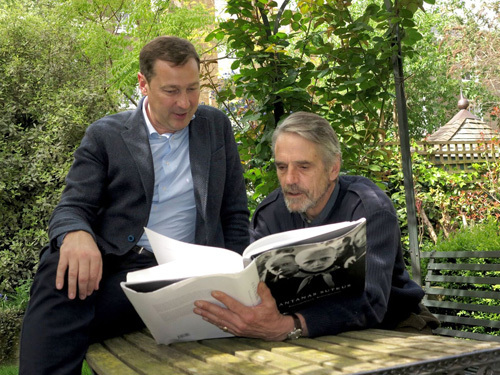 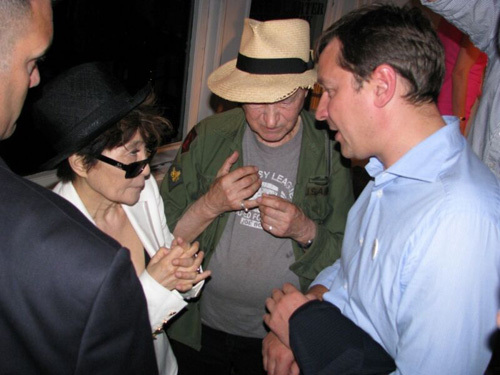 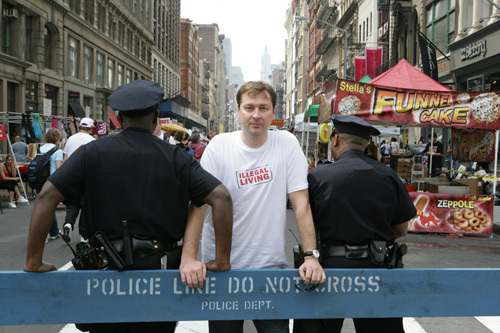 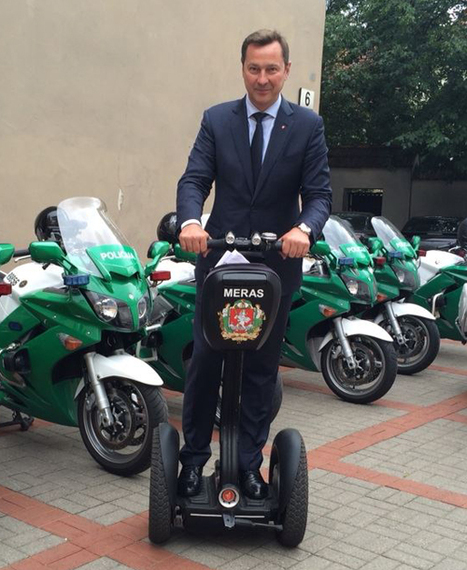 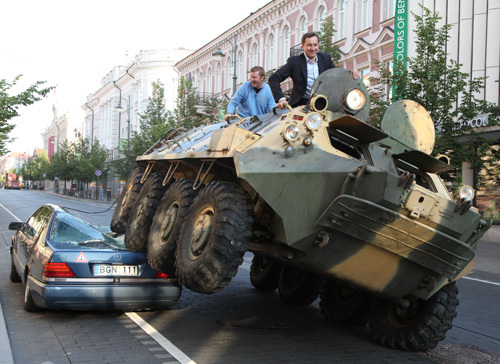