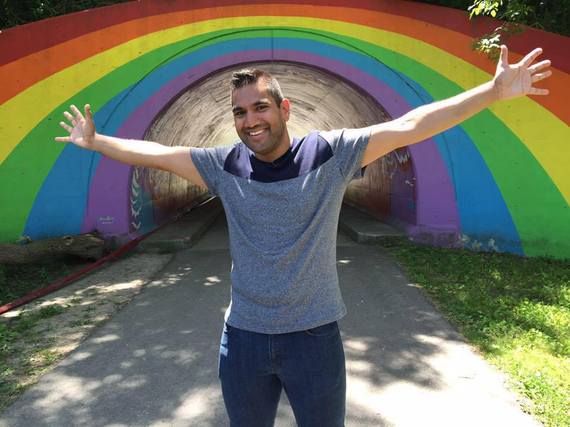 Originally published in the University of Toronto Magazine.

On June 12, a Muslim man named Omar Mateen shot and killed 49 people and injured 53 others in an LGBTQ nightclub in Orlando, Florida. From Toronto, there was not much I could do except condemn the shooter. But what was meant to be a simple gesture on social media made me the target of hate from hundreds of Muslims around the world. Such is the life of an openly gay Muslim.

"I'm sad you weren't in the club in Orlando," one man wrote in a tweet, adding at the end "Have a nice day" with a smiley. "Please get hit by a bus," another said. "I'll be among those to stone you to death," one Muslim tweeted. "Please prepare for hell," warned another politely.

As an openly gay Muslim, I am terrified of the Muslim community. As a Muslim, I know that acts of terror do not reflect Islam. With more than 1.6 billion Muslims on this planet, I know the vast majority of them are non-violent and peaceful just like me. As a gay man, I find no comfort in this fact because I know firsthand that hatred of LGBTQ people runs rampant within the Muslim community. Muslims cannot claim that Islam is the Religion of Peace if it is the Religion of Homophobia.

We cannot be both because to be the religion of homophobia means people die. Not just by the people that ISIS throws off the roofs of buildings, not just by people shot in cold blood by Muslims such as Omar Mateen, nor by the people hacked to death inside their homes. Muslims also kill people with the homophobia in their hearts and on their lips because that homophobia leads LGBTQ Muslims to hate themselves. This self-hate leads many to take their own lives. This is a truth that is all too familiar to me and nearly cost me my life.

Growing up, I found it was easy to deny that I was gay. My immigrant parents did their best to raise their children in line with their traditional Bangladeshi Muslim values. Pork, alcohol, even (heterosexual) dating were all forbidden. In high school, I dismissed my lack of interest in girls as me being a good and obedient son. Moving out for the first time, to be an undergrad at the University of Toronto, I tried to bring those traditional Muslim values with me to the dorm. This included the homophobia I learned from the Muslim community.

Moving onto campus was like entering the belly of the beast. Throughout the hallways were rainbow-coloured "positive space" stickers. I was disgusted. How could there be so many queers? Did they have no shame? Why did they have to be so open? What I did not know then, and what many Muslims still do not understand, is that being an LGBTQ person and being openly proud forces you to empathize. In the Muslim community, few people are brave enough to come out so most Muslims see LGBTQ issues as a distant "Western" problem. It's easy to hate in the abstract.

By being brought face-to-face with open and proud LGBTQ people, I had to choose between hate and love. I chose love. I chose love even when I did not love myself enough to accept that I was gay. I chose love because Allah has 99 names and bigotry, hate and homophobia are not among them -- but love is. Many Muslims are proud of their racial and religious identity even though openly embracing this identity can lead us to be targets of racism and Islamophobia. What many Muslims don't understand is that this same pride lives in the hearts of LGBTQ people even though we face homophobia, transphobia and biphobia.

Omar Mateen's act of terrorism shows us that being openly gay and proud can still cost us our lives. As a proud and openly gay Muslim, I know that I am a target within the Muslim community. Maybe one day it will cost me my life. But by being open and proud of who I am, Muslims are forced to choose. They must choose between loving me or hating me. If they choose love, they will see that both the gay community and the Muslim community have shared truths. Both believe that life is precious and both want to live in a world with tolerance.

And so I choose love. Because love wins.