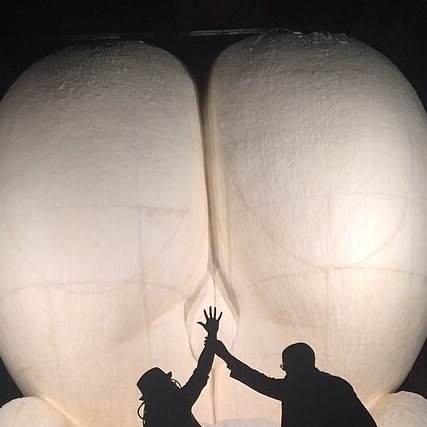 Because I am an "emerging" artist, I can say whatever I want. I am mercifully un-tethered to a gallery or institution (save for the Brooklyn Children's Museum, and there I can plead the 5th-year-old). This allows a great deal of freedom, especially (spellcheck: shape socially) if you have only your own mouth to feed. Or put through college. Clothe. House. And otherwise nurture (spellcheck: jut unsure). Fortunately, my black ass has been gifted with zero fucks and zero dependents (spellcheck: defendants), so I can fully articulate what I think about the sugar sphinx at Domino, or more generally, those tooted (spellcheck: rooted) up butts that have predominated our Facebook, Twitter and Instagram feeds -- damn, I live for composing on the iPhone --since the middle of 2013.

I already have an intimate relationship with Beyonecea's (Beyonce + Panacea) booty, courtesy (spellcheck: course tub) of that Visual Album™, and Miley has wrecked her flapjacks into my psyche (you can't un-see that extreme case of Noassatall®). And I'm kind of over it. If you're going to go the Venus Hottentot route, then you should just mine Saartjie Baartman directly. Then it would be clear that you aren't trying to simply rehash old material and pass it off as contemporary art, or plead the 5th wave pool of feminism (HAHAHA WIPEOUT!) A historic excavation can serve as a reminder that the illest (spellcheck: illegal) shit has already been done. A fine reference, but history's very nature renders it predictable. Not the finest quality for an artist, but certainly a marketable one.

I occasioned upon the Negress (spellcheck: merges) Kara Walker, at a yoga class in 2011 during a durational performance piece I was doing that curiously looked like couch surfing. We noticed each other during the downward dog (tooted up asses and all that) and after class we got all blackgirl and just ran our mouths for nearly an hour. It was pretty great especially (spellcheck: shape socially) since one of the seeds of my own artistic practice was planted by photocopying the entirety of Narratives of a Negress at the Los Angeles Public Library (circa 2003). It was a reference book. Pero, anyways, during that post yoga conversation, I did mention that hoped for a career that could also support a cottage industry of haters, #workingonit. I believe she might have chuckled, and, after the New York Times article profiling said durational performance piece -- courtesy of Penelope Greene and Simone Leigh -- I reached out to Negress Walker for insight, having been contacted by members of niggertati who had previously left my emails unanswered. It was a glorious peek into to the possibility of wealth through creative product. The midtown studio (with shower) was a succulent dream to one who has perfected the bath-in-a-bucket™. I can't remember much of that conversation -- other than her mentioning a severely born-again relative and the short lived sensation that I had arrived (spellcheck: aggravated).

I suppose that's the most accurate description of how I feel about the sugar sphinx: aggravated. I hold Negress Walker in such high (spellcheck: hug) esteem that my expectation for innovation is beyonce some sugar coated secks doll, though (spellcheck: thigh) I've enjoyed the various selfies that now proliferate my Instagram feed -- pussy lips and ass pucker.

Bottom line: I wonder what truly separates this work from antique postcards depicting unfortunate Darkies (spellcheck: drakes) as gator bait, made provocative by a contemporary context. I'm from Florida; black bodies been big business. My maternal grandparents met while he was cutting sugar cane and she worked in the mess hall (spellcheck: messy all). And so it continues, I guess. Black bodies. Big. Business. It's just all so appropriately legible that any writer from the New York Times or The New Yorker or some other reputable culture commentary source can easily tease out the bleached-from-brown-labor-industrial-feminine-slave-black-to-the-future-BDSM-ancient-Egypt-thang that Negress Walker has presented so palatably.

In 2010, Walker along with a number of collaborators, created a project that supported discussion (spellcheck: division), provided exhibition space and served as a meeting place for artists and writers and the curious. During one of these gatherings (BYOB), I was witness to a statement that Walker used as a description of her own practice. She said that her "work is a machete" and while I adore the mental picture of Negress Walker hacking through the muck, I don't quite believe it. And certainly not a machete that cuts away an underbrush to revolutionize the way we see the American history that she seems to be so intrigued by. In the words of Tunechi (spellcheck: tin echo) "ain't shit sweet, niggas on the streets like hookers". And so, the work has in fact become a motto, a summary of her intention that gets repeated so everybody knows 'what's up'. My friend's grandmother recently celebrated her 102nd birthday. She doesn't talk much, a condition of extreme age, and eats lots of candy. Apparently sweet stuff is the only thing we can really taste when our sensibilities atrophy.