Azzah Sultan, 20, has personally witnessed rampant Islamophobia since moving to America from her native Malaysia in 2013. The young Muslim artist arrived in New York City at the age of 16 to study fine arts at Parsons School of Design. Miles from her family and confronted by Americans' largely negative view of Islam, Sultan channelled her emotions into her art.

"I use art to express my feelings and frustrations toward society," Sultan told The Huffington Post.

For one of her most recent pieces, called "Home Sweet Home," Sultan posted callouts on Facebook, Tumblr and Instagram inviting Muslim women around the country to donate a red, white or blue headscarf to her project. She received scarves from all over the country, she said, and stitched them together to create an American flag.

Her hope with the piece was to show that "being a Muslim does not make one any less an American," Sultan told HuffPost.

“The act of me hand stitching these scarves together brought the different backgrounds and stories of these women into one piece," Sultan said. "This is a testimony of coming from various backgrounds but still sharing the common idea of being a Muslim and an American.”

Much of Sultan's work focuses on this intersection of identity for Muslim women. The media, and society at large, she believes, misrepresents Muslim women and labels them "as oppressed, naive, traditional, backward thinking, submissive, and the list goes on."

Her 2014 series "Am I Modern Now?" plays with these unfair labels by challenging the assumption that Muslim women, and particularly those who wear the hijab, are stuck in a bygone era.

For the three paintings that make up the series, Sultan borrowed styles from three famous Western modern artists -- Roy Lichtenstein, Jasper John and Andy Warhol -- to demonstrate "how absurd it is to tell a Muslim woman that she is only modern if she adopts Western ideals," Sultan told HuffPost.

Sultan dove further into the identities of Muslim women with her photographic series, "We Are Not The Same," which celebrates the diversity of their experiences and expressions. The project aims, as Sultan described on her website, to show that "although [Muslim women] do share the same faith we have our own interests, personalities, cultures, styles and hobbies."

Sultan will graduate from Parsons this spring and said she hopes to continue exhibiting her art before going on to graduate school.

"My ultimate goal, insha'Allah, is to own a gallery space where I can work with other Muslim and like-minded artists to create an environment where we can express ourselves through art," Sultan said.

PHOTO GALLERY
"We Are Not The Same" by Azzah Sultan
Download
Calling all HuffPost superfans!
Sign up for membership to become a founding member and help shape HuffPost's next chapter
Join HuffPost 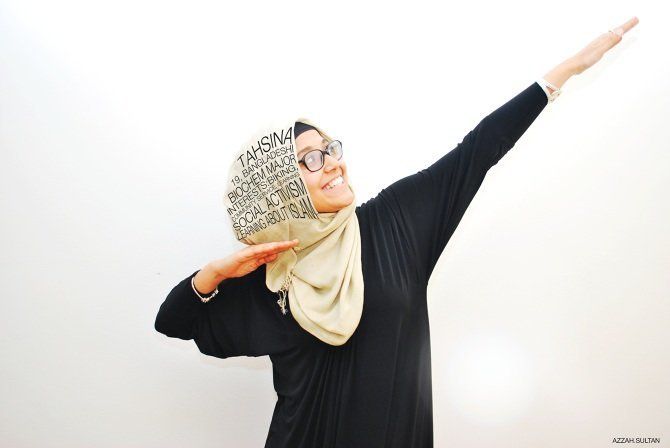