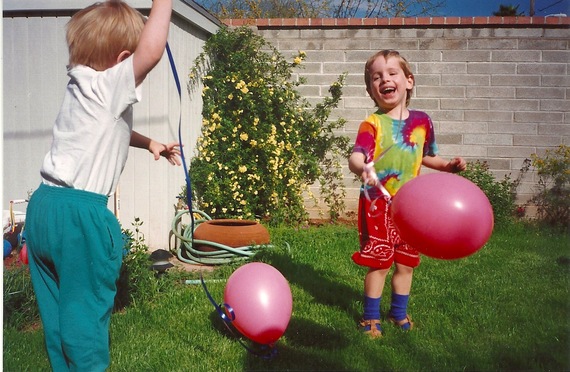 While I stripped sheets off the guest room bed upstairs, my 5-year-old son Harry and his friend Ryan played with the Hot Wheels Race Track set up on our living room floor. It was the toy Harry had wanted most for his birthday a few months before.

"Do you wanna play Barbies?" I heard Harry ask as I passed the two boys on my way downstairs to the laundry.

"You can be Jasmine," Harry replied with a hint of enticement.

I thought it was cute that Harry knew Ryan preferred the only dark-haired princess among his bevy of blondes.

"You guys?" I called after them. "Can you please bring the Barbies outside? It's such a beautiful day, and I want to do some gardening in the backyard."

The boys' Barbie drama that afternoon involved volcanoes and bubbling pools of hot lava. I had to keep from laughing at some of their voices and dialogue.

After an hour of clearing leaves from the garden beds of raspberry bushes and perennials, I was surprised to see Ryan's dad appear at the top of the driveway in a suit and tie. I waved hello, and he smiled back.

Ryan turned from the wrought-iron chair that doubled as a volcano to face his dad, Jasmine Barbie in hand. The grin on Ryan's dad's face disappeared, and he shot me a glaring look.

"You're early," I said, hopeful to change the mood. "Must be nice."

Ryan looked up at his father, and a tiny wrinkle of worry appeared between his eyebrows. His dad was not happy, and it was clear Ryan didn't know why. My pulse accelerated. I felt uncomfortable witnessing this scene.

Ryan's dad had cast a look of disapproval my way, too, that implied playing Barbies at our house was bad for his son.

"What's wrong with playing Barbies?" I wanted to ask. But I held back; I didn't think challenging Ryan's dad in front of our kids was a good idea. Later, I imagined him at home telling his wife he didn't want Ryan playing at Harry's house anymore, as if playing with dolls was bad for Ryan's developing masculinity.

I felt sorry for Ryan's dad. Rather than view dolls as figures for imaginative play, he had divided toys by gender. It was obvious he thought dolls were only for girls. But what he'd missed out on in the hour before he arrived was Ryan's happiness creating scenes of danger, disaster and rescue. And here's the thing about happiness: it triggers motivation, creativity and productivity. And who wouldn't want that for their child?

If I ever run into Ryan's dad, I want to ask if he'd still be so quick to have Ryan drop the Jasmine Barbie. I'm hopeful he's evolved enough these past 20 years to believe that all kids deserve the freedom to play with whatever toy it is that makes them happy.