Beyoncé landed at the top of the TIME 100, TIME Magazine's annual list most influential people. Hailed as the first "Titan" mentioned and the issue's cover star, Beyoncé was lauded for breaking all the rules in the music biz and championing women's rights to lead.

In keeping with TIME's tradition of casting cultural icons to write affectionate blurbs about the honorees, LeanIn.org founder Sheryl Sandberg wrote the ode to Beyoncé. "Beyoncé doesn’t just sit at the table. She builds a better one," she wrote.

Beyoncé's whirlwind 2013 centered around dropping her self-titled LP in complete secrecy in December. She ran a sold out Mrs. Carter Show world tour, was a full-time mom and became the leading voice in support of women in pop culture and music. "Her answer to the question, What would you do if you weren’t afraid? appears to be 'Watch me. I’m about to do it,'" Sandberg wrote. "Then she adds, 'You can, too.'"

Her husband Jay Z was labeled a "Titan" last year and former New York City mayor Michael Bloomberg sang his praises, adding, "He even put a ring on Beyoncé." The couple is set to continue music domination and will embark on a major summer tour together, the Mr. And Mrs. Carter Tour.

Bey also nabbed a spot on the list last year, where she was then labeled as an "Icon." In the article written by director Baz Lurhmann, he complimented her work ethic and warmth. "When Beyoncé does an album, when Beyoncé sings a song, when Beyoncé does anything, it’s an event, and it’s broadly influential," he wrote. "Right now, she is the heir-­apparent diva of the USA -- the reigning national voice."

Only a year later and Beyoncé is no one's heir-apparent. She's pop music's queen. 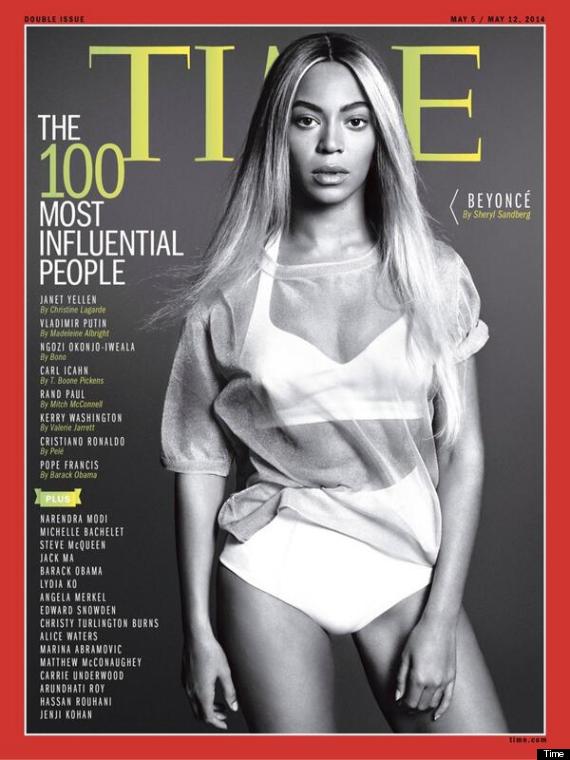