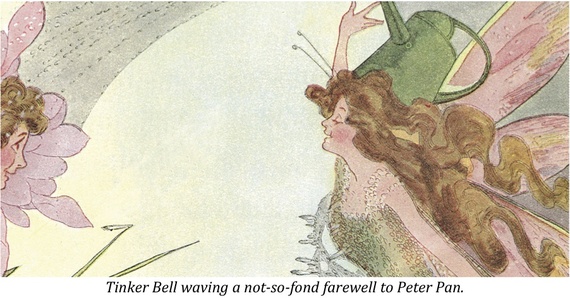 Sources close to Tinker Bell report long-brewing tensions between her and Peter Pan came to a head when she told him, "Grow up already. The eternal-boy shit is getting old." The source could not say if the pun was intended, but did confirm Ms. Bell has cut all ties with her long-time pal and left Neverland for a fresh start in Pixie Hollow.

Tinker Bell told the source, "He refuses to grow up. At first his boastful carelessness was fun and refreshing. I admired his confidence and eccentricity--you know, like gallivanting about in a cobweb-and-leaf toga. But he can't get into a club with a dress code. He can't get a job and pay for his own damn beers. It went from charming to annoying to downright embarrassing. Seriously, would it kill him to wear pants once every three-six-five."

"And it's not like he doesn't have choices or potential," She added. "He can fly. He can imagine things into existence, for chrissake. These are bankable skills. But instead he's another lost boy, vaping pixie dust all day, waving his sword all night...like life was one big Judd Apatow movie--where, not for nothin', even Seth Rogen would grow up by the end...sorta."

Image: "April Wakes" illustration by M.T. Ross, 1914, from A Year with the Fairies by Anna M. Scott. Public domain via Wikimedia Commons