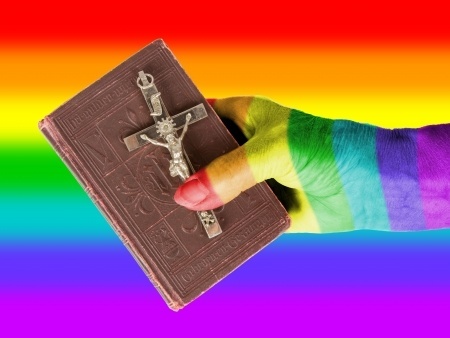 This week's Supreme Court debates about the definition of marriage echo the same debates that have been dominant in communities and states across the country for the past several years. Justice Kennedy, who appears conflicted about where he stands on this issue, expressed his concern about changing a conception of marriage that "has persisted for thousands of years."

In truth, like most social institutions, the institution of marriage has shifted and changed over the years in ways that have strengthened it and made it both more accessible and more just.

In 1967, the Loving v. Virginia ruling eradicated state laws prohibiting interracial marriage and thus transformed the institution of marriage yet again, in ways that struck down discriminatory state laws in much the same way that a ruling in the current case might do.

That ruling read, in part, "Marriage is one of the "basic civil rights of man [sic]," fundamental to our very existence and survival . . .To deny this fundamental freedom on so unsupportable a basis as the racial classifications embodied in these statutes . . . is surely to deprive the State's citizens of liberty without due process of law."

Even more recently, we have debated no-fault divorce, marital rape laws, and now marriage equality. In each of these cases where we have debated about the nature of the institution of marriage, we have shifted and expanded our understanding in ways that moved us a little closer toward justice in our society.

Unfortunately, these folks must have stopped reading their Bibles at the end of Genesis, chapter two. Even a cursory read of the Hebrew Bible/Old Testament demonstrates that marriage was not understood or practiced in any way related to the modern idealism we have superimposed on this text.

Marriage in the Bible was much more about property rights, ensuring paternity of offspring, succession, political alliances and tribal stability than it was about companionship, mutual support and affection as we think of marriage today. The patriarchs of the Jewish and Christian tradition often had sex with multiple women, usually, but not always, for the purpose of procreation. Many of the women in the Bible who were slaves, or servants, or handmaids were reportedly "given" by the legal or primary wife to her husband for the purposes of securing children. The notion of consent, particularly for women, in matters of marriage or sexual intercourse is not a relevant moral norm in most of scripture.

Wives could "give" their female slaves to their husbands for the purpose of sexual intercourse either as co-wives in polygamous marriages or as concubines. Concubines were women engaged in sexual relationships with men whom they did not marry. Both of these practices are commonplace in the Bible. Sarah is reported to have "given" her maid servant, Hagar, to Abraham "as a wife" so that God's promise of offspring could be fulfilled (Gen. 16:3). Other notorious polygamous marriages in the Hebrew Bible include Esau, Moses, Jacob, Gideon, David and Solomon who reportedly had 600 wives and 300 concubines!

Many prominent Biblical patriarachs had concubines, often in addition to their wives. Perhaps the most notorious concubine is the unnamed woman of Judges 19 who belonged to a Levite. She was offered up to a hostile crowd of ruffians to save the Levite man from harm. The crowd gang-raped her and upon returning to their home, the Levite cut her body into twelve pieces and sent the pieces out to the tribes of Israel as a warning of the depravity of the current age. No better example exists of how cultural context defines moral norms than the fact that this passage purports to tell the story of the moral breech of the code of hospitality that resulted in the attack on the Levite rather than the horror of a man offering up his sexual partner (or common-law wife) to be gang-raped all night to the point of death and then to cut her body into pieces to serve as a warning to his kinfolk.

And don't get me started on Jesus' thoughts on marriage! He encouraged people to leave their wives, children, parents and families in order to follow him (Lk 18:28-30); encouraged followers to reject their families (Lk 14:26); and challenged conventional notions of family (Mt 10:34-39, not to mention prohibiting divorce (Mk 10: 10-12).

The truth of the scripture is in its enduring message of justice and love as moral norms for humankind, marriage equality is surely an fitting expression both of these norms.