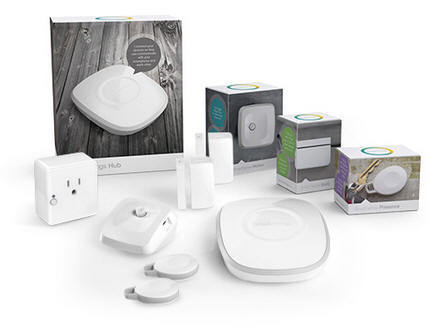 Samsung, according to TechCrunch, is in talks to buy home automation company SmartThings for $200 million. As of my deadline, the deal hadn't been confirmed, but if it goes through, it would put the giant Korean electronics company in direct competition with Apple and Google.

But even if this deal doesn't pan out, you can be sure that Samsung -- along with just about every other consumer electronics company -- will be entering this market.

Although technically the term "home automation" could apply to any labor-saving device, including dishwashers and washing machines, in today's world it means remote control and monitoring of home appliances, lights, doors, security and entertainment systems.

For example, SmartThings sells a $99 hub that connects devices to the Internet so that they can be controlled from your smartphone via a cloud-based service. They also sell a $49 Multi Sensor that can detect the temperature and when "things" (such as doors, drawers or even objects) are opened, closed, moved or change angles. You could place the sensor near your front door to know if it's been opened, which not only helps detect an intruder, but also can let a working parent know that their kid is home from school. The software can even be used to send you an alert if the child hasn't come home by a certain time. You could also use it to monitor if windows have been opened or if someone left the garage door open.

Because these devices are wireless, they're relatively easy to install and, unlike home monitoring services, there are no monthly fees to pay.

The company's website has an amusing video showing how a customer uses his voice to turn on the coffee pot. You can also program the doors to lock as soon as you leave the house or turn on the air conditioner from work so the house is cool when you get home.

There is almost no end to what you can automate using technologies not just from SmartThings, but also from Belkin, Wink (sold at Home Depot) and other companies. Nest, which was purchased by Google* this year for $3.2 billion, currently, makes a "smart" thermostat and smoke and carbon dioxide detector that you can control with your voice or your smartphone. The company hasn't announced other products but, based on Nest CEO Tony Fadell's presentation at the Re/code conference last month, it's pretty clear that they have ambitious plans.

Privacy advocates have expressed concern about Google having access to information collected by Nest devices in people's homes. But in a blog posted at the time of the acquisition, Nest implied that it would never share data with the rest of Google. "Our privacy policy clearly limits the use of customer information to providing and improving Nest's products and services," the blog said. "We've always taken privacy seriously and this will not change."

Still, whether the technology is from Google or any other company, connecting our homes to the so-called "Internet of things" does raise some interesting privacy and security issues.

Apple, too, is jumping into home automation. Its iPhone, iPad and even its iPod touch media player have long been used as controllers for other companies' home automation products. Just about every company in this space has an iOS app along with an Android app to control its products. But at its Worldwide Developers Conference conference last month, Apple announced Home Kit, which is a set of tools to help developers create home automation apps for Apple devices. The technology allows for developers to create apps that share customer data with apps from other developers, assuming it's OK with the customer.

That means any Home Kit app can interact with any other compatible Home Kit device in your home. So your coffee pot and your dishwasher could carry on a conversation, even if they are controlled by devices from different companies. That begs the question of what they would talk about (Maybe the coffee maker would tell the dishwasher that it's time to wash your coffee cup).

While smartphone integration is relatively new to the home automation landscape, there is nothing new about devices that can be remotely controlled from within or even from outside the house. Twenty years ago, I was using X10 devices to control lamps, fans and other devices throughout my home. It wasn't a wireless technology exactly, but sent data through the house's electrical wires to any plugged-in device, so there was no need to string additional wires

I am excited about the developments in home automation and look forward to installing some relatively simple but useful things, like a garage door monitor and electronic house locks that let you lock and unlock the door from a phone or program a code to let workers into the house during a specific period of time.

But there are still some tasks that will require old-fashioned manual labor for the foreseeable future. We have machines to wash and dry our dishes and clothes but, until robots get a lot better, it still takes a human to clear the table, put away the dishes and fold clean laundry.

This post first appeared in the San Jose Mercury News