The epidemic of kidney disease in the Black community has many stories to tell.

Black Americans experience three times the risk of developing kidney failure as compared to the White population. Diabetes and hypertension remain the most common causes of end stage kidney failure. The ultimate treatment for end stage kidney disease is kidney transplantation. Home hemodialysis has been shown to improve the likelihood for kidney transplantation but unfortunately, on a national level, Black Americans are 51 percent less likely than average to receive home hemodialysis treatment. 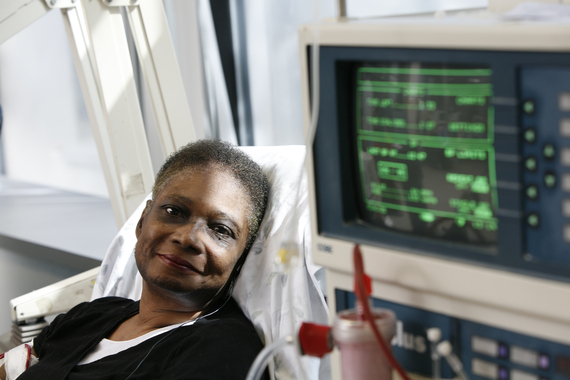 David is a 24-year-old musician diagnosed with kidney failure. He found out he would need dialysis treatments in order to stay alive unless he received a kidney transplant. It seemed that in-center dialysis was the only option that was offered to him, but he hated it. It was an extremely depressing experience for him. An older patient who treated him like family didn't show up one day and he heard that she had died. After a year of in-center hemodialysis with restrictive fluid intake, restrictive diet and regimented life-style, he was offered the once-in-a-lifetime opportunity to travel on a 40-city tour with a famous performer. It wasn't until his manager, Manny, researched home dialysis that he found out about portable home hemodialysis (HHD). It was the first glimpse of hope David had in over a year. His friends found a home training center and he quickly learned how to do his own treatments. He brought portable home hemodialysis machine with him on the tour bus and was able to perform his treatments as prescribed. David was also able to improve his health while doing his own treatments and lost more than 100 pounds. His weight had been an obstacle to getting on the transplant list. With the weight loss and better health, he became a candidate for a transplant and was placed on the transplant list. In 2010, he underwent a successful transplant surgery and now lives free of dialysis treatments.

Laurie is a young woman with kidney failure. She had been on in-center hemodialysis but the treatment made her incredibly tired. She was not able to work or enjoy her regular activities on dialysis days. Her dialysis schedule was three days per week and she became very depressed with each treatment. After three weeks, her husband, Michael, was identified as a donor and she received her transplant. Unfortunately, her systemic lupus caused her kidney transplant to fail. She braced dialysis once again but the same problems returned. After some research, Laurie found out about home hemodialysis. She tried the new treatment, and after only a few days, she felt drastically better. She knew it was worth the effort to be trained to do her own treatments. Within the first couple of weeks, she felt like her old self again and was even able to stop all of her blood pressure medications. As a result of her improved health and doing the treatments on her time she was able to continue her business and work full-time. In part, because of the clinical benefits of HHD, she was able to get back on the transplant list. She now has a second kidney transplant.

These stories are not uncommon. Learning to care for yourself and return to full-time life can be a very uplifting experience. If you have kidney failure and want a better life, HHD can lead to improved feelings of well-being and ultimately to a successful kidney transplant.

Talk to your nephrologist about options available for treatment of kidney failure, including HHD and other forms of home dialysis therapies. You can watch this video about hemodialysis at home. For more information, visit the National Kidney Foundation.

Spokesperson for the National Kidney Foundation

What's An Aortic Aneurysm? Here Are The Causes And The Signs Of One.

The Top 10 Trending Recipe Searches Of 2022, According To Google