INTO THE WILD is not simply a spectacular moment in rock history. It is a bottled message of a crucial rebirth for rock, with powerful political messages seamlessly woven into an elegantly embodied handcrafted aesthetic..

"We have nothing to be quiet about": Tobias Jundt on stage in Berlin enacting a epic mythology as old as creation and as new as the Age of Aquarius: the life/death/rebirth of the eternal return. (photo by LPS)

The 3.0 aesthetic takes form/forum in the Brooklyn/Berlin marriage between Bonaparte and new collaborator Tim Fite at Huxley's Neue Welt in Berlin. 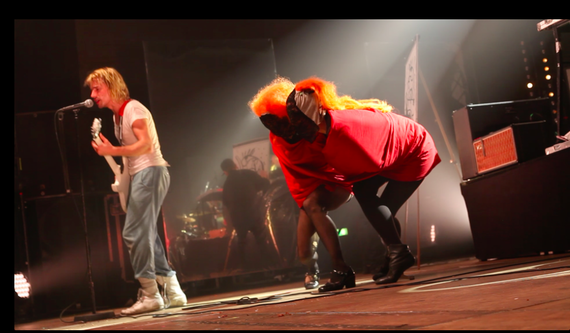 Tobias Jundt's rock star ascent via an entanglement with a grounded force: the Brooklyn artist/rapper Tim Fite (drawing onstage above) also served as the one-man band warm up, opening his act with "CLAP"--signature handdrawn placards announcing a neo-modernist audience interaction with the handworked image, the digital simulacrum and hand-generated sound.

Back in his home turf in a European tour that began three weeks earlier, Jundt gave new meaning to crowd surfing as a sacrificial rite. 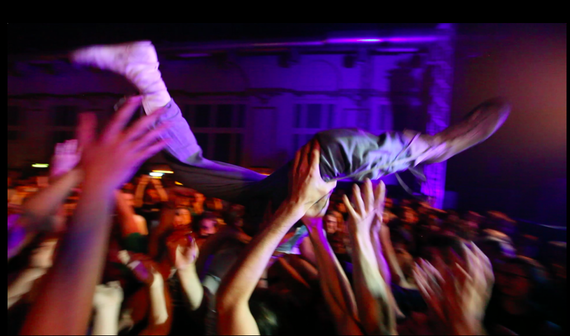 After shedding the skins of a seven-year Berlin incubation, Jundt dives into the collapsing quantum wave initiating the 3.0 era.

The second headlong plunge produced a sacrifice from the crowd of adoring fans... 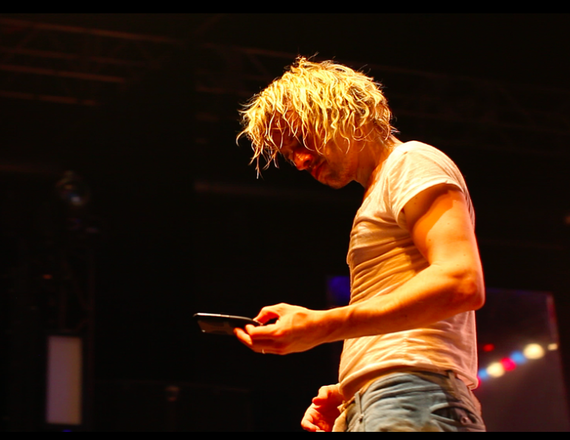 Jundt gazed at the object tossed up by the wave before handing it back, a seemingly spontaneous gesture of 3.0 self-reflecting entanglement between a newly arisen icon and the collective. 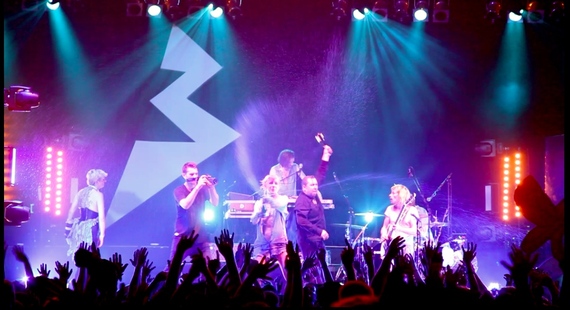 ME SO SELFIE provided visual evidence, in Fite's raised hand, of the "sacred marriage" between the hand-crafted and technology in a tertiary mythology: homo generator of arificial life.

The four-fold set mirroring of the crowd sealed the 3.0 aesthetic... (photo by LPS) 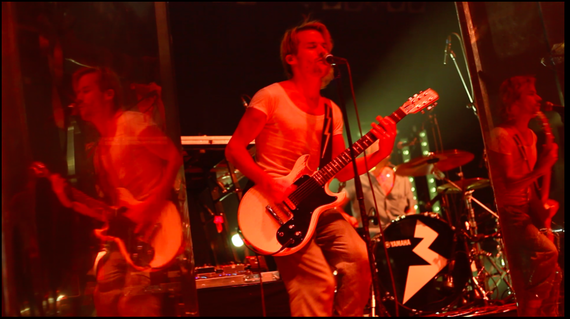 ...within the the magic of the Third: Tobias Jundt of Bonaparte embodying the arising icon as the Self generated by self-reflection..

Shorn of his leo headgear, along with other past guises/disguises, Jundt dramatically appeared in the mirror opening (the icon is US!) before the Bonaparte logo. (photo by LPS)

The Bonaparte handmade symbol reflects the 13 constellation of Ophiuchus, a combination of heaven/lightening and earth/serpent, the creative genius that has made this Berlin collaborative a force for global transformation.

The band's signature style has transformed the dark matter of the old favorite gone viral the 2008 prescient Anti-Anti into rock genius with its new songs. 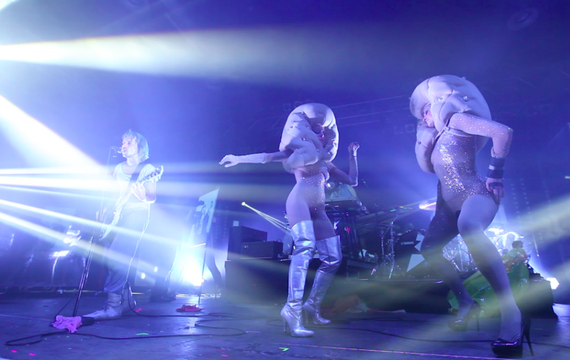 The golden art-I-fact of the Bonaparte transformation through the years of Berlin experiments, the self-contained narratives blending hard and soft to "Into the Wild" and "Riot in my Head" hit just the right notes, on every level, for a collective conversion as pathway out of the binary (the after-postmodern) and into the tertiary. 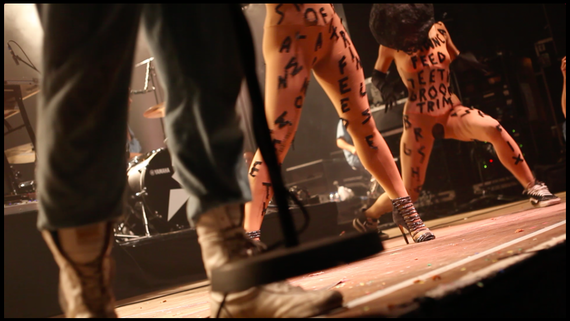 ...written on the body, made literal here with Wash Your Thighs.

The self-created art-I-fact as the homo generator political message of the 2010 Boycott Everything ("I boycott everything that is not made by my hand") taking visual form in the finale which celebated the Bonaparte/Fite brave new world with champagne splayed into the crowd...

Death of dollar and rebirth of US in the economy of a single image: Fite, entering into his own smartphone cutout, enacts his 2014 iBeenHACKED condemnation of the Web 2.0 "Like" binary with his handcrafted response to Bonaparte 2010 "Boycott Everything".

The anthems, together on stage for the first time, declare a movement for the return of the handcrafted within the context of the quest for epic narrative declared as a new tertiary myth in Dr. Peggy Bloomer's Surfgeist: Epic Narratives in New Media

In a seamless web between sound, words and image--from Fite's handcrafted animals to the handmade costumes--"Into the Wild" has an unprecidented clarity about the Kundalini power of transformation with the spirit of a new science of quantum entanglement. (photo by LPS)

...that, at last, gives visual expression to the invisible dark energy as the primal force of rock.

Lisa Paul Streitfeld, a critic and philosopher living in Berlin, is editor of Dr. Bloomer's forthcoming Surfgeist: Epic Narratives in New Media and author of Hermeneutics of New Modernism, about a new philosphy coming out of the Schirmacher laboratory in Saas Fee, Switzerland. Both books are being published this month by Atropos Press.