December sunshine pours into the fifth floor office of the young charity Boroume (We Can), just off Monastiraki Square in the heart of Athens. But the atmosphere would be cheerful even on a gloomy day. Though faced with heart-rending cries for help 24/7, Xenia Papastavrou and her team can't suppress their elation at the way these pleas are being met.

Last February when I interviewed Papastavrou in a suburban café, her fledging organization dedicated to "Saving Lives by Saving Food" was working with 218 institutions from bakeries, supermarkets, and fast-food chains to old age homes, orphanages, church organizations, and municipal services, mostly in Greater Athens. Now, just nine months later, Boroume has acquired NGO status, its own office, and the list of member institutions has grown to more than 600.

"Getting companies to donate makes our impact much larger," says Papastavrou, a 30-something former journalist and mother of two boys, "but we still deal with individuals too. What's changing is the mentality, the desire to help seems to be growing even as our 'crisis' is deepening."

What began in May 2011 as an attempt to link agencies and people who needed food with producers and shopkeepers who trashed it at the end of the day has burgeoned into a flourishing network that operates all over Greece and has donors throughout Europe and North America.

We're in the business of coordinating the haves with the have nots. Once we set up the connection, we can step back and let the organizations continue on their own. But we don't stop with food exchanges. We seem to have become a clearing house for all sorts of other things, from furniture and appliances to clothes, teachers, cooks, and toys. Sometimes we do get offers we don't know what to do with though. Such as the woman who wanted to donate some food along with her wedding dress!

As we talk, Papastavrou asks the two assistants present, Tatiana Moulouli and Boroume partner, Alexia Moatsou, to join the conversation when they are not handling distress calls on the phone. One success story follows another, so quickly I can barely keep up. 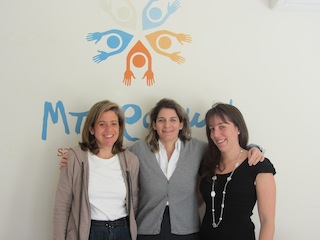 They tell me about the 670 euros raised from a christening (in lieu of baby presents) that will go towards buying meat for the Penelopeiou orphanage; the Greek-Canadian woman who sends $300 a month because "she knows what it's like to be poor"; the catering firm that donates apples and salads to a school for handicapped kids; the Niarchos Foundation that pays Boroume's running costs and the Swiss couple who travelled to Greece to see how they could help and wound up funding 18 months' rent; the 3000 Christmas baskets offered by the A/B supermarket chain to impoverished families all over Greece; and the 10,000 bags of flour and 5000 packets of cookies given by the Allatini company... just to give you an idea.

Amidst the many tales of generosity, one in particular stands out. I had seen the announcement on Facebook (where Boroume has 7,500 followers): "For a public school in Piraeus, three slices of bread, sugar and milk wanted for 40 children with special needs." The request seemed so pathetic that Papastavrou and some of her team paid the place a visit.

"They hadn't realized they could ask for more," says Papastavrou. "When we got there, we started asking what else they needed and slowly they admitted that the children came from families too poor to feed them at home or even wash their clothes. They didn't even have soap and were doing the laundry by hand."

When we circulated our appeal for help, Tatiana was so besieged by calls she was answering two at a time. By the very next day, the school received a used washing machine and in no time, they had so much food they are able to feed their kids two meals a day at school. In addition, the parents and teachers have set up their own grocery store at the school, stocked with a year's supplies, and backed by 3,340 gift vouchers for supermarkets bought with donations from abroad.

Tatiana interrupts the tale, eyes shining with enthusiasm. "This is what I love about working here. We bring out what's best in people, not just food. And simply by word of mouth."

The phone rings and her smile vanishes. "That was a woman in Patras, asking us how she can help her retarded, mentally ill teenager who refuses to have anything to do with his family. She was obviously struggling not to break down. "

"We can usually find the answer, by now we have so many contacts," says Papastavrou.

The conversation switches to Christmas plans. There's a woman who wants to create a Facebook event, cooking with virtual and real friends for 100 to 200 families, enough to last a few days. The Hilton Hotel is offering to cook with 20 kids and give them lunch on Christmas day. A woman on the Town Council in a small city in Germany is organizing its kindergartens to send presents to children in Greece.

And so it goes. Every day brings challenges and unexpected offers of help.

We're just putting them together and people are responding, learning to give discreetly. It's magical to watch their power evolve.

As I get up to leave, Tatiana says, "Let's put Obama on the tree."

A real fir in a pot by the door is still undecorated. But Obama?

The president turns out to be a stuffed brown puppydog.

"We've called it Obama because everyone asks us whether we got our slogan from him," explains Papastavrou. "Boroume means 'Yes we can.' I didn't make the connection at the time, but why not? Now he's our mascot."

Back on the street, there are few signs of crisis until I come to the Monastiraki metro stop, where three men are tucked into blankets under the arcade. I'm happy to see each has about three. Here in Greece miserable statistics bombard us every day: at least 1.2 million people are unemployed, 27.7 percent of the population or 3.03 million were below the poverty line in 2010, no one even keeps track of the growing numbers of homeless or of the young people who are leaving the country.

But I will try to keep my sights on Boroume's statistics, on the rising numbers of people and institutions helping and being helped by this dedicated team and its volunteers. Every time I feel blue, I will pop into their offices at 2 Kairis Street for a dose of optimism.

For background on this story, visit their website, which has information in English as well as Greek, or become a follower on Facebook.