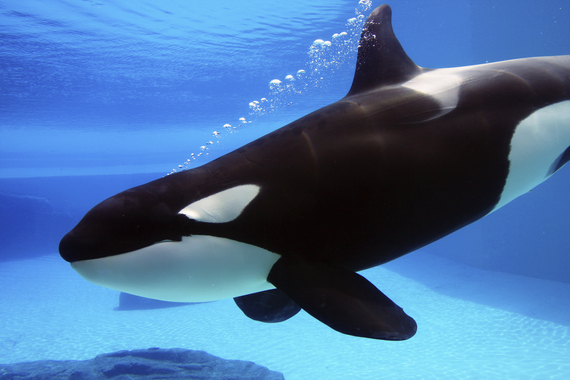 In a sign that the humane economy is an unyielding force, exerting its influence on companies in all sectors of commerce, SeaWorld announced in cooperation with The HSUS today that it will end all breeding of its orcas and it won't obtain additional orcas from other sources -- policies sought by animal advocates for many decades.

The company also announced, after negotiations with The HSUS, that it would phase out its theatrical orca shows in favor of orca exhibits that highlight the whales' natural behaviors, and have no orcas at all in any new parks around the world -- the remaining orcas will be the last generation housed at SeaWorld. The company has also agreed to redouble its efforts to conduct rescue and rehabilitation for a wide variety of marine creatures in distress; join The HSUS in our advocacy campaigns against commercial whaling, sealing, shark finning, and other cruelties; and revamp food policies at all of its parks for 20 million visitors.

It's a momentous announcement, and it comes almost exactly a year after Ringling Bros. agreed to phase out its elephant acts in traveling circuses. SeaWorld has pledged to invest at least $50 million over the next five years for the rescue and rehabilitation of marine animals and on advocacy campaigns -- a major boost to our movement in helping marine animals in crisis.

In my forthcoming book, The Humane Economy: How Innovators and Enlightened Consumers Are Transforming the Lives of Animals, I wrote about SeaWorld in a chapter on the use of animals in film and television, in the circus, and in marine parks. I noted the revolutionary changes in the film industry where more and more producers and directors are embracing computer-generated imagery as an alternative to using live animals, and I recounted the decades-long campaign to bring pressure to bear on Ringling Bros. to end its elephant acts. In my discussion of SeaWorld, I forecast that its business model would have to change -- that there was an inevitability to the shift in its operations due to consumer demand.

Little did I know when I turned in my manuscript in December that I'd soon be meeting with the new CEO of SeaWorld and launching discussions with him about the future direction of the company. And little did I expect that our two organizations would together make a landmark announcement before the book made it into bookstores.

The humane economy can move at lightning speed, and hit with full force. The world is waking up to the needs of all animals, and the smartest CEOs don't resist the change. They hitch a ride on it and harness the momentum.

Joel Manby, SeaWorld's CEO, is banking on the premise that the American public will come to SeaWorld's parks in larger numbers if he joins our cause instead of resisting it, and if SeaWorld is a change agent for the good of animals. He's exactly right, and I give him tremendous credit for his foresight.

As I wrote in The Humane Economy, the film Blackfish proved to be extraordinary in the annals of documentary filmmaking. It is exceedingly rare for an advocacy film to get a long run, and even rarer for it to get tens of millions of viewers, as Blackfish did, thanks to serial rebroadcasting by CNN. Director Gabriela Cowperthwaite changed the dynamics of this debate overnight with her potent film, following closely on the heels of David Kirby's Death at SeaWorld, featuring my former colleague and orca scientist Naomi Rose. That book offered a hard-hitting critique of the history and operations of the company.

During my discussions with Manby, I was clear that the agreement we forged should deal with all animals -- not just orcas. That's why this announcement not only promises more help for manatees, sea lions, and other marine creatures in distress, but it also connects consumers to these issues through their diets. Starting soon, all SeaWorld food offerings will be cage-free for eggs and gestation-crate-free for pork, all seafood will be more sustainably sourced, and there will be more vegetarian and vegan options.

While the remaining captive orcas will live out their lives at SeaWorld, the company is phasing out theatrical performances at its three parks in San Diego, San Antonio, and Orlando, and spectators will instead see orca enrichment and exercise activities. In a nutshell, this is essentially an end to orca shows, with no orca breeding, no orcas at any new parks, and, during the transition period, a better environment for the remaining whales.

SeaWorld and The HSUS still have some disagreements. But we've found an important set of issues to agree upon. The sunsetting of orcas in captivity is a game changer for our movement, one that's been a long time coming, and one that is only possible because of your advocacy and participation. I am immensely excited about this announcement and I hope you are too. Please sign here to show your support and share the news.