It sounds like a mash-up of Indiana Jones' plots, but German researchers say a heavy Buddha statue brought to Europe by the Nazis was carved from a meteorite that likely fell 10,000 years ago along the Siberia-Mongolia border.

This space Buddha, also known as "iron man" to the researchers, is of unknown age, though the best estimates date the statue to sometime between the eighth and 10th centuries. The carving depicts a man, probably a Buddhist god, perched with his legs tucked in, holding something in his left hand. On his chest is a Buddhist swastika, a symbol of luck that was later co-opted by the Nazi party of Germany.

"One can speculate whether the swastika symbol on the statue was a potential motivation to displace the 'iron man' meteorite artifact to Germany," the researchers wrote online Sept. 14 in the journal Meteoritics & Planetary Science.

The iron man first came to Germany after a 1938-1939 Tibet expedition by zoologist and ethnology Ernst Schäfer, who was sent to the region by the Nazi party to find the roots of Aryan origin. The statue then passed into the hands of a private owner. [Fallen Stars: A Gallery of Famous Meteorites]

Stuttgart University researcher Elmar Bucher and his colleagues first analyzed the statue in 2007, when the owner allowed them to take five miniscule samples of it. In 2009, the team had the opportunity to take larger samples from the inside of the statue, which is less prone to contamination by weathering or human handling than the outside where the initial samples were taken.

They found that the statue is carved from a rare class of space rocks known as ataxite meteorites. These mostly iron meteorites have a high level of nickel. The largest-ever known meteorite, the Hoba meteorite of Namibia, is an ataxite meteorite that may weigh more than 60 tons.

It came from outer space

A chemical analysis of the iron man samples revealed they are a close match for a famous scattering of space rocks from the Siberia and Mongolian border. The Chinga meteorite field holds at least 250 meteorite fragments, most relatively small, though two topping 22 pounds (10 kg) have been found there. Scientists estimate the Chinga meteorite fell 10,000 to 20,000 years ago. The field's first discovery was recorded in 1913, but the statue's existence suggests people were mining the field for artistic materials long before that, Buchner said. 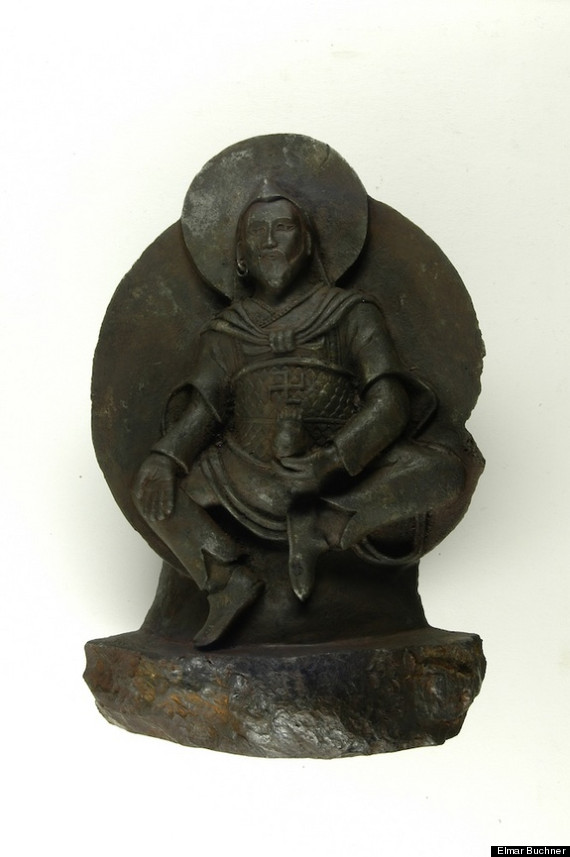 The Buddha meteorite matches those found in the Chinga meteorite field.

The identity of the carved man is unclear, but the researchers suspect he may be the Buddhist god Vaisravana, also known as Jambhala. Vaisravana is the god of wealth or war, and he is often portrayed holding a lemon (a symbol of wealth) or moneybag in his hand. The iron man holds an unidentified object in his hand. The statue is about 9.5 inches (24 cm) tall and weighs about 23 pounds (10.6 kg).

Many cultures used meteorite iron to make daggers and even jewelry, Buchner and his colleagues wrote, and meteorite worship is common among many ancient cultures. But the Buddha carving is unique.

"The Iron Man statue is the only known illustration of a human figure to be carved into a meteorite, which means we have nothing to compare it to when assessing value," Buchner said in a statement. "Its origins alone may value it at $20,000; however, if our estimation of its age is correct and it is nearly a thousand years old it could be invaluable."

Clarification: Language has been changed to a headline elsewhere on the site to indicate that the artifact's material, and not the artifact itself, are of extraterrestrial origin.