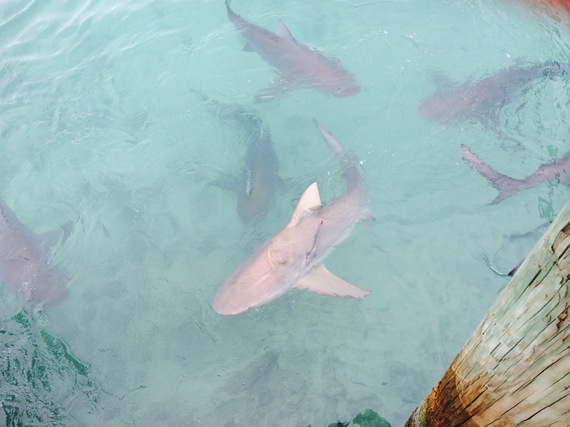 "Look at those big fellas, " remarked my old friend James Rolle as we sat with feet dangling off a beat-up dock at the Big Game Fishing Club on Bimini, a small island in the Northern Bahamas.

Jimmy and I were staring into the clear turquoise water a few feet below watching two bull sharks prowling between the weathered pilings of the dock looking for something to eat. Each of them weighed between three- and four-hundred pounds. Bulls are pugnacious fearless hunters that account for more attacks on humans than any other species of shark including great whites. Here were two of them hunting in the picturesque marina where tourists often jump in for a refreshing dip in the hot afternoon. I've often done this myself.

James Rolle, is a balding, large-bellied, deeply considerate man, just north of seventy. He was a sport fishing legend back in the day when it was considered heroic to troll big seas for huge marlin and blue fin tuna and to pull them in the boat and bring them back to the dock for tourists to gawk at. Fifty years ago, many anglers believed that game fish were limitless. We killed trophy fish without regret while trolling the oceans to find exotic hunting pleasure of the kind that Hemingway wrote about in sensuous lasting prose. Now years of overfishing mostly by commercial fishermen has gravely reduced the population of pelagic fish worldwide endangering the survival of many species including marlin, tuna and sharks, which are much coveted by the Chinese who use fins for soup. Chinese fishing boats pull sharks on board, cut off their fins and then roll the maimed creatures back into the ocean to die slowly and miserably.

Jimmy and I have been friends for half a century. He is a gifted storyteller and likes to recall days, not so long ago, when big game fish proliferated just offshore of Bimini like the vast buffalo herds on the Western plains. His story telling voice fell into the soft cadences of island music:

"One morning these two guys come down to Weeches' dock lookin' to go marlin fishin'. It was 1962 and I was runni'n a 28-foot Prowler, fast little boat. These two New York fellas want to know how much to go out for half day. I told 'em $150. But then I smile and offer a deal. I said, let's go double or nuthin'. I catch you a blue marlin and you pay me $300. If I don't get you one in four hours you get a boat ride free.

They look at one another. These guys were players and they don't mind a free boat ride on a hot day. If we happen to catch a blue marlin, they won't care about payin' 300 for such a fish. We shook on it, double or nothin'.

I ran the little boat out the harbor mouth and along South Bimini 'til we get to a bunch of old coconut trees where I turn her offshore. We went out across the bar headin' west but before we get to the blue water I see a marlin below the surface, its swimmin' shadow against the white sand bottom. A pretty sight I tell you. I yelled to my mate, 'Put out a line.'"

While Jim described his memorable fishing day a half-century earlier, I couldn't take my eyes off the two bull sharks. They were majestic creatures slowly grazing the slips of the marina, looking for a meal. But it was their size and portent that held me transfixed. When a bull shark locks in on prey, it is perhaps the most aggressive of all sharks. Several years ago I was watching one cruise in the tiny harbor of Rum Cay in the Southern Bahamas. There was a big dog standing at the water's edge, barking at the shark who became interested, and swam closer. Then suddenly an explosion of water as the shark hurled itself at the dog and when the dog scampered onto the rocks the bull shark followed wriggling onto the bank, beaching itself while snapping its jaws. It was a shocking moment that might have gone into an absurd Sharknado movie. It was hard to take it in that such creatures were now living in our marina.

"Fred, it didn't take thirty seconds before that marlin come up there man, crash on the bait. Maybe the fish weighed three hundred pounds but it stay right up on the surface, hardly runnin' at all, so I back the boat down to where it jumpin', and my mate grab the wire leader. We had a nice marlin on the deck in less than five minutes. Then I turned the boat around and head her right back to the dock-- we hadn't been out fifteen minutes.

'What's happening cap?,' says the second guy, the one who'd been watchin' his friend catch the marlin. 'Why we going back in? We just got out here.'

Now this other guy, he was a small fella, he was whining, 'Cap, I didn't even get a chance to fish. That's not fair. We gotta pay you $300 for fifteen minutes?'

I say, 'Well the only way you can fish is if you pay for another half a day.'

So the guy decides he'll pay for the next half a day. We caught him a nice sailfish and everybody felt happy. I was real happy. I had $450 in my pocket."

I looked over at my friend Jimmy who seemed pleased by the memory. During the years Jim had been a top gun fishing captain, vast schools of eight hundred and thousand-pound tuna would show up each May off Bimini on their annual migration south headed for the Riding Rocks, Orange Cay and on to Cuba. There had been so many giant tuna back then -- school after school of these incomparably powerful fish. The blue fin tuna schools were stalked by untold numbers of sharks, including packs of bull sharks waiting for a chance to pounce on a wounded or sickly tuna or one that had been hooked and slowed down by an angler. Now there are no more blue fin tuna migrating past these islands -- their population has been decimated by fishing -- and practically no more marlin. And the only bull sharks to be found were the ones in the marina, or so it seemed.

I'd learned that most afternoons at 4 p.m. at the south end of the basin a man would feed the sharks buckets of fish guts and carcasses. The marina advertised these bull shark feedings as a tourist attraction, which was a modest moneymaker. For $120, tourists were provided the opportunity to watch these feedings from beneath the water protected by a heavily barred cage. There was a gaudy sign reading "Bimini Bull Run" perhaps meant to evoke the spectacle of the running of the bulls in Pamplona where men are sometimes trampled and gored. But to keep the mood upbeat and inviting an illustrator had designed a campy poster of a voluptuous splay-legged girl riding bareback on a bull shark. 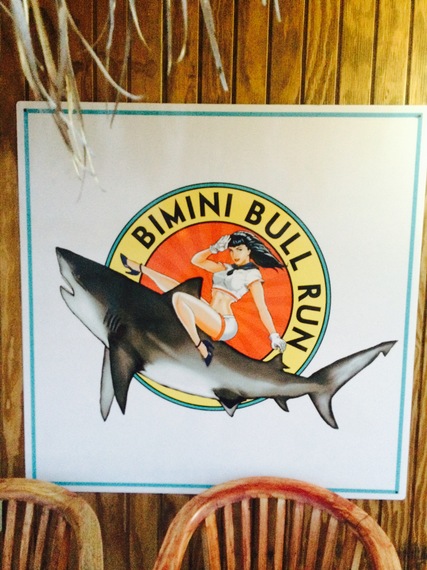 When I asked the man in charge whether he had reservations about luring big sharks into the marina from the open ocean with these festive and well-attended afternoon feeding events, he replied that the sharks had taken up residence in the marina on their own and that feeding them guts and carcasses would make the sharks more docile and less inclined to attack swimmers. He was a nice man who seemed to genuinely believe this stunning explanation. He also pointed to a NO SWIMMING sign nailed to a coconut tree.

The sun had fallen beneath the island and there was a blinding sheen on the calm water of the boat basin as if a door had been slammed closed. The sharks were still there, no doubt, sliding below our feet, finning out. But we could no longer see them, which made their presence even more sinister.

Jimmy was nodding, remembering something. In a moment my friend had turned darker, like the evening. The King of the Gulf Stream was now an old man sitting on the dock in torn trousers. He would have continued his story, but it was already late in the day and I said to him, "It's time for dinner man. You'll tell me the rest later, okay?"

(End of Part I. Part II can be viewed here.)

Journalist and author, 'Searching for Bobby Fischer' and 'The Dream Merchant'