The Occupy Wall Street movement has focused the national discourse on wealth inequality and, specifically, the split between the richest 1 percent and the 99 percent that's left. While most Californians, by definition, are not members of the wealthiest 1 percent, it turns out that many of us are represented in Congress by those who have attained that elite status.

The cutoff for the top 1 percent of American households, in terms of net worth, is about $9 million, according to New York University economics professor Edward Wolff. His estimate is based on the Federal Reserve Board's Survey of Consumer Finances, which put the figure at $8.2 million in 2007, he said.

That puts many members of Congress squarely within the 1 percent, including prominent members of California's delegation, such as Democratic Sen. Dianne Feinstein; Rep. Nancy Pelosi, also a Democrat; and House Oversight and Government Reform Committee Chairman Darrell Issa, a Republican.

Exact numbers are hard to come by because politicians report their wealth within wide ranges. A real estate asset, for example, might be worth somewhere between $5 million and $25 million. The Center for Responsive Politics compiled the numbers from 2009 as a range between minimum and maximum wealth.

Issa, worth between $156 million and $451 million, is California's wealthiest representative in Washington, based on the center's 2009 statistics. Issa doesn't appear to be an Occupy supporter, calling for an investigation into whether union members' money was inappropriately funneled to fund the protesters. An Issa spokesman did not respond to questions.

Feinstein is next, with between $46 million and $108 million. Democratic Sen. Barbara Boxer, on the other hand, doesn't make the 1 percent cut, with assets between $1.2 million and $5.6 million.

A Feinstein representative pointed out that she supported President Barack Obama's jobs bill, which included increased taxes on the wealthy.

“This would have been paid for by asking America’s millionaires and billionaires – those who have benefited from this economy while so many others have suffered – to contribute a little more," Feinstein said after Senate Republicans blocked consideration of the bill.

GOP Rep. Gary Miller, who sits on the committee overseeing the banking industry, is worth between $19 million and $84 million.

Pelosi reported a lot of liabilities, so her total is somewhere between negative $7 million and a maximum of $124 million, for an average of $58 million. Pelosi, however, has been supportive of the Occupy Wall Street movement.

"I support the message to the establishment, whether it's Wall Street or the political establishment and the rest, that change has to happen," she said on ABC's "This Week."

The Occupy protest in Cesar Chavez Park in downtown Sacramento is marked by a collection of signs that read, "We are the 99 percent." But exactly who makes up that percentage seems to be more of an idea than an actual number to some protesters.

A woman at an information table at the small protest said there are no rich people in the 99 percent.

"The 99 percent are the ones that are low income, and they get taxed more than anyone else," said Mary, who declined to give her last name.

Another protester, Kevin Carter, said only billionaires – of which there are none in Congress – should qualify for the 1 percent.

"Millionaires are fine – they’re part of the 99 percent," said Carter, 51. "Our challenge is to get the millionaires to understand this is not about class warfare."

Carter said he's less concerned that politicians are wealthy than that they're swayed by corporate lobbyists.

Derek Cressman, Common Cause's Western states regional director, said the extreme wealth of many politicians puts them out of touch with regular people. The influence of the wealthy, he said, has led to "policies that have really made the 1 percent dramatically better off and left 99 percent of us behind."

Some wealthy politicians, like the late Sen. Edward Kennedy, a Massachusetts Democrat, do stick up for the poor, Cressman said. But in a representative democracy, he said, "the 99 percent should be represented ourselves, rather than counting on the charity or benevolent sympathies of the 1 percent."

Members of Congress are out of touch because they are powerful professional politicians, not because they're rich, said Michael Tanner, senior fellow at the libertarian Cato Institute. The emphasis on the richest 1 percent can be harmful because it targets people who are successful but haven't done anything wrong, he said.

"I think that corporate welfare is obscene, but I don’t think the existence of inequality and wealth is simply a bad thing," he said. "There's people who got rich because they worked hard or gave us something that we really want."

"Steve Jobs did more to make us better off than a lot of social workers," Tanner said. "I don’t care that he got rich – I got an iPad."

Table 1: Members of California's congressional delegation with average net worth above $9 million, from 2009

Table 2: All members of Congress with average net worth above $9 million, from 2009 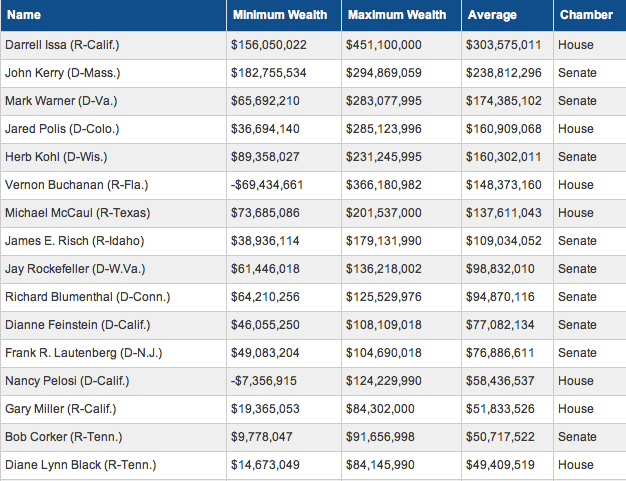 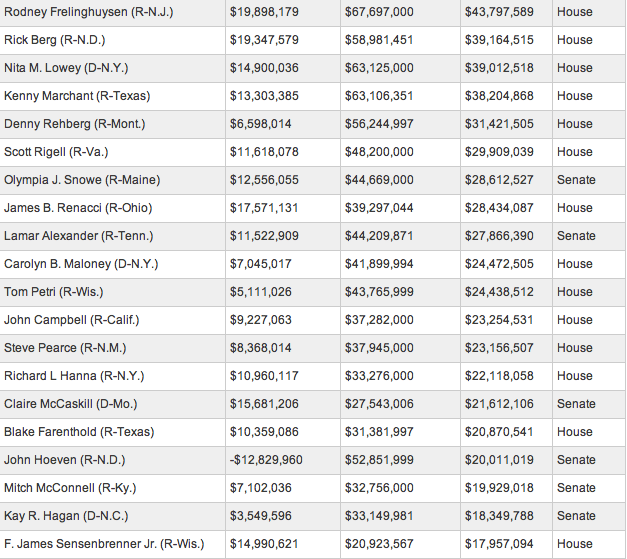 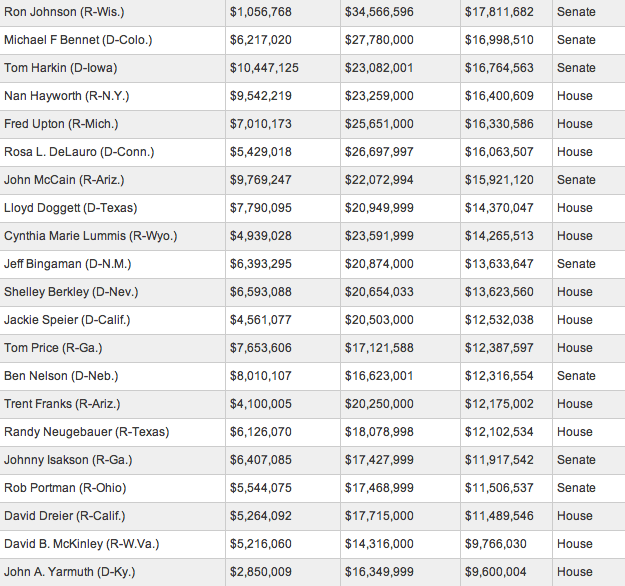