LOS ANGELES -- After the hospital bills from a minor knee injury helped drive him to bankruptcy, it was easy for Barry Rubinowitz to ignore his new symptoms.

A writer by profession, he had gone without health insurance several times in his life. When he started experiencing diminished sex drive and lower energy levels during the late '90s, he dismissed the issues as mild depression or old age and never sought treatment.

It wasn't until 2003, when Rubinowitz was on COBRA health insurance after a recent layoff that he was referred to an endocrinologist for further examination. That doctor found a large pituitary tumor wrapped around his optic nerves that could have blinded or even killed him.

Rubinowitz's COBRA insurance expired and he applied for Medi-Cal, but claims he was denied because he was childless, too young and too rich. If it weren't for the charity of his doctor, who continued to treat him for free or at cost, Rubinowitz doubts he would have been able to keep receiving the care he needed to shrink his tumor.

Rubinowitz credits his doctor for saving his life, but he refuses to cast his story as a heartwarming example of one man's generosity. Instead, it's about a broken health care system and how close he came to a preventable death.

There are approximately 2.2 million Angelenos without health insurance. When they need health care, they turn to the Los Angeles County Department of Health Services, a massive $3.6 billion agency that includes four public hospitals, multiple health centers that offer both primary and speciality care, and additional partnerships with non-profits that offer primary care access at more than 100 clinic sites countywide. In the 2010-11 fiscal year alone, the agency spent $1.15 billion -- a combination of county, state and federal funds -- on services for uninsured patients.

Of the four hospitals the agency operates, the Los Angeles County-USC Medical Center is the largest single provider of health care in the county. It casts the region's biggest safety net for the uninsured and has an operating budget of $1.2 billion for fiscal year 2012-13.

Dr. Sean Henderson, the chief of emergency services at LAC+USC, is proud of the care his hospital provides. No one is turned away, regardless of ability to pay, and even the poorest Angelenos have access to a world-class burn and trauma unit in a brand new, state of the art facility.

But the numbers are daunting: His department alone receives a staggering 175,000 patients every year. Many of them, especially the uninsured, are coming to the emergency room for problems that could have been nipped in the bud with regular visits to a doctor.

Henderson says he understands exactly why the uninsured put off getting care at LAC+USC. He estimates that his emergency room patients wait an average of eight to 11 hours to see a doctor, depending on their condition.

"Our patient population knows that the resources are stretched. And sometimes they will choose not to come to us when they're only a little sick because they don't want to wait," Henderson told The Huffington Post. "They'll wait until they're really sick, and sometimes that's difficult. Because by the time they get to us, they're sicker than they should be."

Even something as routine as getting a prescription refilled can take an entire day due to the number of patients waiting in line.

"These people turn in their prescriptions at 7 a.m. in the morning and wait for them all day long. If they need me to give them a refill, they have to come in, register, and then wait all day long for me to see them. I'm doing the best I can, but these are the kind of gross examples."

Still, for Dr. Ron Kall, a 26-year-old resident physician working toward his license, patients like the ones he sees at LAC+USC are the reason he became a doctor. "You can always make money somewhere else," he said, "but County needs people who are enthusiastic about this population."

While Kall loves his work, he's well aware of the challenges and frustrations involved with treating the uninsured. As a primary care physician, he sometimes has to refer patients to overloaded speciality clinics in other parts of LAC+USC. In describing what it's like to tell an uninsured patient they need to wait months for surgery, Kall doesn't mince words: "I feel shitty. It's heartbreaking."

Long wait times and limited access to preventive care are two of the issues President Barack Obama is targeting with the Affordable Care Act (ACA), the health care reform legislation often referred to as "Obamacare."

Major policy changes, such as an expansion of Medicaid -- called Medi-Cal in California -- will allow Californians to sign up for the program if they make up to four times more than the poverty level. Already, California has signed up some 400,000 new Medicaid recipients under the ACA, according to the Washington Post.

It's hoped that access to both affordable private insurance and expanded Medi-Cal will get people out of hospital emergency rooms and into primary care clinics, relieving some of the pressure on public facilities like LAC+USC.

Nevertheless, Henderson has reservations about 2014, when the ACA takes full effect. Right now, 40 percent of the hospital's patients are uninsured, 40 percent are on Medi-Cal and only six to eight percent are covered by private insurance. The remainder gets coverage from a complex mixture of Medicare, Medicaid and Medi-Cal.

Once ACA goes live in 2014, he worries about possible funding cuts for the hospital: While the law anticipates newly insured patients will seek care elsewhere, Henderson suspects cuts will hit LAC+USC before people actually start taking advantage of Medi-Cal or the health benefit exchange.

Henderson also worries that while more patients will be covered by Medi-Cal, many physicians outside the public hospitals may refuse to accept Medi-Cal patients.

But if Republican presidential candidate Mitt Romney wins the 2012 election, the changes already taking place in California could grind to a halt. Throughout his campaign, Romney has vowed to use his first day as president to repeal the Affordable Care Act. And his running mate, Rep. Paul Ryan (R-Wisc.), has said that people should rely on private charities for social services instead of the government.

For Howard Kahn, CEO of a countywide public health plan called LA Care, both are missing the mark when it comes to the nation's public health crisis. "I'm not in politics, I'm in health care," he said. "But to Gov. Romney, I would say, 'Gosh. I thought it was a pretty great idea when you did something similar in Massachusetts.'"

As for Paul Ryan's notion that private organizations can provide an adequate safety net, Kahn said simply, "Health care is 18 percent of the economy. It's tough to ask for that to be voluntary."

Kahn would know. LA Care is a presenting sponsor of Care Harbor, a non-profit has been organizing huge four-day clinics once a year for the past four years to provide completely free health care to Angelenos in need. Last year, it took 3,200 medical volunteers from more than 100 organizations to staff pop-up clinics that were able to serve 5,000 uninsured or underinsured Angelenos who had been suffering from chronic problems like abscessed teeth, cardiovascular disease, untreated diabetes or undiagnosed vision problems.

2012 is a critical year for the free clinic, as well as the Affordable Care Act. From Sept. 27-30, volunteers will for the first time be able to explain the details of ACA to thousands of people who are in dire need of affordable health care. With that in mind, Kahn has said this could be LA Care's most important year yet.

"There's no doubt in my mind that in a place like LA County, the residents stand to gain here," Kahn said. 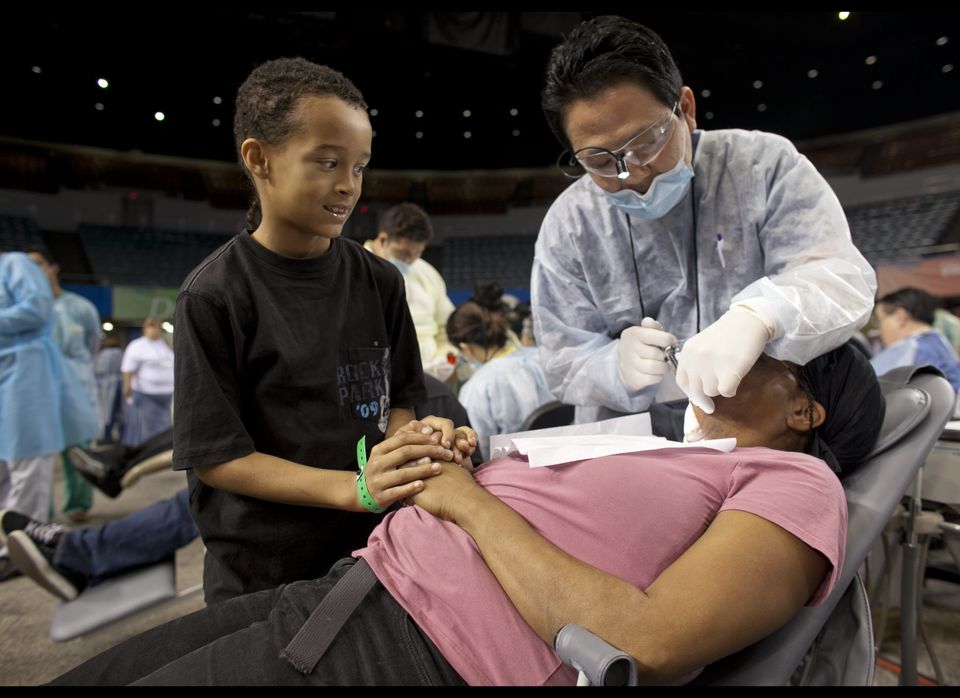 1 / 9
Corey Bowers, 9, left, comforts his mother Deborah Dawson, 49, as she gets ready for a dental extraction at a free health clinic sponsored by CareNow at the Los Angeles Sports Arena Thursday, Oct. 20, 2011, in Los Angeles. Photo and caption by the Associated Press.