In the spring of 1861, a curious tune could be heard in the streets and saloons of Los Angeles. A local favorite, "We'll Hang Abe Lincoln from a Tree," captured the stormy mood of this frontier town, recently transformed into a hive of Confederate sympathizers. Accompanying this secessionist fanfare, rumors of rebellion swirled across California. The Civil War had arrived in the Far West.

150 years later, the Civil War is still very much with us - in museum exhibits, battlefield commemorations, TV specials and a flurry of publications. Yet amidst all this remembering, the war's Western dimension has been largely forgotten.

Today, most Americans assume that California remained free of slavery and the bitter conflict it provoked. Human bondage was a Southern sin, we tell ourselves, and the Civil War an Eastern struggle.

In fact, California possesses a deep, troubled history with slavery that shaped the state's racial politics well into the twentieth century. This overlooked history, too, should have a greater place in the ongoing Civil War sesquicentennial. After all, true racial justice in this country requires nothing less than a full reckoning with our past, in all its nuance and ugliness. 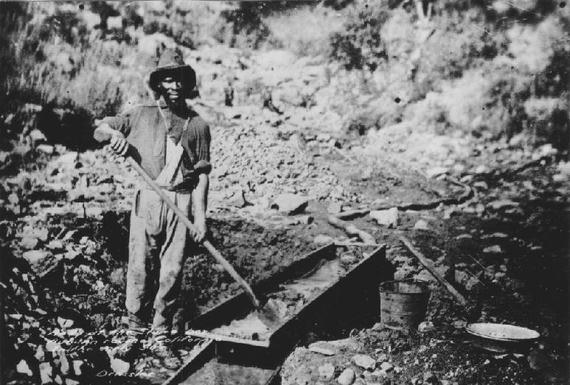 A black miner in gold rush California. Historians estimate that between 600 to 1000 enslaved African Americans were forcibly transported to California before the Civil War. Whether or not this particular miner was enslaved is unknown. (Bancroft Library)

When California was admitted to the Union as a free state in 1850, its struggles with slavery had, paradoxically, only just begun. By that point, Southerners had already imported hundreds of slaves into the region, and over the next decade they would transform California, especially Southern California, into the proslavery bastion of the Far West.

Through the 1850s proslavery Democrats dominated California politics, ensuring that the state voted more like Virginia than Vermont.

For example, in 1852 the state legislature decreed that all slaves brought into California before statehood would remain enslaved, so long as they were eventually carried back to the South. Slaves who resisted were categorized as fugitives and prohibited from testifying or calling witnesses in their defense. In dozens of cases, California's courts ruled in favor of slaveholders.

As historian Stacey L. Smith has documented, California contained between 600 and 1000 enslaved African Americans before the Civil War. And slaveholders constantly plotted to increase this number.

Shortly before orchestrating America's acquisition of a 30,000 square-mile region from Mexico (what history textbooks now refer to as the Gadsden Purchase), the South Carolinian James Gadsden attempted to plant slavery on California's ostensibly free soil. With the help of his friends within the state, Gadsden planned to establish a California colony of transplanted Southerners, along with their 2000 enslaved laborers. Although his proposal ultimately failed, that the state legislature even entertained such a brazenly unconstitutional petition indicates just how sympathetic California had become to proslavery intrusion.

Gadsden was also part of a broader movement to divide California and create a separate territory from its southernmost counties. Many believed (and hoped) that the new territory would eventually become a slave state. In 1859 a state division bill passed both houses of the California legislature, was approved by an overwhelming majority of Southern California voters, and then forwarded to Washington for authorization. The split was narrowly averted, as Congress, distracted by the rising controversy over slavery, shelved the bill.

(Advocates of state division, who organized again just this year, may not recognize that their movement has deep roots in California's proslavery past.)

Upon Confederate secession, a number of prominent Californians entertained the idea of forming a separate Pacific republic. The Los Angeles Star, the city's first major newspaper, blamed Lincoln and his party for the war and strongly endorsed the creation of an independent Far West. Lincoln himself feared that California would detach from the Union.

During the war, Union troops garrisoned Southern California to prevent an uprising of the region's numerous Confederate supporters. In the summer of 1864, a small band of Confederate rangers, assembled from the rebellious local population, raided California's gold country, robbing stagecoaches and engaging in several shootouts with authorities. Most of the gang was eventually captured, but not before deeply unsettling the region's Unionist population.

California also faced threats from far larger forces, namely a Confederate army of over 3,000, which invaded the Southwest in early 1862. With the ultimate objective of seizing California's ports and gold, this army succeeded in conquering nearly the entire territory of New Mexico and reinforced the Confederate territory of Arizona, before finally being turned back at the battle of Glorieta Pass.

California's politics of racial exclusion continued to thrive long after the Civil War. California was the one free state to refuse to ratify both the 14th and 15th Amendments, those that expanded civil rights and guaranteed black male suffrage, respectively. Fearing the enfranchisement of Chinese-Americans, California legislators delayed ratification of the 15th Amendment until 1962. By that point America had already begun launching astronauts into space.

California's overlooked early history holds important and timely lessons, especially as we enter the final year of the Civil War sesquicentennial. To lay the blame for slavery solely at the South's door is not only historically inaccurate, it is politically irresponsible. Such an impulse encourages a misguided brand of American exceptionalism; it ignores the truly transcontinental reach of the nation's ugliest institution, and excuses our long history of racial bigotry as the aberrant byproduct of a single region.

The tragedy of slavery and the trauma of the Civil War have left legacies with which all Americans, from coast to coast and everywhere in between, continue to live.