It was a full moon night, with a light breeze to ward off the August heat at a stadium in the seaside town of Marathon, Greece, where in ancient times the soldier Pheidippides set off to Athens to deliver news of a military victory against the Persians.

Today this is where thousands of athletes from around the world flock to test themselves every November...will they beat their record and run the traditional 42.1km Marathon to Athens in a shorter time?

On this night, one by one sun-tanned locals and seasonal holidaymakers (many Athenians have their weekend cottages here or nearby along the coast) came to the stadium with their folding beach chairs in hand. There was seating available, of course, but as of late, inventive Greeks living by the beach usually bring their own chairs, which admittedly have all the comforts one could expect of a fully-fledged chaise lounge.

Peacefully, everyone took a spot in the stadium for the concert. But this was no ordinary concert, this was Greek singer Alkistis Protopsalti's first concert as the country's alternate tourism minister.

The popular performer was appointed to the post and had stepped in as interim alternate minister on Friday, taking over from model Elena Kountoura. With her glowing smile, Alkistis came to the stage amid hundreds of fans after a brief but witty intro by Marathon Mayor Ilias Psinakis. She coyly thanked the audience and promised to do what she's successfully been doing for over four decades: bringing Greece closer to the world through her song. 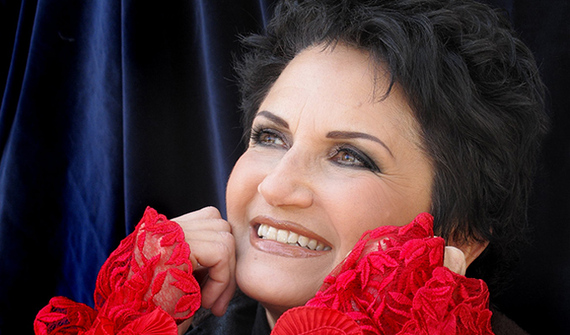 When Alkistis was announced tourism minister, I could picture the heckling and sneering comments: "What does a singer know about tourism?" "Wasn't there anyone better trained to select," even SKAI TV Greece went as far as to air a not-so-flattering video of one of the singer's dubious hits minutes after the breaking news.

But I really do wonder, does one need to be an expert to take on a Greek ministry? After all, we've seen where that group got us. I mean, the man who organized the two-hour concert -- which was free to all -- is bon viveur/eccentric/artist manager Ilias Psinakis, who came to power in 2014 by majority vote and took over a totally ravaged Attica municipality attempting in his short tenure (and amid trying times) to make up for lost time and money by tapping into every advantage his seaside municipality has. And he is doing so successfully, without the bickering, inter- and intra-party antics and backstabbing -- the standard modus operandi of Greek politics.

And perhaps we should add, that in this country of 11.5 million (plus the staggering numbers of illegal migrants and refugees flocking here as other EU countries in favour of human rights simply "look on"), we have all learned, for lack of trust in any form of "authority," to do things on our own. How does this fit in you ask? Well simply put, most of us kinda know a lot about everything: from politics and plumbing to medicines and management. So if one really wants to survive in the Greek working (and living) environment, they'll basically have to be amateur lawyers, doctors, accountants, politicians or in one word: managers.

Which brings me to Alkistis. For over four decades, she has been a role model of a performer. Yes, she's made some not-so-smart choices, like appearing in an ad for a bank, but who hasn't. (I will not examine each and every one of our politicians.) But she has worked hard, diligently and with respect to anything she has decided to take on. I don't know if it's the sport ethic she grew up with as a sprinter in her younger years or her idealistic love of her country being born in Alexandria, Egypt, and displaced by the Nasser hyper-nationalist regime in the '60s, but she feels genuinely proud every single time she travels abroad to perform and represent Greece with her undeniable talent.

Had I been asked years ago, I would probably have agreed, even argued, that singers (and artists, in general) have no place in politics, and yet, now, after all the so-called "knowledgeable" and "devoted" individuals who describe themselves as politicians have led my country to the depths of despair, I can only wonder whether instead, we need people who are good managers more so than those who know how to play the game of politics -- i.e. kinda lying, kinda negotiating, kinda compromising, kinda forgetting morals in the process.

I admit, I feel both happy and sad for Alkistis, because on the one hand it is indeed an honor for someone who loves their country in the idealistic sense to be asked to become a minister, but on the other, one needs a stomach of steel to cope with all the ugliness of politics... and I would add, the helplessness that accompanies certain decisions, especially in these so testing times for Greece.

Protopsalti will be serving as alternate tourism minister in the caretaker Greek government for some three weeks to the snap elections on September 20. At the Marathon concert, attended by several political personalities including former Athens Olympics Mayor and foreign minister Dora Bakoyannis, Alkistis gave us her all. The full moon in the background, the flashing blue and white lights, the talented musicians, the historic location and the weary-of-promises audience all made up the picture of Greece today: paradise lost... after all, tomorrow is another day.