If you’ve ever suggested training your cat to a friend or colleague, there’s a good chance they laughed in your face. But Samantha Martin, lifelong animal trainer and the founder of The Amazing Acro-Cats, says cats are unfairly stereotyped as un-trainable.

Martin’s traveling circus troupe of 14 felines — most of whom were rescued from shelters or the streets — play musical instruments, jump through hoops and even skateboard. While your pet may not be musically inclined, Martin recommends that every cat owner train their furry companion to some degree.

Check out our podcast to hear Martin talk about feline training, her animal welfare work and what life on the road with 14 cats is really like.

In the meantime, here are some things to know to about cat training to get you started. Fluffy will be walking a tightrope in no time.

“Any cat can be trained to do something,” Martin told The Huffington Post. She says  people don’t think of cats as trainable -- and that's just wrong. “People don’t think to train them," she said. "So there aren’t a lot of trained cats out there.”

Martin uses only positive reinforcement (no spray bottles for her), and mainly uses two techniques — whistle training and clicker training. Whistle training involves getting a cat to associate a whistle sound with food, so that the cat will run toward the sound of the whistle if needed.

“Patience is key,” she said. “Generally it will take about three training sessions to really key into what’s going on.”

With clicker training, the trainer uses a clicker to make a sound at the exact moment that the cat performs a desired action, then rewards the cat with a treat. The clicking sound works as an "anchor" to let the cat know the exact action that is getting rewarded.

When Martin had to train a cat to pull the trigger on a gun for a movie, she made the clicking sound at the exact moment the cat’s paw touched the trigger, then she'd give the cat a treat. The clicking sound helped the cat know that the treat was for touching the trigger specifically, instead of just generally touching the gun. Hopefully, you won’t be teaching your cats to wield a gun, but the technique is still applicable.

2. You CAN teach an old cat new tricks — but it might be slightly more difficult

You can train a cat at any age, Martin says, but she admits the younger you start, the easier it is. Martin explained she’s taught cats of all ages to perform, but the only cats she tours with are ones she’s trained since kittenhood, since those cats have grown up acclimated to life on the road in the Acro-Cat RV.

One technique she said can be especially important with older cats is to work with the natural tendencies they have, anyway. If your cat tends to reach out and touch things with his paws, training the cat to shake hands or do a high-five might be ideal.

“Base things on what the cat wants to do,” she said. “That’s basically what I end up doing. I watch my cats.”

Cat training is a “negotiation," said Martin. "Dogs are true professionals, but cats are more like employees who you would fire if they were people." She notes that very short training sessions are best for cats. Some dogs will enthusiastically work with a trainer for hours on end, she said, but “you’re lucky to get 10 minutes out of a cat.”

However, that’s not to say that training isn’t important…

4. Training can save cats' lives, in more ways than one

Does your cat consistently come when you call her? Martin whistle-trains all of her cats to go into their carriers at the sound of a whistle, and recommends that everyone do the same. She says this basic command can be crucial when you need to take your cat out of your home in an emergency, or if your cat gets loose in a public place and you need to call her back.

Training can save cats’ lives in more indirect ways, too. A lot of cats end up on the “kill list” in animal shelters because they’re too shy or fearful to likely get adopted. But clicker training can help many cats overcome those tendencies, according to Martin. When a cat can start to associate a person’s hand with treats and positive reinforcement, the cat’s relationship with humans will improve immensely. And for a cat who might otherwise get passed over, learning a trick or two could be a ticket to a new home.

If a cat in the shelter "starts high-fiving visitors," it's pretty much a guarantee the cat will get adopted, Martin said.

5. It can strengthen your bond with your pet and curb bad behavior

“A lot of energetic cats are the ones that cause problems in the home,” Martin said. They’re the cats that end up clawing the furniture, knocking things over and running endlessly around the house in the middle of the night. Luckily, those same cats can also be the most trainable. Cats act out because they’re bored and have excess energy, and training them gives them both exercise and mental stimulation.

Plus, training improves your ability to communicate with your cat, she says, something that makes it a more satisfying relationship for both of you.

6. It can make your life a lot more hilarious

“When I walk in the door, it’s like a circus happens on its own,” Martin said. When she gets in, several of her felines will scamper over to their instruments and start plucking away at the guitar or banging on the drums in hopes of getting a treat.

If there’s a better scene to come home to, we sure don’t know what it is.

Listen to our embedded podcast, and head over to iTunes to rate, review, and subscribe to the show. Your continued support allows us to keep petting kittens on the clock. And check out other HuffPost Podcasts.

Thank you to the people who prevent too much fur from flying, producer Katelyn Bogucki and editor Jorge Corona.

Think Cats Can't Be Trained? Oh, How Wrong You Are
The Amazing Acro-Cats 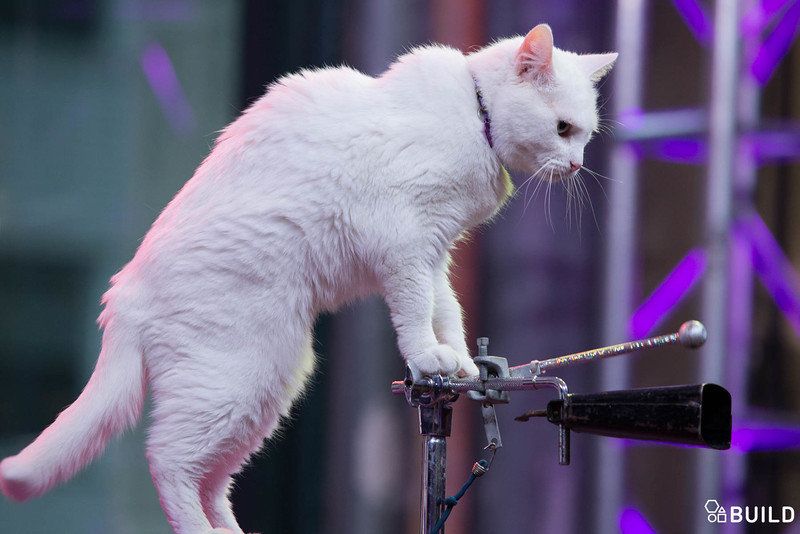