I left on Thanksgiving Day for Paris. It's a different Paris than I thought I would see when I booked my flight two months ago. Or when many of us began planning for this moment four years ago. The attacks broke our hearts and redefined Paris. But that is not the only thing that has changed.

As I watched from the cheap seats yesterday, 150 heads of state - from President Obama to Chinese President Xi to Russian President Vladimir Putin - spoke with urgency, determination and indeed hope about the fight to hold back the worst impacts of climate change. (When do those three agree on anything?) Even more countries, over 160, delivered new targets to reduce carbon emissions before arriving here. We've never seen this level of commitment from world leaders to act on climate.

Why the change? The leaders painted a vibrant image of the kind of world we can expect if we fail to act. Widespread droughts. Rising seas. Lost coastal communities. Greater threats to our global food system. Every corner of the globe is represented at the old airfield outside Paris where the talks are being held. But no matter where we live, we are all united by this threat. As President Obama said Monday, "no nation, large or small is immune from the impacts of climate change."

But the climate threat isn't the only reason why governments are finally stepping up. On the opening day of the talks, we heard as much about the 'opportunity' presented by climate change. Renewable energy markets are soaring, presenting strong investment opportunities while rapidly bringing down the cost of our transition off of dirty fossil fuels. So while an ambitious climate agreement can help fend off the worst impacts of climate change, it can also be a needed shot in the arm to the global economy. By sending a strong directional signal that the entire world is moving even more deeply into an energy and sustainability transition, the Paris outcome can help major international businesses and investors plan and bring more of their capital off of the sidelines.

And speaking of capital, this week we saw 20 of the world's largest economies - including China, the United States, India, Germany and Brazil - pledge to double their public investments in clean energy research, development and deployment. That was encouraging, but what might be game-changing is that this "Mission Innovation" coalition announced that it would be partnering with major private sector investors. People like Bill Gates, Ray Dalio from Bridgewater Associates, Masayoshi Son from SoftBank in Japan and Neil Shen from Sequoia Capital China will help ensure that these public investments in RD&D will be coordinated with private investors pledging to move more 'patient capital' into zero-carbon technologies.

This more sophisticated approach to the clean energy transition is what we need to move faster and close the emissions gap between the current pledges on the table from governments and the safer trajectory of limiting warming to below 1.5-2°C.

But maybe the most significant change of all is that companies aren't just moving their financial capital off of the sidelines, they are putting their political capital on the line too. Starting just five years ago, a handful of politicians shockingly but successfully have made climate action politically controversial in Washington, DC. As they've done so, most companies began to go silent where they had previously been strongly supportive. That's finally starting to change.

Don't take my word for it; just open up your morning paper. Today, a group of more than 100 leading US companies arrived on the doorsteps and to the inboxes of investors, competitors, suppliers, and customers with a call for strong climate action: 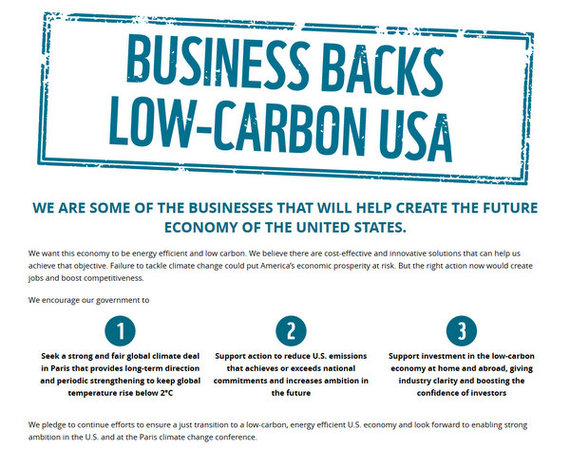 In a full page ad in The Wall Street Journal, these companies are calling on the United States government to seek a strong global climate deal in Paris, to act to reduce emissions at home, and to increase overall investment in the low-carbon economy. What makes this statement remarkable is that it's coming from a broad cross-section of the biggest drivers of US economic growth: high-tech, energy, lifestyle, manufacturing, and food and beverage sectors. And they are brands we all know. DuPont, eBay, General Mills, Hilton Worldwide, HP, Mars, Inc., McDonald's, Microsoft, Nike, and Pacific Gas & Electric, to name just a few.

It's not often that the President of China, Wall Street, Mars and Pope Francis all put their weight behind something. As these critical talks begin in Paris, there are encouraging signs that the pieces are coming together to change climate change. And not a moment too soon.