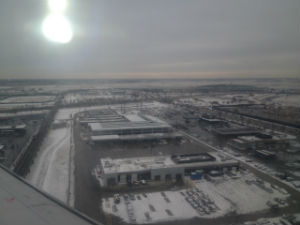 Our view as we approach O'Hare. Photo by Jeff Kelly Lowenstein

We're in the air from Toronto to Chicago.

We've left Santiago, site of fulfilled dreams, 80 degree Christmas Days, our impossibly dusty postage stamp of an apartment, and the consumption of more pisco sours and glasses, well, bottles, of red wine than we could have ever imagined, and are heading back to the Windy City that has been our home since 2002.

With grins that stretched beyond our ears, Dunreith and I deposited the check from the house sale we completed the day before we left on our Chilean adventure.

It far exceeded our greatest expectations.

We had the great privilege of being in Chile as the nation confronted, more directly than ever before, the still raw wounds from the Pinochet coup that happened on September 11, 1973.

We attended vigils and memorials events and plays and conferences and documentary films and panels and book launches, all of which were dedicated to grappling with the enduring impact of the overthrow of democratically-elected Salvador Allende and the brutal aftermath.

I've lived in the United States close to 50 years, but never before had I witnessed the concentrated and unified focusing on a single event in our nation's history the way Chileans from Arica in the north to Punta Arenas at the end of the world turned their attention to the coup.

In October we witnessed the jubilant eruption of emotion issuing forth from Chileans who hugged, kissed, screamed and honked their horns when their beloved soccer team punched its ticket to the world's largest sport event, to be held next June in Brazil.

In November we went to election events and talked to voters of all persuasions and ages and sides of the political spectrum during what turned out to be the first of two rounds in the presidential elections.

And in December we traveled to Torres del Paine, a national park of unsurpassed and staggering beauty that recently was named the eighth wonder of the world, when Michelle Bachelet made history in becoming the first candidate ever to be elected president twice in the post-democracy era.

Beyond these momentous months in Chilean history, we received an enormously generous reception from Chileans with whom we had some connection-we met everyone from dear friend Marjorie Agosin's seemingly inexhaustible supply of cousins and former students to a female anesthetist Dad had helped train nearly 30 years ago to our colleague, friend of a friend, guide/secret weapon Alejandra Matus - -and those whom we had the good fortune to meet through our travels.

My Data Journalism students at the University of Diego Portales gradually understood my Spanish, my teaching methods and the concepts and application of this type of journalism in a process that left both sides feeling enriched for the encounter.

My research into the landmark 2009 Transparency Act, after an initial shift in focus, led me to talk with journalists, lawyers, non-profit executives, government representatives and plain folks in a project that gave me a sharper sense of the law's as yet incompletely realized potential.

Dunreith and I traveled to the vineyards of the Central Valley, to the coast cities of Valparaiso and Vina del Mar. With Aidan we flew to the searing desert of San Pedro de Atacama, the world's driest such space, and to Patagonia, a place Dunreith had longed to visit for years.

We also ventured to Rio, where I had the honor of attending, teaching and presenting to colleagues at the Global Investigative Journalism Conference doing investigative work, often at great physical peril, throughout the world.

We flew to Buenos Aires, where we met Dad and Lee before they set off on a two-week tour to Southern Argetina and up through Chile, and strolled together down elegant, inordinately wide, European-style boulevards, ate ice cream at Cafe Tortoni, the continent's oldest cafe that oozes with swagger, listened and learned for three hours at ESMA, the largest of the Argentine dictator's network of detention centers, and feasted on the sights and food of El Ateneo, the former theater that has been converted into one of the world's most spectacular bookstores.

Jon and I had the tremendous fortune to receive a grant from the Pulitzer Center to do a project about the impact of the past on the present in Chile 40 years after the coup. Together we worked long hours over the course of two weeks for a three-part series that ran on The New Yorker's Photo Booth and on Hoy's website.

The family visits over our final six weeks in the country helped confirm to me the possibility of weaving together the people and passions and dreams and values that I hold most dear. Perhaps, greatest of all, it's fortified my increasing conviction that this way of living was not only possible, but could in a very real sense become ordinary.

Now, we are returning to Chicago, the city from which we have left, where we raised Aidan from a boy to a man, and where we have spent the vast majority of our married life.

I am, and will always be, a Bostonian at my core.

I had too many seminal events, from the Blizzard of 78 to the 1975 World Series to growing up amidst that inimitable accent for it to ever be otherwise.

But if Boston in my heart, Chicago's in my guts.

The people's straightforward manner and generous spirit, the city's sense of itself as a place of story and legend, the passion that Chicagoans bring to their sports and their politics and their brats and their neighborhoods, its industrial past and tortured history with race and segregation and immigration and labor that make it what the late, great Studs Terkel called "the true American city", have all gotten in deep, and are not going anywhere, either.

I'll miss our life in Santiago and our travels throughout the country and continent, to be sure.

And I'm excited to fly over the leafless trees toward the dirtied snow and land at O'Hare, to walk in the 20 degree weather and see our breath and our circle of friends and family again, and to bring a fresh, broader perspective to my ongoing love for the city.

We don't know our exact next steps, or, frankly, where we're going to live after we stay at my brother Jon's place on the South Side.

But we do know without any shred of a doubt that, as always, the adventure will continue.