For a small town tucked away in the Himalayan foothills, Dharamsala attracts a surprising number of tourists and travelers from around the world. One popular destination in Dharamsala is the Dalai Lama Temple, where at any given moment you will find tourists standing at the main entrance staring at a hand drawn picture of a cherubic six year old boy and a sign that reads "Tibet's Stolen Child, The 11th Panchen Lama, Gedhun Choekyi Nyima." Days after Gedhun Choekyi Nyima was recognized by His Holiness the Dalai Lama in 1995 as the reincarnated 11th Panchen Lama, he and his family were abducted by Chinese authorities.

This year, as Tibetans and supporters observe the 20th anniversary of the Panchen Lama's forced disappearance, the coming 80th birthday of His Holiness the Dalai Lama further presses the question of his whereabouts and raises a far more serious question: Why did the Chinese authorities abduct him in the first place? 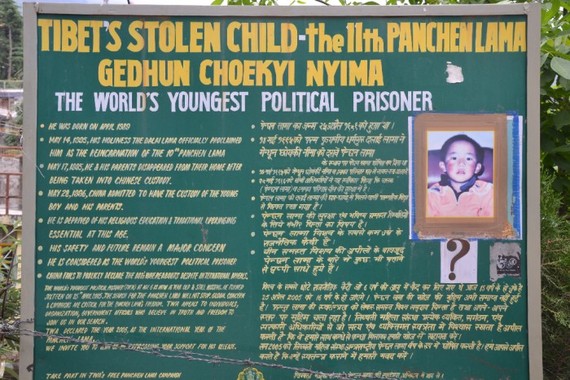 At the entrance of the Dalai Lama Temple, Dharamsala. Nicomel

1. He was the youngest political prisoner in the world
On May 14th 1995, a 6-year-old boy, Gedhun Choekyi Nyima was recognized as the 11th Panchen Lama by His Holiness the Dalai Lama. Within three days of the announcement, the Chinese authorities kidnapped the young child and his family and instead installed another boy, Gyaincain Norbu in his place as the 11th Panchen Lama. The United Nations and human rights groups have strongly condemned this act. After 20 years, Tibetans continue to hold the only available picture of the 6-year-old Panchen Lama and call for his immediate release and pray for his well being.

2. He has a unique relationship with the Dalai Lama
Reincarnation of Tibetan lamas is a centuries-old tradition. It plays a critical role in the relationship between the Dalai Lama and the Panchen Lama. His Holiness the Dalai Lama is considered the highest reincarnated Buddhist spiritual leader not only by Tibetans but also Buddhist communities around the world. The Panchen Lama is the second highest Tibetan spiritual leader of the Gelug sect. The relationship between the Dalai Lamas and the Panchen Lamas is unique. In fact, it was the fifth Dalai Lama who bestowed the title of 'Panchen Lama', meaning 'Great Scholar,' to an abbot of Tashi Lhunpo monastery, Lobsang Chokyi Gyaltsen (1570-1662). Each lama in their lifetime is not only involved in the search for the other's reincarnation, but also assumes the role, first as the disciple and later in life as the teacher, of the other.

3. His previous incarnation died mysteriously
The 10th Panchen Lama was a strong advocate of Tibetan cultural identity throughout his life, which is reflected in his famous 70,000-character petition submitted to the Chinese government on May 18, 1962. In the petition, he said, "After the introduction of reforms, Buddhism has suffered a serious setback and is now on the verge of extinction." For this reason, the 24-year-old Panchen Lama was dismissed from his government positions, publicly humiliated, and imprisoned for 14 years. After his release from prison, he continued to travel to different parts of Tibet and publicly criticized Beijing's policy in Tibet regarding education, economic development, population transfer and discrimination of Tibetans in their own land. In 1985 at the grand Monlam Festival (Annual Buddhist Prayer) in Lhasa, the Panchen Lama publicly expressed his allegiance and loyalty to His Holiness the Dalai Lama. On January 24, 1989 he stated that Chinese rule in Tibet has brought more destruction than benefit to the Tibetan people; this became his last public statement. Five days after, the 10th Panchen Lama suddenly died in Tashi Lhunpo Monastery. Many suspected that the Panchen Lama was poisoned by forces working for the Chinese government.

4. He was replaced by "China's Fake Panchen Lama"
After almost half century of China's illegal occupation of Tibet and turning it into a military zone, Tibetans continue to resist against China's oppressive rule. The Chinese government's motives of kidnapping Gedhun Choekyi Nyima and his family is a desperate political attempt to not only control all aspects of Tibetan religion and culture but also to secure legitimacy over its rule in Tibet. The Chinese authorities appointed Gyaincain Norbu as the 11th Panchen Lama by force on the Tibetan people but he did not succeed in gaining the respect and recognition from the Tibetan people. He is known as "China's Fake Panchen Lama" to all Tibetans. 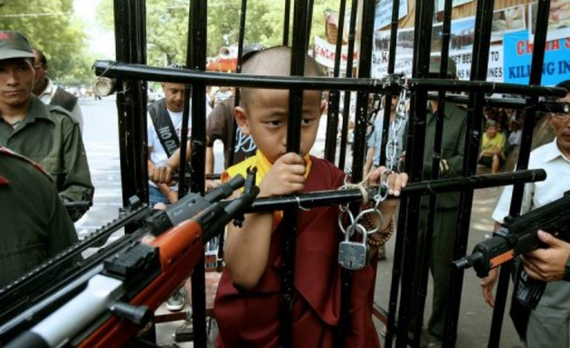 A Tibetan boy dressed as the Panchen Lama takes part in a mock action during a protest in New Delhi in 2011. AFP

5. China wants to legitimize its illegal rule in Tibet through him.
Beijing's aim is to repeat what they have done with the Panchen Lama. In 2007, the atheist Chinese Community Party enforced a so-called "Order No. 5," a law that allows its leaders to directly interfere in Tibetan religious affairs of recognizing the reincarnations of Buddhist lamas. This is an attempt to exert political and social control over Tibetans through the religious institutions, the center of Tibetan life. Tibetans strongly opposed Order No. 5. Given that His Holiness the Dalai Lama turns 80 this year, Beijing has already started the debate over the next Dalai Lama. Surprisingly, Chinese leaders recently criticized the Dalai Lama by saying he had no right to abandon his reincarnation. On the one hand Beijing is waiting to use the political influence of the Dalai Lama on the Tibetan people by claiming the right and legitimacy to choose the next Dalai Lama through its state-appointed Chinese Panchen Lama and by the laws of "Order No. 5". On other hand, His Holiness Dalai Lama dissolved his political power in 2011 to the elected democratic leader of Tibet and has made it clear that the Tibetan people will decide the fate of the Dalai Lama institution, not the Chinese government.

Chinese leaders fail to understand the faith of the Tibetan people in Buddhism and the basic relationship between a disciple and a lama. In Tibetan Buddhism, choosing one's own lama is by the will of the disciple and faith in the enlightened one who shows the right path. An oppressive ruler by using force may able to control the physical body but it cannot control the mind and will of people.