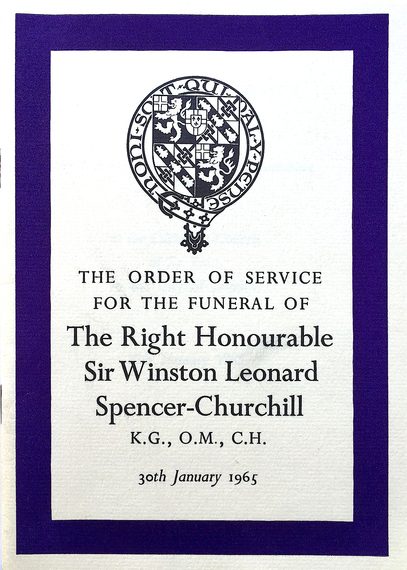 Winston Churchill's epic state funeral on January 30, 1965, following his death on January 24 at the age of 90, is an occasion that I have commemorated now for at least thirty-two years, since opening my Churchillian bookstore, Chartwell Booksellers, in New York City in 1983. This year, with the 51st anniversary approaching, I found myself searching for something new to say. And then it hit me: Churchill's passing and that widely-televised funeral launched the market for all things Churchill. In other words, the loss of Winston Churchill put me in business.

Churchill's death propelled this pastime into another dimension. Commoners began to collect his books in earnest, along with the souvenir collectibles produced by his commercially commoditized mortal exit. Authentic bits and pieces of Winston Churchill's life also began to land on the auction block with increasing frequency, though with relatively little fanfare and with far greater dignity than the relentless marketplace of the internet allows for today.

Some years ago I purchased at auction, largely for my own edification, a small collection of letters, commencing in August 1965, between Lady Clementine Churchill's then-secretary Grace Hamblin and a Mr. Hodgson, in the employ of the gallery and art appraisers, Pawsey & Payne. The letters solicited a valuation of Winston Churchill's library at Chartwell and assistance in selling surplus books from it on behalf of the Churchill family, including "a vast number of American editions of all Sir Winston's works."

The first major book catalogue of Churchill's works and related ephemera is generally acknowledged to be the celebrated Mortlake catalogue, issued by the distinguished Charing Cross Road book dealer Harold Mortlake (from his new premises at 24 Cecil Court) in 1969: 144 pages, 1,580 items, including "no fewer than Nine Inscribed Presentation Copies." The price for the collection was £5,500. The catalogue was sold "en bloc" to the University of Illinois in the summer of 1970.

I do believe that the arrival of Chartwell Booksellers in 1983, at the very least enhanced the attractiveness of collecting Churchilliana. What really kicked things into a higher gear was Sotheby's "Political Sale" in London on July 15, 1998, which notably hyped a stellar assemblage of Churchill-related rarities, flogging them for prices never before realized. The 21st Century correlary to this auction gold rush was the recent "Daughter of History" sale at Sotheby's London on December 17, 2014, in the wake of the passing of Lady Mary Soames, Churchill's last surviving child. This auction brought to market personal property belonging to Lady Soames including a quantity of her father's finest and most beloved paintings. The resulting bidding frenzy sent prices for every book and object in the sale skyrocketing, with many of the paintings soaring beyond the $1-million mark.

The aftermath of this blowout has been of increasing concern to me. Blood has been let in the oceanic Churchill market and it has brought out the sharks. Ever since the "Political Sale," I'd seen a steady increase in fraudulent Churchill "merchandise," abetted by the launching of eBay in the late 1990s -- in my opinion, the world's largest fencing operation for bad forgeries. Some years ago I had a customer offer me her collection of more than a dozen "signed" Churchill first editions, virtually all of them acquired on eBay. I had to inform the poor woman that every one of the signatures was forged and (I kept this to myself out of kindness) not even especially well.

In 2011, I assisted my friend and colleague, Pom Harrington, owner of London's esteemed Peter Harrington Books, in nabbing a British autograph forger of daunting skill and ambition named Allan Formhals, who was flooding eBay, and the Churchill world in general, with forgeries of every shape and description. Pom and I had become increasingly vexed by what we saw as a dilution of the Churchill name by fakes. Formhalls, it turned out, was buying up old Churchill books, old photographs and plain old sheets of paper and affixing Churchill's signature to them endlessly. Pom was able to interest a detective at Scotland Yard in the case. After some elementary sleuthing (Formhals already had an Interpol profile as an art forger), Scotland Yard banged on the suspect's door and caught him red-handed at home in Hampshire, surrounded by pots of ink, pens and piles of cheap Churchilliana ready for signing (as well as materials for other literary and fine art targets whose signatures he forged, including Joseph Conrad, T.S. Eliot and Picasso).

Formhals was brought to Crown Court on 16 criminal charges of fraud and convicted on 10 of them in December 2012; sentenced to 10 months in prison after a jury trial.

The temptation to "exaggerate," if not lie, has become financially irresistible for more and more sellers. Recently, I was egregiously misled about a potentially valuable piece of Churchill property offered to me for sale at the highest levels of the Churchillian food chain. Now comes word of "Churchill's yacht" being put up for sale in France for €2 million. Churchill never owned a yacht. The spurious claim that this luxury boat, christened "Amazon," had been built for him in 1936, is a fabrication. Churchill loved to sail, and as First Lord of the Admiralty quite monopolized the Admiralty yacht, Enchantress, during the run-up to the First World War. Churchill, however, was in no financial position to buy a yacht of his own in 1936 when, mired in his "Wilderness Years," he flirted with bankruptcy. For all of his life, Winston Churchill yachted solely as the cosseted guest of rich yachtsmen like Aristotle Onassis, whose vessel, the Christina O, kept Churchill afloat in his dotage.

News of "Churchill's yacht sale," overseen by the seemingly legitimate Coldwell Banker of France and Monaco, and wildly overtouted by the yacht's present owner, a French architect named Mireille Huet, was widely covered by online media outlets around the world over the past two weeks, including The Telegraph and The Mirror in the U.K., Paris Guardian in France and (of course) Fox News here. All of them really should have known better. Do news organizations ever fact-check stories anymore, or are press releases merely uploaded, defacto, as facts?

The impending anniversary of Churchill's funeral -- one of television's first international media events -- impels me to ponder this question with both alarm and resignation. Authentication is the essence of my industry but, alas, it is of dismissable value in our current culture. Still, as Churchill himself said in his timeless "Finest Hour" speech of June 18, 1940, "I see great reason for intense vigilance and exertion, but none whatever for panic or despair." At least not yet.
~