The last six weeks of the year are a make-it or break-it period for some relationships. Stressful days at work, increased pressure to be nice, and the shortest, darkest days of the season conspire to work peoples' nerves until they are raw. While many theatre companies look to this period as a time to cash in with holiday fare that has a proven track record at the box office, unless you're in a 12-step program it's rare to attend an evening devoted to severely dysfunctional relationships during the holidays.

Like several other theatre companies focused on developing and showcasing new work by Bay area playwrights (Playground, DIVAfest, Left Coast Theatre Company, the SFOlympians Festival), for several years the Playwrights' Center of San Francisco has been presenting an evening of its best 10-minute plays under the umbrella title of Sheherezade. Because 2015 was the last year in which PCSF will showcase its short plays in this format, the program was appropriately titled Sheherezade's Last Tales.

Two obvious themes dominated the evening: coping with grief and struggling with relationships. Sometimes examining such topics in a terse 10-minute play helps to keep playwrights focused on telling their stories within a tight time frame. With a simple unit set designed by Ellen Chesnut, the following plays proved to be especially moving.

Directed by Laylah Muran De Assereto, Rod McFadden's opener (The Stuff We Keep) examines a family trying to sort out the pieces of their father's life after his death. With boxes for materials to be kept, donated, or discarded, the man's two adult children are dancing around issues of blame and family resentments.

Julie (Alexaendrai Bond) is the older sister who left home in pursuit of exciting personal and professional opportunities. After her heart was broken and her career choices failed to materialize, she remained in New York, struggling to find herself. Although she always intended to make the trip home to visit with her family, she never really got around to it until after her father died. Having missed his funeral, she tries to assert her seniority over her brother, Bob (Louel Senores), who has stayed at home and is much more attuned to their mother's emotions.

While cleaning out his father's possessions, Bob comes across a packet of love letters from a woman with whom his father had obviously had an affair. When he shows them to Julie, she quickly becomes determined to confront their grieving mother with "the truth" of her failed marriage. Despite Bob's protestations, she's like a dog with a bone in its mouth -- until their mother (AJ Davenport) comes down to the basement and tells her children now nice it is to have them together again. 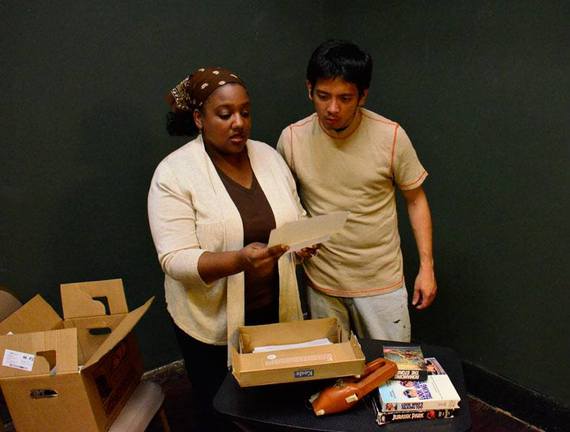 Alexaendrai Bond and Louel Senores in a scene from
The Stuff We Keep (Photo by: Colin Hussey)

Bill Hyatt's play, How To Make A Video, featured Amber Glasgow as Janie, a pregnant young woman struggling to get Helen (AJ Davenport) to record a video message for her grandchild-to-be. Because Helen has been undergoing chemotherapy and is not sure how much longer she will live, she's not feeling particularly cooperative. The fact that her son (the father of the child waiting to be born) recently died, does not make the situation any easier for her. Under Adam L. Sussman's direction, Helen must wrestle with her basic distrust of Janie and any questions that remain about the cause of her son's death. 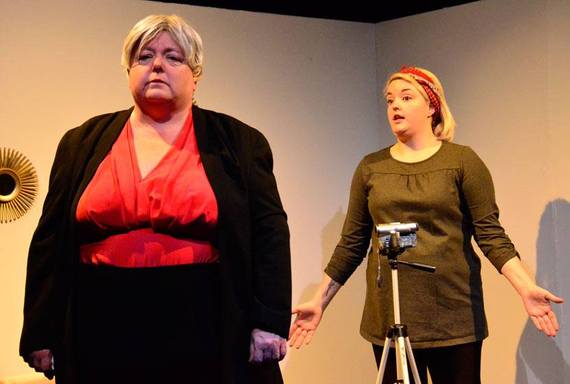 AJ Davenport (Helen) and Amber Glasgow (Janie) in
How To Make A Video (Photo by: Colin Hussey)

Directed by Laylah Muran De Assereto, Patricia L. Morin's play (A Clean Well-Lighted Park Bench) revolves around the conflicted Saul (Brian Levi), who killed his elderly wife because she wouldn't stop talking but now misses the sound of her voice. As he sits on a park bench, a young girl (Amber Glasgow) tries to mug him.

Older and wiser than this kid, Saul can't make her understand the value of staying in school. When she puts the gun to his head and threatens to shoot him, she's such a clumsy, incompetent thug that he has no trouble taking the gun from her hands. After she runs away, Saul is left on the park bench, hoping that someone with enough emotional fortitude will arrive to put him out of his misery. As Scarlett O'Hara famously observed: "Tomorrow is another day." 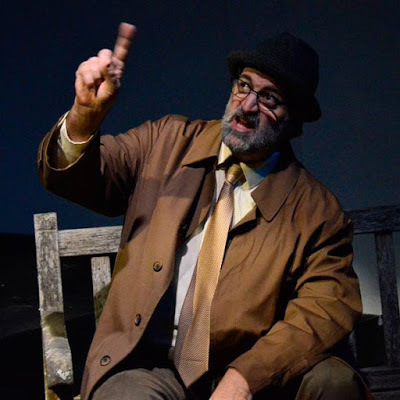 Grieving is not always about someone who has died. Madeline Butler's play, A Comfortable Life, begins as two idealistic physicists/political activists are hurriedly rolling up their sleeping bags and preparing to split up so that it will be harder for the FBI to track them down. Despite their best intentions, the bomb designed by Kat (Amber Glasgow) and Matt (Louel Senores) killed a guard when it was detonated and they must now run for their lives. 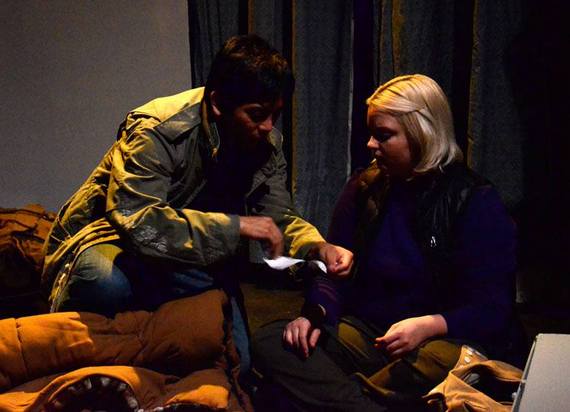 In another area of the stage, the audience sees an elderly man and woman undergoing couples counseling. Although Ruth (AJ Davenport) and Fred (Brian Levi) are trying to save their marriage, Ruth has had trouble opening up and sharing her emotions. Matt explains to their counselor, Alison (Alexaendrai Bond), that Ruth's family died many years ago and, even though she enjoys her work at the library, she doesn't really have anyone other than him to confide in. 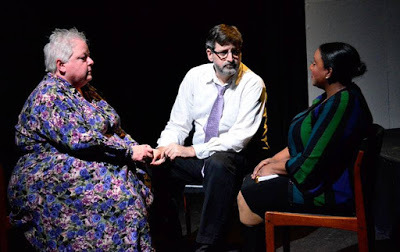 The scene shifts to Ruth's workplace where an elderly man approaches her, asking for some help with a book. He places a piece of paper in Ruth's hand which contains the heart he drew 40 years ago and then tore in half with the promise that he would somehow find his love and they would reunite. To Ruth's shock and surprise, a much older Matt (Rick Homan) has finally succeeded in tracking down the woman he knew as Kat.

Matt may be eager for them to pick up where they left off with their relationship, but Ruth has a new name, a new life in Vancouver, grown children, does volunteer work in her community, and is not sure how to cope with his reappearance after all these years. Poignantly directed by Adam L. Sussman, Butler's play depicts lovers trapped in a situation few would dare to imagine or wish upon themselves.

Louel Senores took on one of the evening's most challenging roles in Carol S. Lashof's tender two-hander entitled By Any Other Name. The setup is unique and quite timely.

Jeanette (Amber Glasgow) and her lover, Sharon, were two lesbians happily living together who seized the day when they were finally able to get married. Shortly afterwards, Sharon began to express doubts about her gender identity and began to transition to a male identity. Not only did she keep her feelings to herself while learning about what it means to be a transsexual, she chose a name (Steve) which Jeanette thinks embodies the worst characteristics of the male ego. 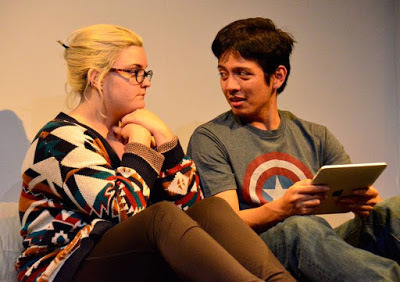 Amber Glasgow and Louel Senores in a scene from
By Any Other Name (Photo by: Colin Hussey)

While Steve has never doubted his love for Sharon (or his desire to have a family), Sharon is feeling lost and hurt about having been left out of the process of redefining their family. As she struggles to understand what has happened to their marriage, she also wonders if perhaps her spouse would consider changing his new name to something more palatable. Like, perhaps Stan? Adam L. Sussman directed this challenging 10-minute play with an acute sensitivity to the questions it raises.

Two short comedies added a great deal of levity to the evening. In Steven Hill's play, New New Economy, the unemployed Roger (Brian Levi) awakens one morning and thinks he sees the face of Jesus in his wrinkled gym socks. His girlfriend, Julia (Alexaendrai Bond), disagrees and resents the fact that Roger's latest brainstorm is going to make her late for work. Roger thinks they could charge people admission to see the image and make a killing in today's new new economy. Julia thinks he's a deluded manchild who might need to find another place to live (as well as someone else who can put up with his fantasies). Although Adam L. Sussman directed this piece quite well, there was less material to work with other than an hysterical middle-aged man.

By far, the best comedy of the evening proved to have the strangest title. Lorraine Midanik's imagination runs wild in Sparse Pubic Hair as two senior citizens meet up for a coffee date after Kenneth (Rick Homan) has answered a classified ad posted by Mildred (Miyoko Sakatani). At 63, Mildred is crystal clear about the fact that she is seeking a sexual relationship with someone no older than 60. Kenneth claims to want adventures (which, in his case, mean a trip to a museum or a movie date) and has lied about his age (he's really 75). 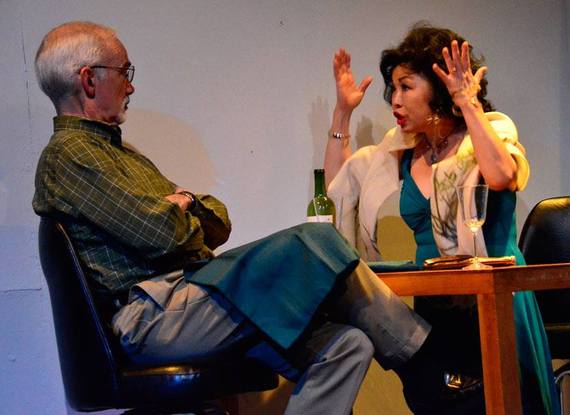 Rick Homan and Miyoko Sakatani in a scene from
Sparse Pubic Hair (Photo by: Colin Hussey)

These two have a few secrets up their sleeve. Mildred is taking a class on how to be a clown and admits to having very little pubic hair ("At this age, it's like a free Brazilian"). Kenneth has neglected to bring his medication for erectile dysfunction and is not sure he can proceed without a boner pill.

Since they can't go to Mildred's place (because she lives with her daughter's family), Kenneth sarcastically suggests that they try something adventurous -- like having sex under the table in the cafe. Finally, he suggests getting a room at a nearby Hyatt. As they slowly start dancing in each other's arms, this unlikely duo (Ken keeps insisting that Mildred stop leading) manages to trigger a spark between them. Midanik's play was lovingly directed by Laylah Muran De Assereto.

I often find evenings consisting of a half dozen or so 10-minute plays to be as refreshing and low-risk as a meal consisting of tapas or dim sum. What I particularly enjoyed about Sheherezade's Last Tales was witnessing a collection of rarely seen characters placed into trying circumstances.